END_OF_DOCUMENT_TOKEN_TO_BE_REPLACED " /> Dimpled Lexus LS 460L to Debut at U.S. Open | Lexus Enthusiast
Menu
Log in
Register
You are using an out of date browser. It may not display this or other websites correctly.
You should upgrade or use an alternative browser.

Lexus will have a one-off LS 460L to show at the U.S. Open in Farmingdale NY next week, having commissioned a full-body cover designed to look like the surface of a golf ball.

Lima Ohio reports on the story behind the vehicle:

It all started with mailboxes. Brad Smith began making and selling mailboxes that look like a giant golf ball in October. At the PGA Golf Show in Orlando, Fla., in January, representatives of Lexus asked if he could put the same surface on a car.

Smith said he might be able to do it and contacted his friend Rick Davis, who worked with him at Accubuilt in Lima for 10 years. Davis’ son, Matt, had worked with a company that had some experience with a plastic that might work.

While Lexus refers to the “firm” that is doing the project, Rick Davis laughs at the term, pointing to the two-car garage outside his home, where all the work was done. 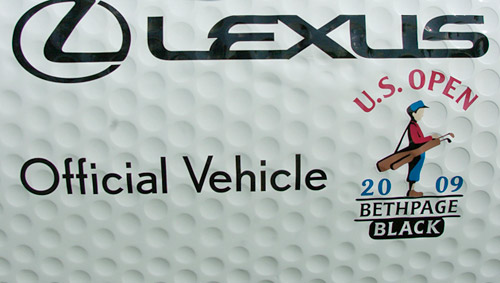 According to the Smith, they didn’t get a chance to see if the dimples made the LS 460L any faster, but there was a story earlier this year about a company claiming a similar surface could reduce increase MPG by as much as 20%.

@Peter: well Ive been reading every piece of information I can get on aero dynamics and fluid dynamics since I seen the myth busters episode. From what I seen is that every part of the car that has a air flow over it would benefit from this because just the surface of the car creates an abrasiveness the dimples reduce that. Though some parts need it more, like the shark skin suits in the Olympics and the window fins on the Mitsubishi Evolution rear window diffusers.(which kills the idea that the air is turbulent no matter what above 30 mph and that the shape of a car is different than that of a golf ball and that changes the physics of the air, the diffuser is track and wind tunnel proven so both are false assumptions) Most surfaces are either rising or falling so the dimples should help the air to flow better everywhere, like with the window diffusers, where it is closing the static air caused by the window and trunk recess and directs better air to the spoiler adding down force. I don't really know about vortex generators on fighter planes, but ill look into it. I know there's work coming out Cambridge University (I think not sure found the article once and haven't found the article again) on using fluid waves and to send the negative wave. In flight it send the correct height and space waves for the speed of the craft. In turbulence it almost totally cuts the vibration out. The professor claims that it will same like 60 percent in fuel cost on commercial planes. He talked that it has already been proven in small scale air and fluid tunnel test. If I sound ignorant I am, but hope what I said was correct if a little confusing.
@zachery: Also the Cambridge professor said that he wasn't sure how a membrane making counter waves to combat drag, surface friction, and cross winds was applicable to aircraft and large ships. He said that fixed ripples might be better for now until a stronger material is found, one that wont rip. As, a rip mid flight might cause a crash. He said that a engineered pattern that is engineered for a correct speed would save about 50 percent fuel if engineered for cruising speed. SO, the size and spacing of the dimples/ripples matters greatly. I also think that ripples might be more efficient than golf ball dimples. A golf ball is round and a car is linear. A golf ball rotates where a car doesn't, so it is change directions. A car keeps the same direction, so it's path is very predictable where a golf ball is very unpredictable. I think though that dimples may be more visually pleasing than ripples, but I would have to see a model of each. Might depend on the designer.
Driving the NX 450h+