No better time than a Friday afternoon to look back at one of Lexus’ most successful marketing campaigns ever — the still impressive Something Wicked This Way Comes commercials for the 1998 GS 400:

There were also two print ads: 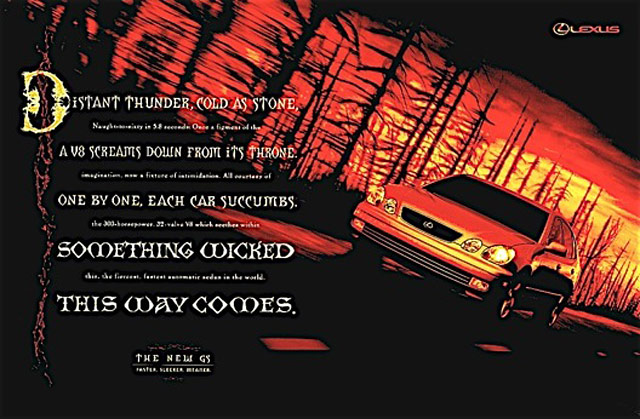 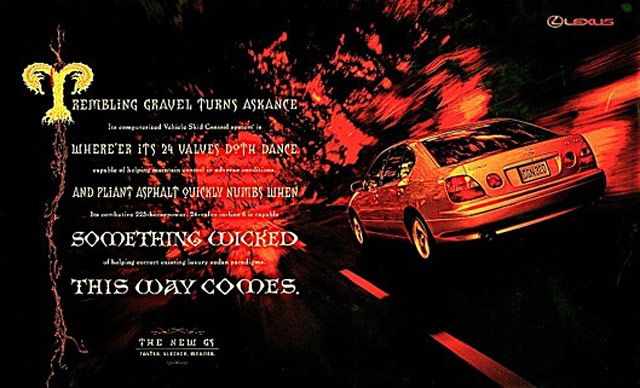 The second-generation GS had a huge impact on how people perceived Lexus, and this marketing campaign played no small role in that attitude shift — this quote from Bob Garfield of Advertising Age is a perfect example:

…pay close attention to the Shakespearean “when something wicked this way comes.” The line, embellished by lines of Mock-beth, appears in every spot, announcing for a dubious audience a Lexus sport sedan that for once is not predictable, insulating, sluggish and tame. This one is not only fast, these ads suggest, it has a touch of evil.

The organ music in the minor key does nothing to undermine that impression, nor do the image of the fallen leaves igniting and the Lexus GS 400 speeding through the woods leaving a conflagration in its wake. The car is nearly as striking as the ads. The claim of monstrous performance is communicated to a fare-thee-well, and the listless, vanilla Lexus is finally imbued with a fearsome character with which to battle the brawny German competition.

No doubt these commercials (and the 2GS) are on my mind due to the imminent arrival of the fourth generation GS. Could this new model create a similar effect? Sure, it’s only the early days and there’s still so much left unknown, but I have a great feeling about this car — what do you think? Can this new GS bring back the glory days of the original GS 400?

I must say, the best Lexus ever!
This car was awesome and still the best today.  The car is still a head turner.  The original GS beat out the old and current M5 straight up!
krew, would you happen to remember the LS 430 (or maybe LS 400?) commercial with some sort of old-school Italian song? I think the song was in English, but it definitely had an Italian feel to it. I remember asking in a forum what the song was, but I can't remember what the dang song was.

This GS set the benchmark for the industry, Mercedes started copying the GS design for their E-Class sedans.
I remember each and everyone of these commercials and ads. I think that the 4th generation GS should be priority with Lexus and their spending of marketing dollars.  If Lexus creates a spectacular array of advertisements to reach the over all market they will have a chance to capture the market the way they did in the 90's. Come on Lexus now is your chance......;don't stop now and carry through with all new generations of other models.
I doesn't wanted this GS400 ... because I've a much better choice , the Toyota Aristo V300 Vertex Edition ! Even though it's powered by just a 3.0-liter straight-6 Twin Turbo engine , but due to it's a Turbo engine ... making tweak on ECU & get 400hp to 450hp , you'll able to achieve 300km/h in a Aristo .
the fastest automatic sedan? really? dayyyum! talk about setting the benchmark in 1998!
Hey have you guys seen new promo line for the new 2013 on lexus.com it says.... From this car forward, senses will be heightened.From this car forward, pulses will quicken.From this car forward, Lexus will be redefined forever. I can dig this
The problem is after the 90's, Lexus saturated their lineup, the GS, ES, LS and even IS are all tailored towards the 'comfort' segment..
Awesome commercial,waaay better than boring european commercial about cars. Being italian I didn't know about it cuz as usual,Lexus doesn't make any commercial in Europe so it's the very first time I see it. I hope they'll find to make a very remarkable commercial for the 4th generation wich is fundamental
I own a GS400.. When I first got the car the amount of power it had shocked me. It hits you hard and thows yopu back in your seat. The car is a real sleeper. The engine and transmission are perfect and whole damn car is just damn good. I love driving it and smoking the rear tires when ever I feel the need to... combine that with rock solid build and great looks the car is awesome and it won import of the year. The ISF was N O T the first performance Lexus. Sorry buddy.
To be honest... with the way the automobile has been heading and the importance of MPG and efficiency, I doubt the new GS will be anything like the V8 GS400 . . that is unless Lexus make the GS-F. I read in a review that the GS400 had better breaking then a certain Ferrari ! and I believe them my car drops on a dime. My only issue I had with the GS400 was that beside the badge you cannot tell it ANY diff from the GS300... the two car are so different Lexus should have made the GS400 look a bit different from the 300.
The GS400 at the time also set record for the Nurburing time for the fastest sports sedan.  The new GS will break it again!!!!
I agree with those who remember how great this car is. No doubt one of the best Lexus ever. In my opinion the only Lexus that really hit hard the BMW e39 in respects to handling capabilities and overall performance. But this GS sports sedan was just so much refined in terms of balance between refinement, confort and sportiness. Great tribute to a great car that I hope the new 2012 GS will honour!
If it wasn't for the 1998 GS we wouldn't have the sedans we have today.  The 1998 GS paved the wave for today's  sedans, this was the sports sedan that started it all.  All of German sedans all have a bit of the GS400 DNA embedded in them,
Are they re-releasing this?  If so when is the productions date?