END_OF_DOCUMENT_TOKEN_TO_BE_REPLACED " /> Lexus Electric Supercar? | Lexus Enthusiast
Menu
Log in
Register
You are using an out of date browser. It may not display this or other websites correctly.
You should upgrade or use an alternative browser.

According to Motor Trend, Toyota President Akio Toyoda has signed off on the development of a Lexus electric supercar:

The car is expected to produce more than 500 horsepower and would sprint from 0 to 60 mph in around 4 seconds.

The car is expected to produce more than 500 horsepower and would sprint from 0 to 60 mph in around 4 seconds. Like the E-Cell, the Toyota is expected to route power through four electric motors, one at each wheel. It will also incorporate a switch that allows drivers to select between driving programs such as comfort, sport and super sport, thus permitting drivers to regulate battery use.

It’s expected to debut around 2015, and we are first to reveal how one artist in Japan sees the as-yet-unnamed vehicle as it might look attacking the Nurburgring in Germany. The large grille and air intakes beside the headlights are viewed as critical to provide sufficient cooling for the electric motors. The vehicle would reportedly borrow undisclosed know-how from Tesla and utilize aerodynamic expertise gained from the Lexus LFA project.

With the Tesla partnership already moving ahead full steam, this rumor wouldn’t be a total surprise — except for the fact that it suggests this will be a new vehicle instead of an electric version of the LFA. Considering that both Merecedes & Audi have shown electric concepts of their supercars, it suggests Lexus will be trying a different direction.

Now, tt’s always my tendency to look in the SC’s direction any time a new sportscar is mentioned, and it would fit with my belief that the new partnership with Telsa will produce the Sport Coupe’s third generation, but it’s doubtful the SC would be positioned against the Mercedes SLS E-Cell & Audi R8 e-Tron — however, it would be suitable competition to the rumored Audi R4 e-Tron, not to mention the Tesla Roadster.

Plenty of room for interesting speculation, here’s another angle on the Holiday Auto illustration: 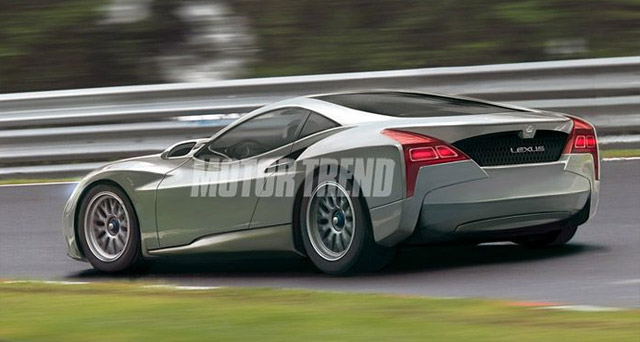 WOOOOWWWWWW MASSIVE DESIGN!! :-D:-D;-)
Oh Lord that's a beauty. PLEASE make it the next SC. Conveniently, it debuts around the same time. or an LFE.
The design is... um... who do I express it... Yawwwwwnnnnn*, unoriginal, if not also ugly. I'm just impressed at the big strides and confidence automakers are in accomplishing and actually selling these vehicles; I guess it has something to do with feasibility when selling to the rich. lol
Signed off? So it's confirmed to be built?!
This is interesting news. I hope this is will be an electric LFA though, not an electric SC. I think Lexus would do much better building an electric supercar to compete witht he E-cell and E-Tron rather than building a Tesla competitor. Maybe i'm wrong, but is it not possible that the plug-in test mule we saw earlier could have been the electric LFA?
What good is 500 hp if you can't hear them? I'll stick with my MR2's nice and noisy 140 horses,thank you very much.
The front similar to the Infiniti Essence
for sure the NG -SC
@jesseps: Believe it or not i am sure that rendering is out by toyota them selves and that car 'll not only be the NG-LFA (2G) or NG-SC as i said above (3G) but it 'll be the NG Lexus Finesse design and the car above after reading the post from motor trend and open both pics of it and LFA am sure it is the NG-LFA see those posts it said that the 3G SC 'll be a convertible 2+2 Your text to link here... Your text to link here... Your text to link here... and see that post Your text to link here... which is definetly say what i wanna say
It's good to see Toyota/Lexus is looking more toward into an all-electric vehicle. I think they have enough hybrids. They should start out bringing electric vehicle in the low-end segment, similar to Prius, to get public acceptance. Then expand onto other models. They're moving too fast by bringing out this totally new vehicle. I'm still waiting for the next SC, Supra, and MR2, which are long overdue. I admire Tesla for their innovation in all-electric system. Their new Tesla roadster can go from 0-60 in 3.7s and has 245mpc. That's impressive. It's good seeing Toyota is teaming up with Tesla.
Is there a lightweight way of dealing with radiation from all the electric components, or whatever it is that creates a huge mass of radiation in all-electric vehicles? I've read that the Tesla Roadster had some sort of thick lining or something.
Seriously though, even if this were only a quick sketch, I still think that the designers suck! Any little kid can imagine this out if not draw it even better.
Whoa.
Driving the NX 450h+