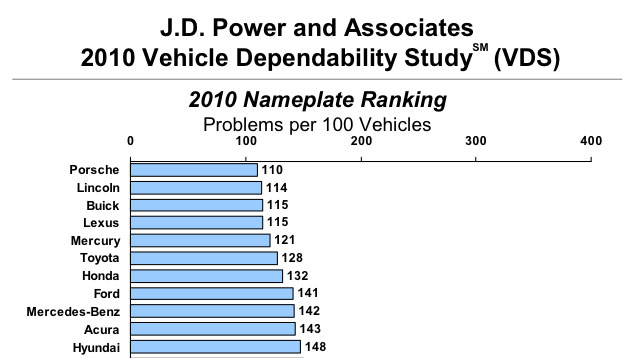 J.D. Power and Associates has released the results of its annual Vehicle Dependability Study (VDS) for 2010.  In the study, Lexus took third position in a tie with Buick, earning an average score of 115 problems per 100 vehicles.  Just ahead was Lincoln (114), moving up from seventh last year, and taking the lead was Porsche (110), moving up from ninth place last year. Lexus also won a segment award for the GX 470, which beat out the RX 350 for the Highest-Ranked Premium MAV. The ES 350 and LS 460 placed second in their segments to the Audi A6 and Cadillac DTS respectively. Survey details from J D. Power:

The study, which measures problems experienced by original owners of three-year-old (2007 model year) vehicles, includes 198 different problem symptoms across all areas of the vehicle.  Overall dependability is determined by the level of problems experienced per 100 vehicles (PP100), with a lower score reflecting higher quality.

Overall vehicle dependability has improved by 7 percent in 2010 to an average of 155 PP100, compared with 167 PP100 in 2009-a rate that is consistent with historical industry gains. In addition to the improvement in overall dependability, the rate of component replacement has also been reduced from 2009. Approximately 65 percent of owners indicate they replaced a vehicle component in 2010, compared with 68 percent in 2009.

Historically, Lexus has done well in the VDS, taking the top spot every year from 1995 to 2008, and ranking in the top three since 2009.  Lexus’ score for 2010 (115) is an improvement over 2009 (126) and 2008 (120).  With the 2010 VDS measuring vehicles purchased three years ago, this year marks the introduction of the 2007 LS 460 and ES 350 into the long-term survey pool.  Both models have a hefty legacy to follow, with the prior ES 330 having been the highest-ranked premium mid-size model and the LS 430 the highest-ranked vehicle among all cars in past editions of the VDS. The 2007 model year also represented Lexus’ highest-ever US sales total, with the luxury division gaining more customers than any of its quality rivals.

The 2010 VDS rankings further mark a shift in the survey leaders compared to 2009, when Buick and Jaguar tied for first, followed by Lexus.  The addition or removal of certain models in the survey reportedly had a significant effect on Porsche and Jaguar VDS scores.