END_OF_DOCUMENT_TOKEN_TO_BE_REPLACED " /> Another Look at Lexus’ IS-F Marketing | Lexus Enthusiast
Menu
Log in
Register
You are using an out of date browser. It may not display this or other websites correctly.
You should upgrade or use an alternative browser. 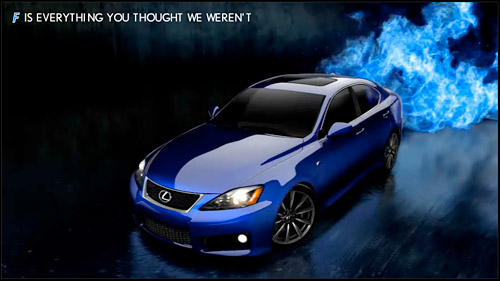 It was my supreme hope that with the introduction of the official Lexus IS-F website, we would see a change in direction in the way it was marketed, but it’s remained the same: Overly flashy Ultrasonic Blue Mica exterior color and the tagline F is everything you thought we weren’t.

Clearly, Lexus wants to emphasis the departure that the IS-F represents, replacing the brand’s staples of comfort and luxury for speed and performance. However, taking it at even a slightly different angle, does it also mean the IS-F will be unreliable? Obviously not, but it’s a murky proposition to suggest that the car is everything Lexus isn’t.

Even more, is it even true? Lexus officials, when quizzed about the car, have said “It will be more refined and comfortable, rather than out and out sporty,” and that the IS-F isn’t meant as an M3 rival. Talk about mixed messages.