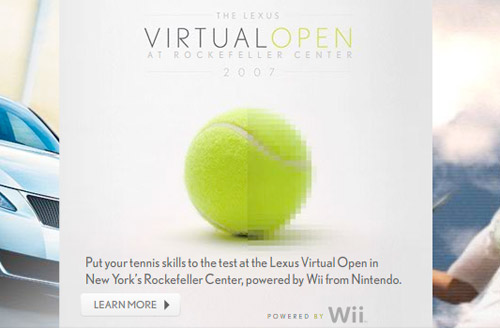 Lexus will be sponsoring a “Virtual Tennis Open” to go with its sponsorship of the real-life U.S. Tennis Open taking place next month in New York City.

The three-day virtual tournament will use the Nintendo Wii as the gaming platform, and will take place on a scaled down tennis court, pictured below: 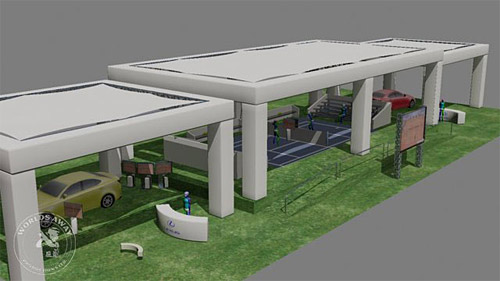 The winner of the tournament will receive a one-year lease of a Lexus IS-F and the opportunity to watch the actual US Tennis Open in Lexus’ luxury suite.

Tennis and gaming enthusiasts will take to the virtual courts at Rockefeller Center, in the heart of New York City, from 7 a.m. to 7 p.m., Sept. 4-6. Professional tennis player and ESPN on-court analyst Luke Jensen will instruct participants and provide commentary as they compete on Nintendo’s Wii console. For each serve hit during the virtual tournament, Lexus will donate $1 to the Andy Roddick Foundation (up to $30,000).

“As a sponsor of the US Open we created this event to bring the excitement of Flushing Meadows to Manhattan,” said Steve Jett, Lexus national marketing communications manager. “There’s nothing like the thrill of competing in the US Open, and while tennis enthusiasts may never experience the roar of the crowd and feel the courts beneath their feet, the Lexus Virtual Open at Rockefeller Center gives them the opportunity to get a taste of it–and win a one-year lease on a new IS F performance sedan, the same vehicle Lexus is awarding to the Men’s Singles Champion.”