Berto3818 said:
Is this going to be on the TTV6 also or just the hybrid?
Click to expand...

So far it seems hybrid only. As an LS500 owner now, I would consider this but not with the current infotainment system after seeing the new NX. A PHEV would be nice too but I don't see that happening in 2022.
S

At this point they should just work on a new LS, fix all the issues everyone complains about. They aren't going to have a good time after the new S just came out fresh with loads of classing leading techs. At the very least, I expect to see TTv6 to be retuned with slightly higher output, and another powertrain with hybrid system adding onto the TT.
B

I suspect the next model will have the TTV6 Hybrid. it will be a very nice sedan. i asked the question when the new model would come out and the consensous is 2025?

Berto3818 said:
I suspect the next model will have the TTV6 Hybrid. it will be a very nice sedan. i asked the question when the new model would come out and the consensous is 2025?
Click to expand...

If it will follow the regular lifecycle of the flagship segment which is 4 years initially then facelift for another 4 years for a total of 8 years, it will be introduced in 2025 as 2026 model year.
B

got it so it got a ways to go then. another 4 years with this cycle.

It's been widely discussed in this thread, but I've grown to feel like the 5LS was a bit of a beta for ideas, software and hardware Lexus wanted to try out and not so much of the "Here's a best in class execution that we feel good about for the next several years," like LSs have traditionally been.

Because of this and the car's lack of sales success, I feel like the 6LS will come sooner than we think. Potentially something like 2023 as 2024MY.
B

The only reason why I'm asking is because I'm seriously thinking about a 22 but if this is going to 6LS 23 or sooner than i will wait.
S

Berto3818 said:
The only reason why I'm asking is because I'm seriously thinking about a 22 but if this is going to 6LS 23 or sooner than i will wait.
Click to expand...

the 5LS was released in 2017 as 2018 MY, 3 years later we receive a facelift as 2021 MY so that is a 3 year cadence. I'm more likely to believe the next LS will arrive in another 3 years judging by this pattern. That's just my guess who knows maybe this is the last LS we get, seeing how Lexus is shifting focus away from all the RWD platform.
L

The more I think about it and drive my '18 LS, the less I want another LS500. I just can't get over what a slug it is off the line around town, it's embarrassing and dangerously unresponsive in certain situations. As a highway cruiser it's awesome, but this car is not intended to ever be driven around town and in stop-and-go situations. I realize the hybrid (non-turbo) motor will decrease some of that complete lack of acceleration but I guess I'd have to test drive to see if it's not dangerous anymore. LS turbo owners will know what I'm talking about. This is my first Lexus, time will tell if it will be my last.
M 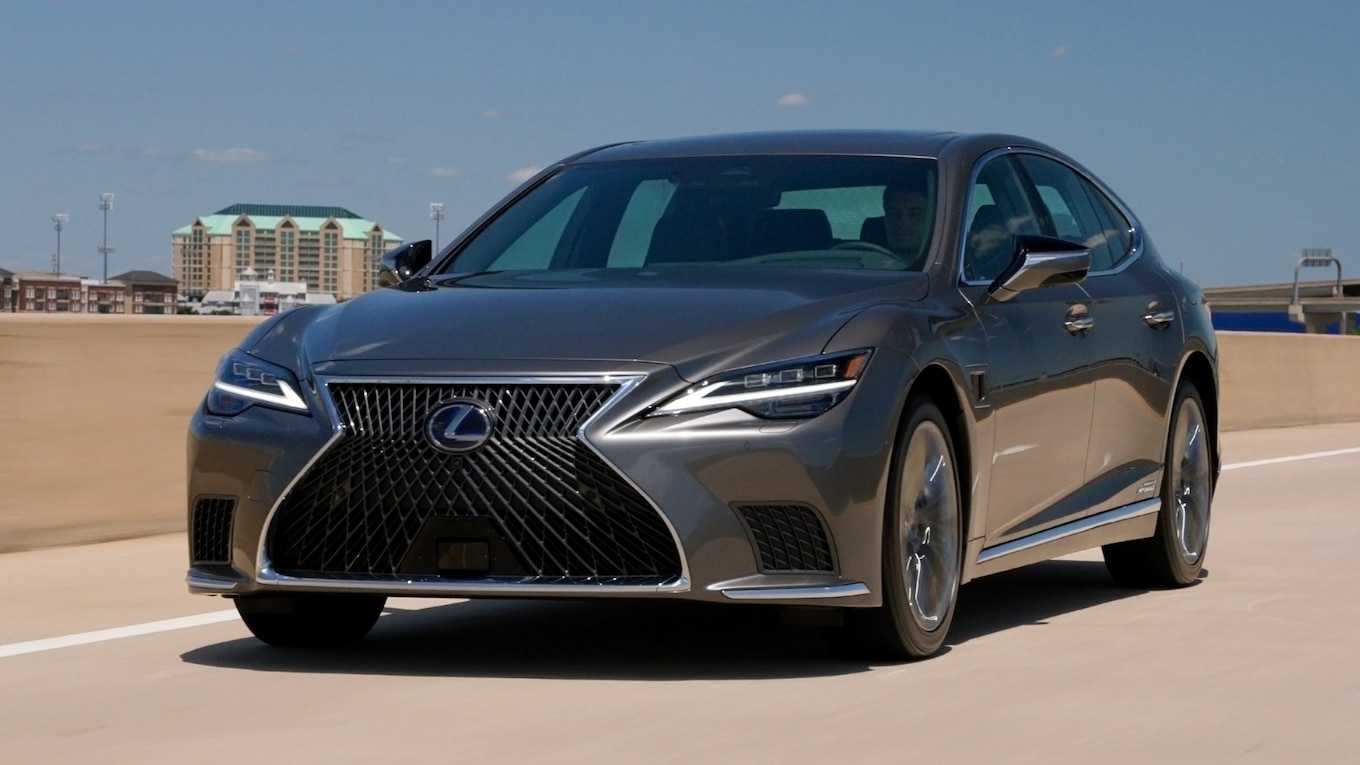 Coming soon to the LS, Teammate nails Level 2 autonomy and brings a reassuring amount of feedback that’s missing from Autopilot.

A great article on MotorTrend about Lexus Teammate. They had some nice words about it saying its a much more technically capable and advanced Level 2 system than Tesla’s autopilot.

Is Lexus late? Sure. Mercedes-Benz has offered similar capability to Autopilot for a few years now, including automated lane changes. But like Mercedes (which also trailed Autopilot), Lexus is coming in much better prepared.
Click to expand...

Every sensor has its limits, of course, but there's something reassuring about the multiple redundancy built into Lexus' setup, wherein overlap exists in the viewpoints of the Lidar, radar sensors, and cameras.
Click to expand...

So, How Does Lexus Teammate Work?​

The short answer? It works well. The longer answer is, it feels like a future-looking driver assist designed by Toyota. In other words, the system truly acts as a driver's partner and less like a carefree system a driver activates and simply tunes out from for a while. There is an abundance of communication from the car about where on the spectrum of involvement the driver is or needs to be in a given situation, too.
Click to expand...

In Teslas, the animated onscreen version of events surrounding the car are jerky, and nearby vehicles fade in and out of the Tesla's field of vision. In the Lexus LS500h with Teammate we drove, objects nearby were rendered smoothly and accurately on screen, inspiring more confidence that Teammate knew what was going on.
Click to expand...

As the Explorer was more or less even with the Lexus, we figured the car would crank the brakes and let the SUV cut in (likely taking the car following us by surprise) or, maybe, not see the situation developing and we'd be sideswiped. Instead, the LS500h deftly faded to the left and accelerated (we were traveling at less than our set speed at the time) past the wayward Explorer. It's what a smart human would have done had one been driving.
Click to expand...

I can’t wait to see this filter down into the rest of the lineup.

This is the Lexus way: not always first to market, but always one of the best (if not the best) in the market.

I was on the C/D forums under the discussion about the new Tundra, where a user posted this Consumer Reports reliability sheet of the 2018 LS. They claimed it received an overall 14/100 score for the reliability category. @Mhight 's experience with his dad's LS may not be as much of a fluke as we thought 🤷🏽‍♂️

I'd be curious to see the actual source data for this. I feel like if the 5LS was actually that bad we would've heard about it before 2021, and the folks here with direct Lexus USA connections would know about it. I definitely don't baby my LS - the MPG and tire wear could tell you - and it's been fine.
B

Ls isn’t getting nothing over for a while… I’m a subscriber to automotive news and it’s nothing for a long time.

Lemons may come from any automakers and any models. Even Toyota and Lexus is not immune to this.

If a model's sales are low, such as the LS, even a small number of lemons will be a high proportion of models on the road.

Does anyone here understand Japanese? What is Mizuno's (former chief engineer of GT-R) point of view between the two?

I was hoping the auto-translated captions would help, but I tried it and it didn't do so well.

In other news, my local dealer found a 2021 LS that meets my specs (Nightfall Mica exterior + Luxury Package, which there's apparently one of in the entire US). Vs. my '18 it adds the HUD and LSS+A (and of course all of the '21 updates like the touchscreen). It's currently being shipped cross-country, which apparently will take a few weeks.

I haven't driven the hybrid - my dealer doesn't actually have one right now.
W

Does anyone here understand Japanese? What is Mizuno's (former chief engineer of GT-R) point of view between the two?
Click to expand...

Only watched the end because I'm lazy. He's very complementary of the S Class' handling. He compares the feel of the 4 wheel steering to Nissan's HICAS system.

He says that the LS500 has been out a few years, and that it feels a little older. He praises the aero, the suspension setup and the noise suppression, which he says feel like they have been designed with care and are what we would expect from Toyota.

However, he still thinks the ride comfort and suspension setup on the Lexus could still use a little more work. This part I didn't understand fully, because it was a little technical, but he says that something about the front wishbone and camber setup in the Mercedes is more modern (a setup he says was first done in the GTR), whereas the wishbone and camber of the front wheels on the Lexus are an older style design.

Overall, he says that the whole of the S Class platform is filled with new technology and engineering (not just the fancy interior), and he says that he could feel this difference between the LS and the S Class very strongly on his drive. He hopes that Japanese cars can try hard and catch up.
You must log in or register to reply here.
Share:
Facebook Twitter Reddit Email Share Link