Status
Not open for further replies.

Marten said:
I don't like the rear; it reminds me of Hyundai Sonata. Overall, I think it looks much cheaper than the other flagship sedan. Compared with the S-class it has no presence and not elegant at all.
Click to expand...

I don't think the S-Class is some amazing design exterior wise. Its safe and predictable. Without the sport package it really lacks to my eyes. With the E and C class looking identical, that doesn't help. In regards to proportions, my goodness they did nail it there. No confusing this is a big time luxury car. No SWB here helps.

The S/7/A8 are handsome but predictable. The Quatrroporte just missed the mark. The Panamera is really sporty and a hatchback.

I think there is significant opportunity for the LS if its a design knock-out.

For me the XJ looks really incredible from some angles and really standard from others. It's handsome overall, and I really like the headlights, but it's not the kind of knockout Jag used to be known for.

White Beach said:
The article refers to Rolls Royce and Maybach as "super luxury" and says that although the debut of 5LS will a new chapter for Japanese luxury car, Japanese car manufacturers will still be unable to enter into "super luxury" segment.

And your guess on this article is largely correct. It says:

・the engine options will be 3.5 liter V6 hybrid and 3.0 liter turbo at the launch and fuel cell model will be added about a year afterward

・sales will begin in autumn next year with a price tag starting from around 10 million yen (about $100k) (, which is rather a big jump from 4LS which starts from around 8.5 million yen)

・mirrorless version will be standard! and physical mirrors will be an option!! (which I think is very unlikely. Indeed Japanese safety standards on vehicles was revised recently to allow mirrorless cars, but it will only be applied to the vehicles produced from June 2019)
Click to expand...

This is amazing, thank you so much for the translation! 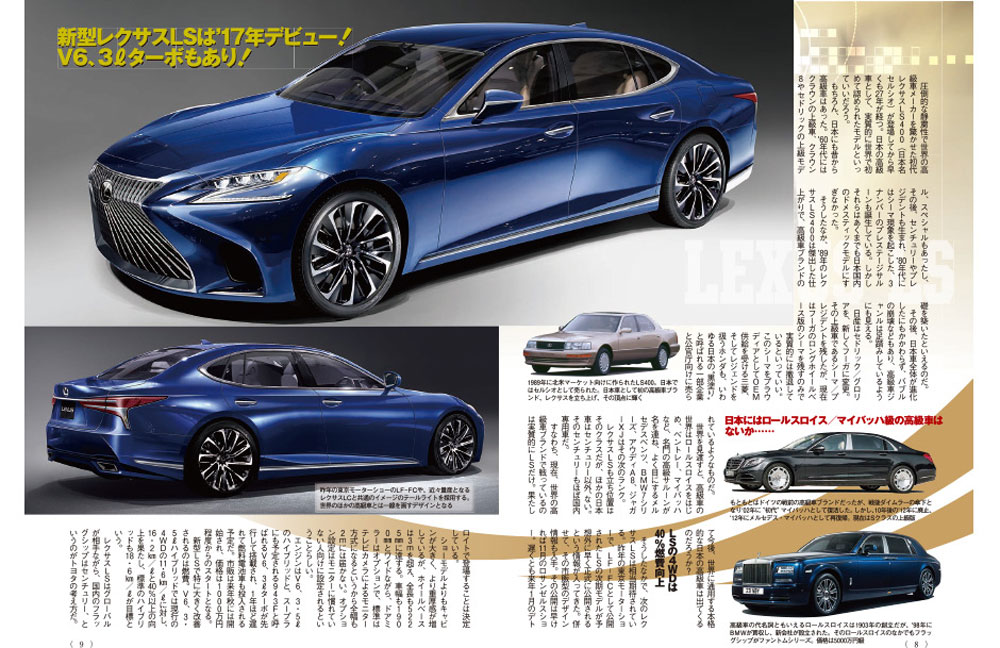 Big changes are coming to the flagship Lexus sedan.
Click to expand...

This is my favorite render! The only thing is the headlights; Lexus cannot use the GS offset DRL again - horrible. Everything else is spot on! I cannot wait to see what the actual LS will look like, but if it is anything close to this, I'll be happy.

I have to admit, this is my favourite rumor so far. The design looks really nice. Regarding the engines, I was expecting the LC engines move to LS; the new hybrid system with such MPG numbers looks really good too.

FINALLY the long overdue 6-cylinder forced induction engine is on the horizon! Can't wait for it to make its way into the rest of the lineup, especially the RC...

Excited about the new engines, but more so the likely design of the production vehicle. If I have one nitpick it's the rear section for which a combination of Camry, ES, and Azera pop in my mind.
A

Agree with everything but the LS F, The F Brand is a brand new company and it's no surprise that their vehicles don't perform as well as it's competition, even though it does in some cases. An LS F would be absurd, and that's why it should be made.

maiaramdan said:
@Carmaker1
and any of you guys keep asking about the ring spy shots for the LS
don't forgot that Toyota already own a good racing ring
Click to expand...

That is very much besides the point, as then what was the point of testing the LC500 and many other Lexus models there then? Even the LS 460 was tested there in 2005, it was deliberately being hidden.

Anyway, any LS discussion from me has ended for now. Not in the position to discuss this car publicly anymore (cannot wait!). Thanks everyone, bowing out from this thread for now (in the meantime).


maiaramdan said:
will really Lexus unveil the LS in next NAIAS???
we are around 3 months away and nothing appear from them until now !!!!!!
Click to expand...

Photoshoots are in progress IIRC, just wait a little more...


maiaramdan said:
@mikeavelli
you forgot the best car in this class for my opinion
the Jaguar XJ
i really love how it looks
Click to expand...

Ian Schmidt said:
For me the XJ looks really incredible from some angles and really standard from others. It's handsome overall, and I really like the headlights, but it's not the kind of knockout Jag used to be known for.
Click to expand...

Thank you both, appreciate that a lot as many have reservations for the X351 design. Problem is the replacement is very much in limbo due to infighting and inability to commit to decisions, so IDK.
Last edited: Nov 8, 2016

Excellent points Carmaker1 in your various replies. I sadly just don't have the time to fully reply to all your points. Besides we have discussed the 5LS here quite in depth. I will quickly mention, your comments about the S Class being seen at Toyota facilities a couple of years ago, combined with the lack of S Classes with public 5LS testing makes sense now. I think you're totally correct that Toyota did most of its S Class testing and comparisons in secret, and now with public 5LS testing underway, it seems they've carefully only shown the sportier competitors being benchmarked (in public). The S Class is the king of this segment, so it would make absolutely zero sense for Toyota to ignore that model. I knew there was a logical explanation for lack of S Classes seen as competitor benchmarks in the 5LS public test shots.

Also many thanks White Beach for the invaluable Japanese translation of the Best Car article!

Japanese scoop website Spyder7 has some new spy shots of 5LS. Spyder7 reports that it got a photo of (a part of) the sedan's dashboard for the first time. 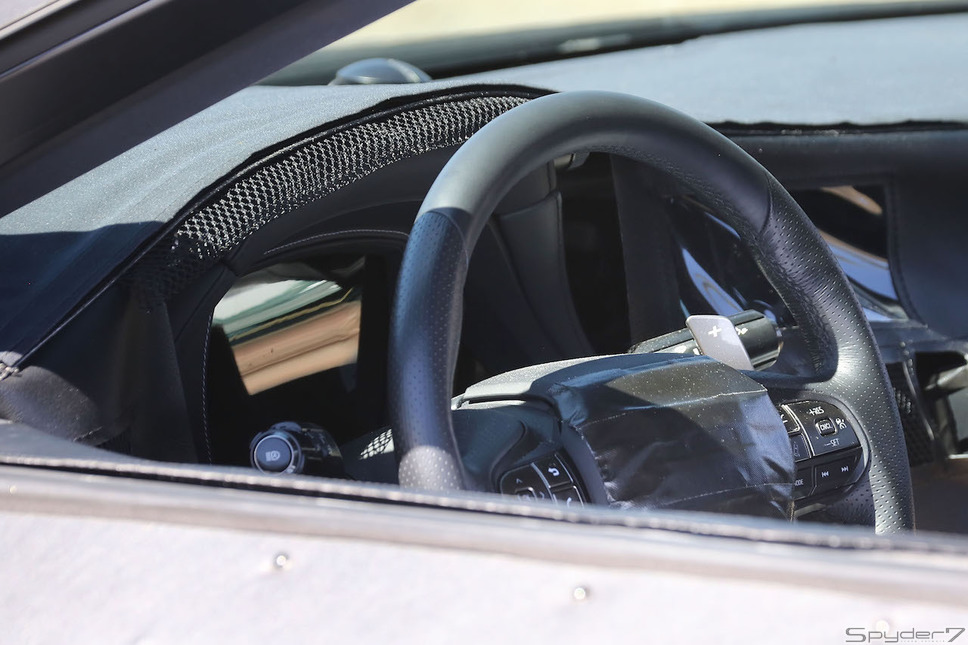 The points of the article are:
-one of the highlights of 5LS is the introduction of 3 liter V6 turbo
-5LS will have no side mirrors. Side mirror of camouflaged prototype are dummies
-Spyder7 caught the interior of 5LS for the first time. The steering wheel and its switches can be seen.
-world premiere will be in early 2017. LS F and fuel cell model will be added a year and two years later respectively

I personally think that side mirrors of the prototype seen in the spy photo can hardly be dummies. They are beautifully designed and far better than that of existing Lexus sedans.
Besides this article, there are actually a lot of media outlets these days which claim that 5LS will be mirrorless. Is it possible next year???

And the steering wheel seen on the spy photo is the same as the one in LC? If so, it's quite disappointing for me. LC's steering wheel is too sporty for LS and more than that, it looks cheap, especially compared to that of S class or 7 series IMAO. Especially the S class' wheel is just superb: both its elegant design and material are amazing IMO. 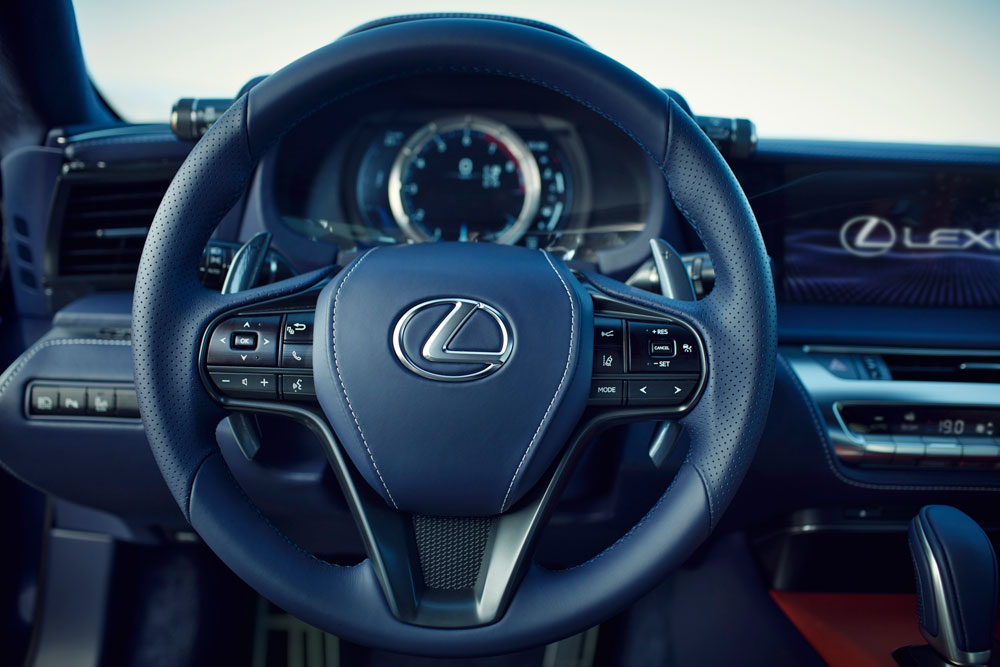 Just found another 5LS spy shots!!(in German. Can anyone translate?)
Lighter camouflage than ever! Long looog wait will soon be over! 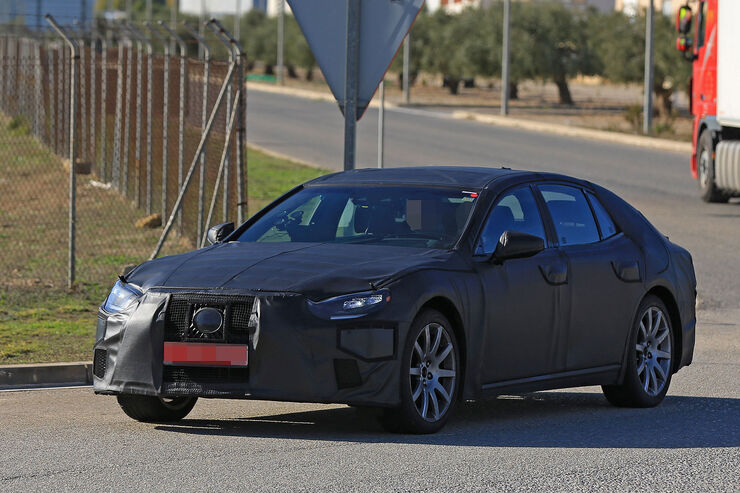 
And the steering wheel seen on the spy photo is the same as the one in LC? If so, it's quite disappointing for me. LC's steering wheel is too sporty for LS and more than that, it looks cheap, especially compared to that of S class or 7 series IMAO. Especially the S class' wheel is just superb: both its elegant design and material are amazing IMO.

I agree that the steering wheel looks quite disappointing compared to the competition with nice wood trim and brushed aluminum. The spy shots show a steering wheel that is too sporty for a full-size luxury saoloon. It would be okay for an F Sport model maybe, but if Lexus puts sportiness and sporty looks before luxury, that would be very disappointing for me. I also hope that the grille will not be mesh as stock. The mesh looks too sporty and it's only okay to be stock on a coupe like the LC. I also don't like the horizontal slats on the spindle grille either because they are way too thick and don't look luxurious at all (look at the new IS and GS). I think some vertical slats would look nice or if they are going to be horizontal, I think some thinner, chromier slats similar to the Nissan Cima or 3.0 IS would look the most grand.

White Beach said:
Just found another 5LS spy shots!!(in German. Can anyone translate?)
Lighter camouflage than ever! Long looog wait will soon be over!

Those headlights look very handsome and shockingly similar to the renderings that @Carmaker1 showed us! The taillights look a little bit weird and remind me of the Tesla Model S, but that could just be the camouflage. The spyshots look much longer than the current LS so this could mean that this is the LWB model.

It wouldn't surprise me if Lexus was just using an LC steering wheel as a dummy for now. No doubt that the LS steering wheel is going to be wood and leather trimmed.

Look at those front fenders, the long hood, long wheelbase and sloped roofline. This car is going to be much more dramatic than any LS before.

Status
Not open for further replies.