Lexus has been named the top automotive brand in the J.D. Power 2012 China Initial Quality Study.

The survey collects responses from new car owners in the first year after purchase, and then ranks the brands by the number of problems per 100 vehicles (PP100) — Lexus was miles ahead of the competition: 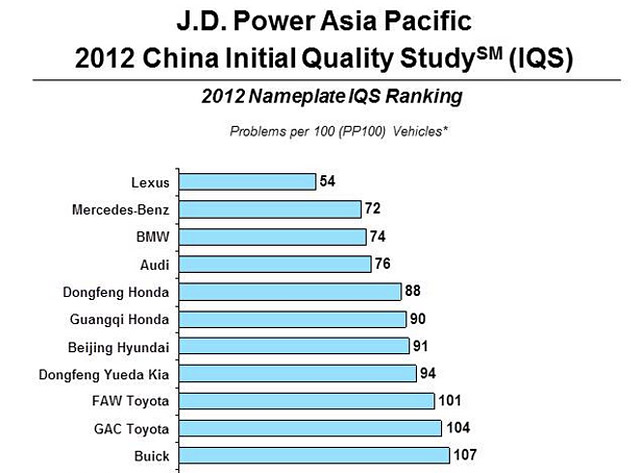 With only 54 PP100, Lexus owners were nearly three times less likely to experience problems than the average car owner in China — it was another dominant performance for the brand, who also took top spot in the American & Japanese Initial Quality Study earlier this year.

This is interesting! Lexus ranks so high even though China has such a bias towards German cars! I wonder how accurate this is compared to the survey in the US!

they also don't like japan so think about that
That is true too. I grew up in China when I was little. I just returned this summer, and I feel that the overall attitude towards Japan hasn't changed much. The two governments are constantly going against each other, and it certainly doesn't help when American intelligence tries to bug in. The thing is... The attitude towards Lexus is very interesting. A lot of people are well aware of the CT 200h at the moment, and many know that Lexus is a sub-brand of Toyota. However, Lexus itself does not seem to have much of a country identity. Similarily, many Americans think that Lexus is American or German.
Yeah even in Italy the larger part of italians think that Lexus is german! lol

Wow! Ze Germans are coming. Very surprised the Germans are ranking higher in ANY quality survey but a very sweet surprise indeed. Quality, dependability and fuel efficiency have been my points of criticism against German-made vehicles but they seem to be catching up to Lexus-slowly but still.
Driving the NX 450h+