END_OF_DOCUMENT_TOKEN_TO_BE_REPLACED " /> The Lexus IS-F: Coming to a theater near you | Lexus Enthusiast
Menu
Log in
Register 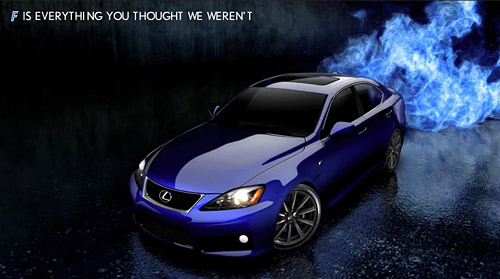 Rather than a national TV campaign, Lexus has decided to bring the IS-F to the big screen, using movie cinemas to advertise the new super-sedan:

Brian Bolain, national interactive automotive events manager, says the F campaign will not use national TV ads at all. He says the cinema focus was appropriate because in no other medium could Lexus be guaranteed delivery of a full, directional audio. “The dynamics of the vehicle have to come across. [With in-cinema ads] you can play with surround-sound [to show] that the car is gigantic.”

“It was very important that this creative look and feel nothing like traditional Lexus advertising,” he says. “Typically, everything we do is light, and very refreshing; this needed to be more aggressive and menacing,” he says.

Bolain says that although there will be no national broadcast ads for F, “dealers liked the cinema ads so much that they asked that we create a broadcast spot. We took three fifteens and glued them together to make thirty,” eliminating repetitive text and footage.

Each ad will be 15 seconds long, and will play between the other, longer advertisements shown before a movie.