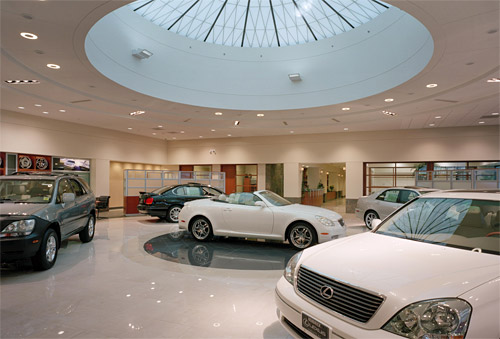 Lexus, which has focused primarily on the American market since its inception in 1989, has been attempting to grow into the global brand, yet the results have been mixed. The Detroit News has a very interesting article on this topic:

In some of the most promising, fast-growing markets such as Russia and China, Lexus is off to a roaring start.

But it has been slow to gain traction in key regions, including its home market, Japan, where the brand sputtered after a grand introduction two years ago. Lexus missed its sales targets in Japan in 2005 and 2006, and demand is only now picking up after the rollout of a redesigned flagship LS sedan.

The biggest challenge, however, is Western Europe, the world’s No. 1 luxury car market and home of the oldest premium marques. Last year, Lexus sold fewer than 37,000 vehicles in Europe — a market comparable in size with the United States, where Lexus sold 322,000 cars and crossovers.

Even more telling is the article’s accompanying graphic: 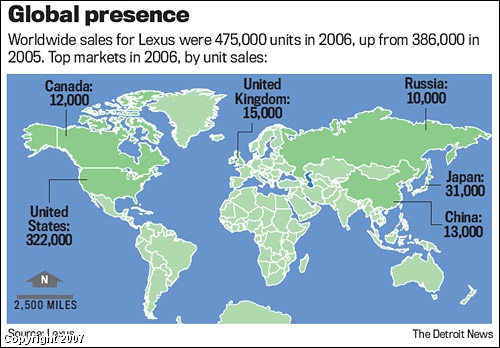 In the US, where Lexus is the best-selling luxury automotive brand, it’s easy to mention BMW, Mercedes and Lexus in the same breath, but this can’t be said of the rest of the world. It all comes down to conflicting viewpoints:

Americans prize comfort, reliability and attentive service — the hallmarks of the Lexus brand. The Japanese revere heritage. Europeans want innovation above all…

Quite clearly, any success in Japan is going to take time, building history is not something that happens over night, obviously. However, Lexus’ struggle in Europe is equal parts bafflingly/expected, for if these consumers look for innovation above all else, how is Lexus not more successful? Many points can be argued, but if Lexus is one thing, it’s innovative. Perhaps, rather than innovation, Europeans value the driving experience, which is the one area Lexus trails behind brands like BMW.

Therein lies the real issue, whereas an automaker like Mercedes has been able to straddle the line between comfort and performance (how successfully, of course is an entirely separate issue), Lexus’ main focus has always been comfort. Steps are being taken, considering the introduction of the IS-F, the upcoming LF-A, and the hint of a possible GS-F, but these cars have yet to be honestly compared to their peers. If anything, this performance line may be Lexus’ best hope in establishing a strong presence in Europe, but nothing is guaranteed.

As I mentioned previously, the Detroit News article is exceptionally detailed, and I feel as though I’ve only scratched its surface. Highly recommended reading for any Lexus enthusiast.