TLDR version: it's a very familiar NX just better. I have no problem owning one, but only the hybrid. Avoid ICEV models (250/350) if possible. And I would choose it over any competitor in the segment.

>> Exterior: best looking Lexus so far. I was not a fan of electronic door latch before but now I know it works well in reality. It's super easy to use but still I wonder, in case of an emergency and electronic failure, how would someone unfamiliar with this car open the door from the outside? I am very wary of this after seeing a recent high-profile LM300h crash in China. The power side doors failed, the car caught on fire and unfortunately the passenger was killed. This accident sparked a lot of online discussion on the safety of powered door systems and robustness of their mechanical backup.

>> Interior: I'm very satisfied with this new interior after getting terribly annoyed by the new Mercedes design yesterday. It has just right amount of tech, everything is in the correct spot, good mix of touch and physical control. There's just nothing that constantly requires my attention. The best way to describe it is "very Lexus". It feels familiar and that's the No.1 thing Lexus owners look for: the same car, just better.

>> Tech: the salesperson was very professional and explained me the entire LSS 3.0 system. One thing I've always got wrong is that LSS 3.0 is not equipped with front cross-traffic alert (FCTA) that warns you of cars coming from left or right. It is currently only available on the LSS A+ system on the LS. Instead the left-turn assist system in LSS 3.0 only protects you against oncoming traffic.

I would say the 9.8 inch touch screen is perfectly sized for my arm length. A 14.0 inch screen might be hard to reach in some spots. The standard sound system is also a surprise. It's good enough that opting for ML is not a must. It's way better than most standard sound systems on 2010s Lexus.

>> Comfort: I have mixed feelings. On one hand the ergonomics are great. Lexus has the best fake leather seat surfaces among all luxury brands. But the suspension is just too hard for American roads. And unfortunately AVS is only available on F-Sport Handling. Also sound insulation is inadequate. I understand this is a low tier Lexus product, but German competitors are beginning to equip acoustic glass on their low tier cars (the C-Class I drove yesterday had it optioned).

>> Powertrain: I save this for the last since my biggest curiosity before this test drive was whether the T24A-FTS+UA80 combination is a worthy successor to the 2GR-FE+U660(6AT) from 2006 to 2015 and 2GR-FKS+U880(8AT) from 2015 onwards. Let me start with the conclusion: it's not and actually a notable downgrade. Since I've owned multiple electrified vehicles before, I tend to judge pure ICEVs very harshly, but here's what I felt from 15 minutes of driving in mixed road and traffic conditions. The test drive car is a loaner with 3900mi so it's already broken-in.

Immediately I noticed the jerkiness of the start-stop system, which is expected for a non-hybrid ICEV. Having a hybrid assist motor really helps here. Getting on the roads and slowly accelerating, I noticed rough gear shifts from 1st to 2nd and 2nd to 3rd. This is something I've never experienced on any of the older V6 powertrains which were always smooth. I just don't understand how a modern luxury car maker can't get smooth gear shifts when they already figured that out 15 years ago.

Then heavy throttle application test and it was a mess. The transmission doesn't understand what I want (mode is Normal) and hesitates a lot before downshifting and requesting boost. Nothing happens until a sudden surge of torque hits and the car jumps forward. I tried two more times, once in Sport, same thing. Now I understand frustrations with the V35A-FTS+AWR10 powertrain on the LS500 by some forum members. And no surprise in media tests it's so much slower than competitors with similar power-to-weight ratio.

This is simply a very poorly calibrated powertrain. The transmission and engine don't work in harmony. The engine has a LOT of torque. Once it gets going it's much punchier than the V6. But getting there is the hard part (I think the same can be said about the V35). At the same time, engine vibrations are poorly filtered and you can feel most of it in the cabin. This is far from V6 level of refinement. And it's surprising since the 8AR-FTS in longitudinal applications (IS/GS300) felt no different from the V6, so they can build a smooth I4 turbo powertrain before.

Keep in mind I'm (very) biased towards electrified cars so my definition of responsiveness and smoothness is very different from a typical ICEV owner. But I also had the old V6s as the benchmark so I think I'm making fair judgement here. RX owners would be quite disappointed with this downgrade.

>> Extra: later in the afternoon I got lucky and tested the very rare RAV4 PHV (Prime) to get a feel of the NX450h+ if I preorder one (wait time is 6-9 months in my area). I have nothing but praise for it. Get one if you can. If the 500h system can deliver just 15% performance advantage over the 450h+ I would be very satisfied, so for now I will wait for the RX500h FSP and potentially a NX500h FSP.

The Lexus dealer asked ~USD63k for a fully loaded NX450h+ and I actually think it's a decent deal if you can get subsidies that are about to expire. The Toyota dealer asked ~USD53k for a fully loaded RAV4 PHV XSE. The NX is definitely worth more than $10k over the RAV4 so that's why I say it's priced fairly. Maybe after subsidies go away MSRP can go down but MSRP is basically meaningless at this point. A mid-60k NX is simply a result of current economic environment and it should be the new norm even after chip shortages go away.
Click to expand...

Incredibly insightful. I really wonder what's the reason for the erratic engine/transmission behavior this time around. I'm largely in the dark regarding current toyota powertrains but how recent is T24A/UA80? I would throw it up to teething issues for engine/transmission throttle programming considering the transmission confusion sounds rather similar to what I've heard of the Honda 10AT in some reviews, but I really wouldn't know.
K

I hope it will be a little bigger. 4,7m would be perfect
L

The waiting list for this car is tremendous, ordering now a NX450h+ here in Portugal you should receive it by December 2023 or January 2024.

Will1991 said:
The waiting list for this car is tremendous, ordering now a NX450h+ here in Portugal you should receive it by December 2023 or January 2024.
Click to expand...

Same in Australia. Hybrid and PHEV NX models have 12-18 month waiting times. The petrol models are a bit shorter at 6-9 months.

Will1991 said:
The waiting list for this car is tremendous, ordering now a NX450h+ here in Portugal you should receive it by December 2023 or January 2024.
Click to expand...

I'm told even the Luxury editions are in short supply because of the chip shortage. A corporate source shared with me that in a recent regional allocation 6 Luxury models were allocated across 14 dealerships.

In February I naively turned down a Luxury model because it didn't have ML. Six months later we settled for a non-Luxury model with greatly reduced options because our 12-month extension to our lease was expiring.
Last edited: Sep 19, 2022
N

Top shelf products seem to be the worst in stock. 250s, 350s are a bakers dozen. The other issue is gone are the days were NXs could be had for double digit discounts. 5% off MSRP no ADMs in any form are the MY22 year end special at a local dealership at the beginning of Sep, and now they have none.

Hmm, spent some time in a 350, seemed to be a base spec. To be honest I was trying to figure out why this one didn't resonate with me as much as something like RZ did. Wonder if the size and/or layout just didn't feel as refined to me as the aforementioned vehicle. Oor, could just be that the base spec itself is missing alot of the refinements that would otherwise have me liking the vehicle. Weird 😅

This traditional-style hybrid is less expensive than a plug-in but also less desirable.

IMO an "old-school" hybrid is more desirable than a "non-plugged" plug-in hybrid.
S

Agreed. But -- especially for editors at C/D and Motor Trend -- a plug-in hybrid or full BEV is easier to (learn to) drive than an old-school (Toyota) hybrid.

You cannot drive a Toyota / Lexus hybrid vehicle with a heavy hand or heavy foot, jerky driving style (which I suspect the editors at these automags tend to have) -- if you are smooth and gentle on the throttle (pulse and glide), the hybrid vehicle can do wonders. (I have learned how to maintain my Camry Hybrid on EV mode for quite a distance.) And I suspect that these automag writers, not being fans of CVTs, all want to prove that the Toyota hybrid's eCVT is just as loud and droning as any (and the rough A25 engine will gladly oblige at higher revs).
S

It's almost like people who do free joyrides for a living don't understand price is part of desirability.

"The 2.0L inline-4 X3 30i is less desirable than a X3 M" well thank you for the advice who would have thought of that? 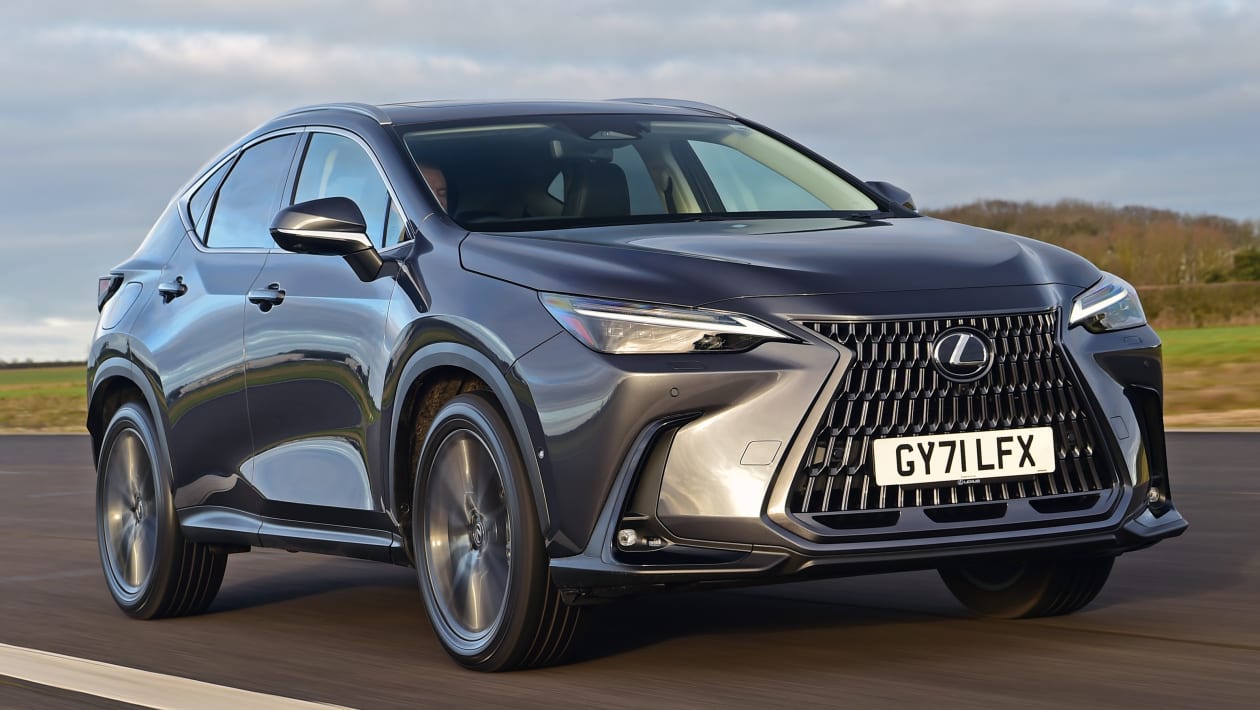 Efficient, comfortable and featuring impressive on-board technology, the Lexus NX is a premium SUV that competes with the class best

Four out of five stars.
S

The credibility of the reviewer automatically goes to zero when they say "CVT automatic transmission".

They should stop sending review samples to journalists who say "Toyota/Lexus hybrid is CVT".