A camouflaged Lexus sedan — most likely the next-generation IS — has been spotted in California (click for a larger image):

With camouflage identical to previously disguised Lexus prototypes, this mystery sedan is well hidden under its black vinyl wrap, but the general size and shape suggest the IS.

Beyond the wheels and the dual exhausts, the only other visible detail is the flash of an L-shaped LED taillight: 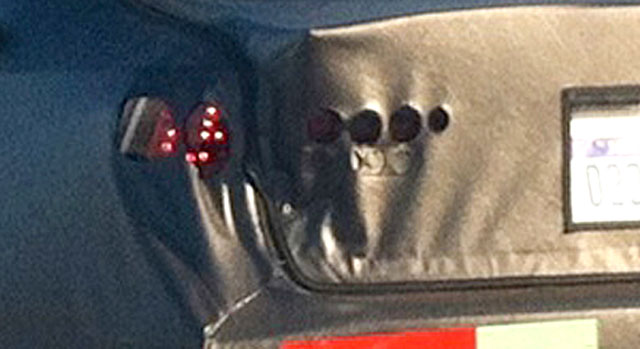 The final consideration is the timing of this prototype showing up in California — the last three models seen in similar camouflage were the GS, ES, & LS, and all were spotted within two months of their official reveal.

If this is indeed the new IS, there would be more than four months between now and its rumored January debut at the Detroit Auto Show — this could mean that the IS simply needs more time for pre-production testing, OR the plan is for an earlier reveal.

Let’s open it up — can you spot any other details in this mystery sedan photo?

READY!
Looks like it could be the new IS due to: - Tires, aren't those the same tires on the AWD model? - The side mirror base. - The "L" shaped LED tail lights. BUT, the emblem indentation on top of the license plate looks like a Nissan badge??

Can't wait to see this lil beast!! I found that the mirrors are big as they are on the current IS line. Also the seemingly tall back end and the flares up front on the fenders are similar to the current car.
No way thats a nissan it has Lexus written all over it! i hope its so much better than the old one.

Because the "old" one suck's so much? No, it doesnt!

Why everyone kept insisting the unveil will be at Detroit? The timing seems perfect for the LA auto show...

The Detroit debut was suggested by a Lexus executive in Australia, seems pretty reliable info: http://lexusenthusiast.com/2012/08/02/next-generation-lexus-is-to-debut-at-detroit-auto-show/

If you pay attention to door trims, they look very similar to current 2IS though...   I have a feeling Lexus will refine the current IS even more and the 3IS will not be an all new model. Similar to what they did with the LS.

I highly doubt it.. The current IS has been running since 2005 which is almost 8 years!
One of the photos of the black ISC-mule showed it to have a rear-suspension derived from the new GS,so this is indeed a new car based on the new GS,not just a facelift.

Its dissapointing there is no hunkered down wide ass look that i was hoping for. Hope this picture is AWD, because its quite high riding despite being an obvious sport model. It does look evolution not revolution. And surely they cant offer the 2.5 Liter V6 as is.

I have to think this is an AWD model with that wheel gap -- I also wouldn't take too much from this image with so much padding deforming the shape.

Paris reveal? Remember the comment of a certain Lexus exec.....

As far as I know, the IS won't be revealed in Paris.

It looks to be similar dimensions to the current IS.  The shape particularly the window lines look pretty much the same but comparing with a similar picture of my old IS I think possibly the shoulder line of the car is more squared off or flatter than the more elegantly upswept lines of the present version - this could all be in the padding though!   Possibly (Hopefully) the boot (eh Trunk) will be bigger because of it. Mirrors look to be the new GS ones.     Rear bumpers look less curved round probably adopting the latest lexus trend for squareerrer corners..  Sure they'll have a spindle grille and Expect there'll be all new interior but gains in space inside will be modest - probably just a redesigned back seat area... But maybe they'll do a tourer for those who want usefully more space....they've got to give more options this time round..
Dotty-LED tail lights?! That's not how Lexus is making them. Audi used to have dotty stupid tail lights and thats ugly.

I don't know, I like the idea -- think it looks cool.
I agree Krew !   The IS is sporty so the "L" swirl might be replaced for a multiple display of few different types of lights......I think the sneak view is just a tease of what we will see. Don't under estimate LEXUS.....it will be nice !  This is a volume car and remember LEXUS is stepping up to the plate more aggressively now more than ever to recapture the crown it held for 11 years....this is a vital player to reach those numbers just as the RX and ES play such a huge role in volume numbers.
the angle of the taillights on the side seem to be sloping down rather than up like the rest of the family. suggests that the below mock up may have some truth to it http://cdn.thelexusenthusiast.com/images/weblog/11-11-22-2013-lexus-is-sedan.jpg
That's what I was thinking. When I first saw those last year, I derided them for looking so similar to the current model and being lazy PSes. It was only when I saw the new IS grille and partial fascia earlier this year, the render suddenly had some validity to it. Looking at it now, I say we might be looking at an 85% similar render of the next IS. For that to show up in 2011, someone obviously in Japan has access to insider information at Lexus.  Considering that the design was frozen over a year ago and those conveniently showed up out of nowhere back then, it is very likely that the author has seen the XE30 unexposed as well. Also, IS prototypes(NOT mules) were very likely testing in non-FEP form back in Japan several months ago(if not last year) as there is absolutely no way that Lexus tests cars only a few months before introduction. There is probably a very tight embargo on automotive spy pics in Japan or the locals are too lazy, which is why we never see anything for months until towards the very end of development.

It looks like James was right again when he said that XE30 prototypes were already testing around Torrance 2-3 weeks ago. From here on out, we should listen to everything he has to say to the letter, as it seems his info is 100% correct each time. The LS facelift had been fully seen in person by him by mid-March, plus other info.
Someone should pull off that black cover and reveal this beast, although it does look like the GS, i don't like the dotted tail lights either.... come on lexus hurry up and release a new IS !!
I like how the new ES turned out. This one is a mini GS. I disappointed. The belt line looks lower and the car looks old fashion.

You like the new ES better than the new GS? haha
I believe the majority will say so.
The Es has a better curvy shape, the GS is too square and plain. Enthusiasts would understand.

Maybe other parts of the car but the front looks like a Scion tC - a yawner.
We should do a poll between GS and ES......
Driving the NX 450h+