Automotive News is reporting that a production model based on the Lexus LF-LC concept is currently on track for development:

Company executives said in January that the flashy 2+2 sports coupe was not planned for production. But several Lexus insiders now say the overwhelming reaction means it almost certainly will come to market.

Dealers could see the coupe in their showrooms within three years.

It also would be targeted further upscale, against the Porsche 911 Turbo and Aston Martin Vantage, both of which tickle the $120,000 mark.

Toyota can take up to 36 months to take a prototype to Job 1. Much depends on whether the new vehicle is derived from an existing chassis and component set. If Lexus uses the IS-F sedan platform, it could shave months off the development time.

While any talk of timelines or platforms is purely speculative, there is solid evidence of a possible production LF-LC — check out the GS sales target inscribed on this laser-cut etching sent to dealerships: 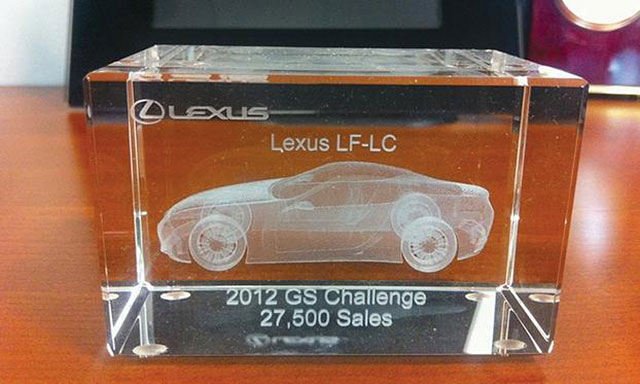 It’s unclear whether this laser sculpture was sent to dealerships globally or just in the USA — with 11,000 sales so far this year and 2,195 sales per month on average since the new model was introduced, 27,500 GS sales in 2012 might be a stretch for the U.S. market, but would be possible if worldwide sales are included.

The Automotive News article does include some positive news regardless:

…the Lexus source said the LF-LC probably would be produced even if dealers don’t hit the GS sales target.

wooooow that's what i am just say it in the previous article ))
My check book is ready...
WOOOOOOOOOOOOOOOOOT!!!
Fantastic! I just hope the style isn't watered down too much for production. Though I thought the LF-LC was aimed at the SL and 6 series coupe..
Remember thos mystery lfa's on the ring? They were testers for sure, i bet Lexus is already hard at work developing the lf-lc

I thought this Lexus (LF-LC) is a slot below the LFA? why would they use the LFA to test a "cheaper" model?
Drivetrain for example
Absolutely untrue. The Lexus LFA being testing around the ring with a new video just came out 2 days ago of both Lexus LFA AD-A and AD-B both lapping at the same time are two LFA prototypes either for racing or future production of LFA 2 or a special edition LFA. No way it has anything to do with the LF-LC since the video clearly shows both cars have the same LFA V10 as the sound is clearly audible.
LFA engine costs $157,000 according to Lexus. No way is that engine going to make its way into a car that costs $120,000 or so.

The development of the LfLC will likely be part of the joint venture with BMW.  Three more years of development - I truly hope its worth the wait.
I expect to see a production-ready model at the 2015 Detroit IAS...... MAKE IT SO! BD
25k is what the GS should hit, and that's probably what Lexus really wants dealers to surpass..... BD
if the dealers here in norcal would budge on the price of the GS a bit more then it would look more attractive...

It already costs less then the 535i and E350 What else do you want? BD

I just wish Lexus would get on with things, take too long to get with the market. The interior for example of the RX is so last decade it's scary. The LS is behind the times the list goes on, and yet they make some of the best cars on the planet! The new IS is a winner but should have had the turbo motor available from launch, the CT must get the turbo motor, it is almost as though Lexus have an internal war going on and their customers are the losers.
Driving the NX 450h+