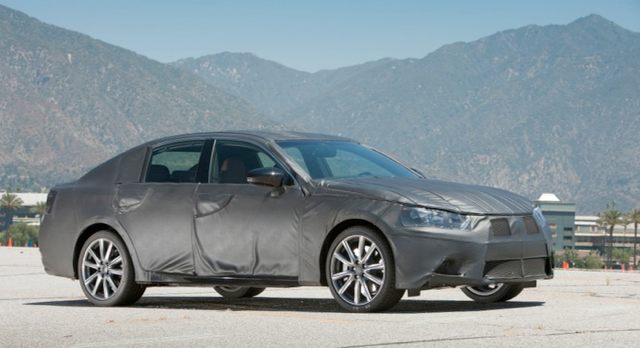 Confirming last week’s rumors, Lexus has announced that the 2012 next-generation GS will be revealed in August at the Pebble Beach Concours d’Elegance. Scheduled for Thursday, August 18th at 4:15pm PDT, the fourth-generation Lexus sports sedan will debut as a GS 350, meaning that the 3.5L 2GR-FSE V6 from the current generation will be carried over.

However, the even bigger news is what accompanied this announcement — driving tests of the camouflaged Lexus GS we saw last month. Here’s a list of the reviews so far:

I’ll be going through each review scouring for details and will post each one separately, but wanted to share all the links first. Plenty more to come!

Bring it on!!!!
Why isn't it a 370?  They need to keep up with Nissan/Infiniti they all have been bumped up.

i think the NG 3.5 engine will boost around 325hp natural aspired one and 400 for the hybrid one
According to Inside Line ... the 3.5-liter engine is carry over but with refinement , so expected higher power than the current GS350 . While I'm very happy to see GS460 is replaced by the GSh (might be called GS400h or GS450h or even GS460h ... which I don't know yet) because I doesn't wanted GS to go more displacement ... I hope Lexus would have 3.5-liter V6 with Turbo or Super Charger for the GS F .