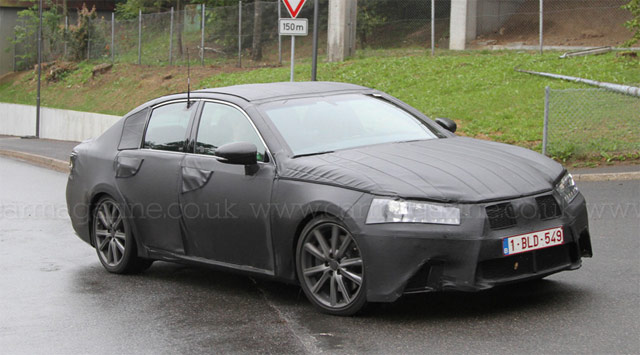 Auto Guide is reporting that the next-generation Lexus GS will be making its debut at the Pebble Beach Concours d’Elegance on Sunday, August 21st:

Infiniti won’t be the only Japanese luxury brand with something to unveil at this year’s Pebble Beach Concours d’Elegance. Our source inside Toyota let slip that the all-new, fourth generation Lexus GS luxury sedan will break cover at the world’s most prestigious historic car show.

When asked for confirmation, Lexus Communications Manager Ming-Jou Chen was coy in her response. “We haven’t made any announcements… but it wouldn’t be a bad idea to keep an eye out during Pebble Beach.”

That makes it 37 days until the production GS debuts, just four months after the LF-Gh was displayed at the New York auto show. Auto Guide also suggests that the hybrid GS will be the model on display at Pebble Beach.

Doesn't expect the Lexus GS can be unveiled in such a short time !

This one better sell more.. The current sales numbers of the GS are a joke Its sad because the current GS is an absolutely beautiful, elegant, comfortable and luxurious car.. It's the oldest in it's segment but it looks the best..

sale numbers are only half of the story. The current GS is an wonderful car and I would def buy one if i had the means and needed a car of its type.
Yeah true, it really is a good car considering how old it is.. It looks much better then both 5 series and E-class

*** fix 1994-97 LS400**
Next to the LFA and the LS the GS is one of the most anticipated new generation releases in a while----I am anxious and optimistic that this will most likely be a break through for Lexus for what the future holds---I am also looking forward to the next generation LS in the next year or so----i hope it breaks all boundries for Lexus and blows BMW, MB and Audi in the dust.  I hope that they have a few world firsts up their sleeves as they usually do----Good luck Lexus !
From the shrouded model in the above images it looks like the "gaping maw" grille has been toned down a bit from the shocking prototype -- I hope and pray this is the case.  After reading official comments that engine air intake is most efficient from the bottom, I had believed the traditional chrome grille portion "above the bumper" was set to go away (see LFA).  I guess we'll see soon enough.  The current gen has given me a lot of faith in the Lexus designers.
Yeah, looking forward to it...
Lexus will rock its place @ pebble beach. just like they did with the LF-A. i wonder if down the road they would ever make another line up of pebble beach editions...