END_OF_DOCUMENT_TOKEN_TO_BE_REPLACED " /> Massive Lexus Die-Cast Model Collection | Lexus Enthusiast
Menu
Log in
Register
You are using an out of date browser. It may not display this or other websites correctly.
You should upgrade or use an alternative browser. 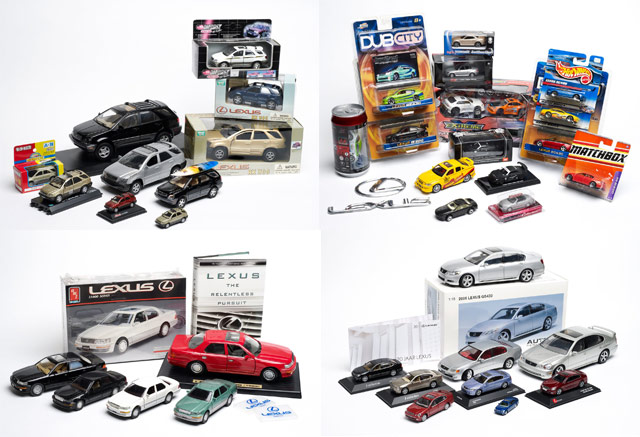 Today, I would like to share a very special article from Eric Janssen, a retired Sales & PR Manager from Lexus Belgium, who has been collecting Lexus models since the very introduction of the brand, and was gracious enough to share a full history and photos of his collection.

The history of Lexus scale models is a short, rich and fascinating story, and over the years, we at Lexus Belgium were able to discover about 170 scale models spread over 25 manufacturers.

The story starts in 1989 with the opening of the first Lexus showrooms in the USA. Refined aerodynamics, superb driving qualities, and a remarkable silence characterize the first LS400, and 75,000 cars will find their way to the customer. On the model front, we see an excellent plastic kit from Tamiya (1:24), several diecast models thanks to Diapet (Yonezawa Toys), Majorette, Road Champions and Road Tough, with scales ranging from 1:40 up to 1:18. One Swiss Kit builder (ME-Mod) releases a resin kit at the 1:43 scale, which was very popular in Europe. 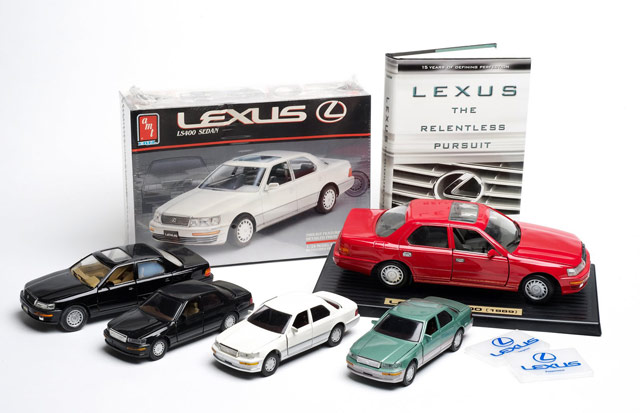 Corgi Toys and J-Collection both release models of the LS430 in 2000. 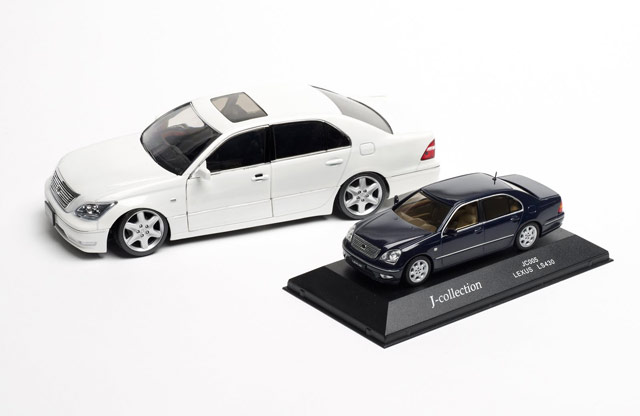 For the LS 460, Lexus Europe placed an order with the French manufacturer Norev for a 1:18 model, which is available in a white body colour through dealers. Silver and black versions are available in the model car shops. Provence Miniatures also produces a nice black built 1:43 LS460 resin limited edition on behalf of Norev. The LS600h will be available early next year, thanks to the Japanese manufacturer J-Collection (1:43). 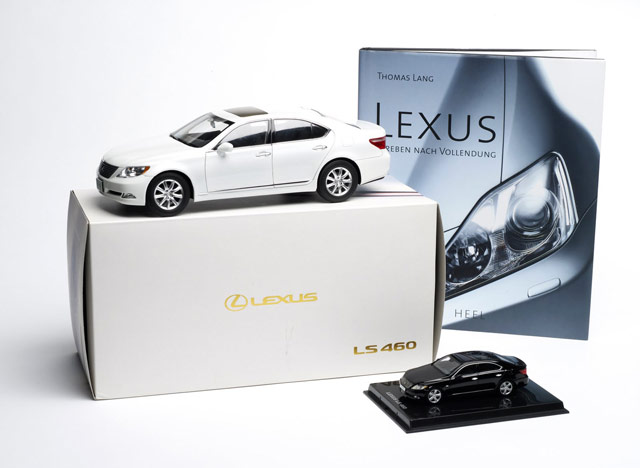 In the eyes of the model car manufacturers, the first generation of the GS did not get much interest, with the exception of the Japanese Aristo 1:24 scale plastic kit by Ayoshima. 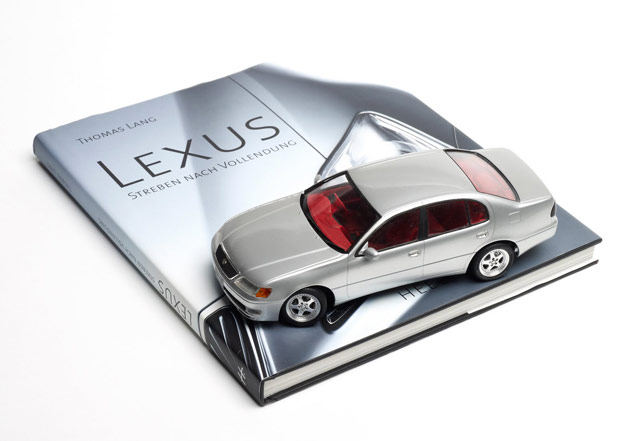 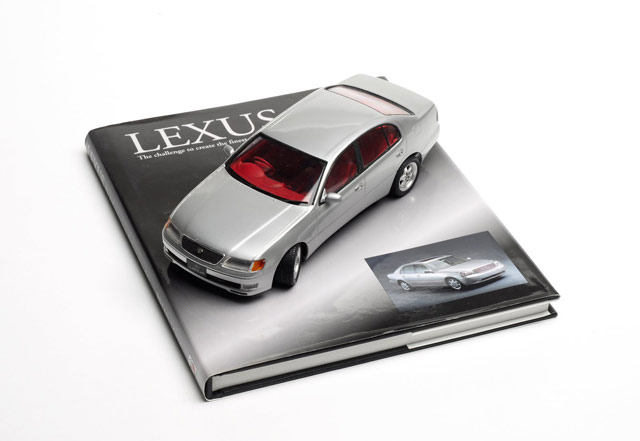 There was much more interest with the next generation, with an excellent 1998 1:18 replica GS300/430 by Auto Art and a cheap but qualitative smaller 1:43 are produced by Schuco/Cararama. Under the Japanese label J-Collection, we find the rest of the GS story — from the GS 300/430 to GS 300/460 and then the GS 450h. The newest GS generation is also available from Auto Art (1:18 scale) in various colours. 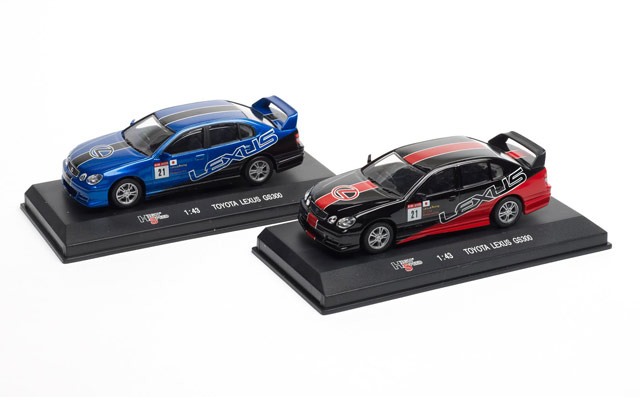 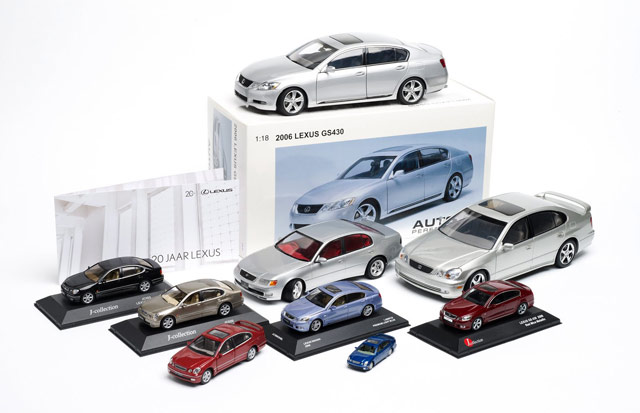 Auto Art also offered four different body colours (black/blue/silver metallic and yellow) when the IS was introduced in 1998. Additionally, a RHD 1:43 scale IS 200 was made by Corgi Toys, and M-Tech (1:43) and Auto Art (1:18) tackled the Japanese Altezza. 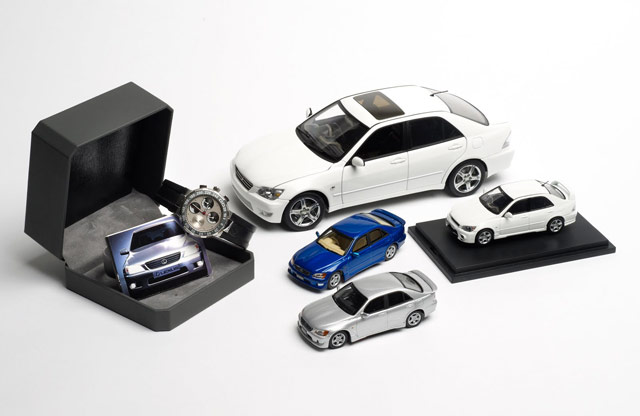 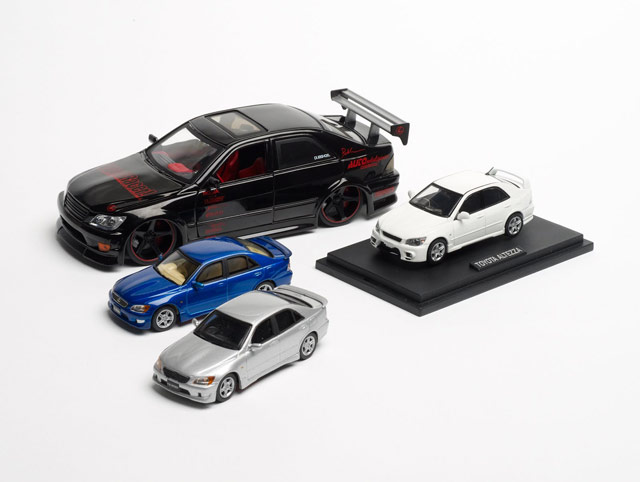 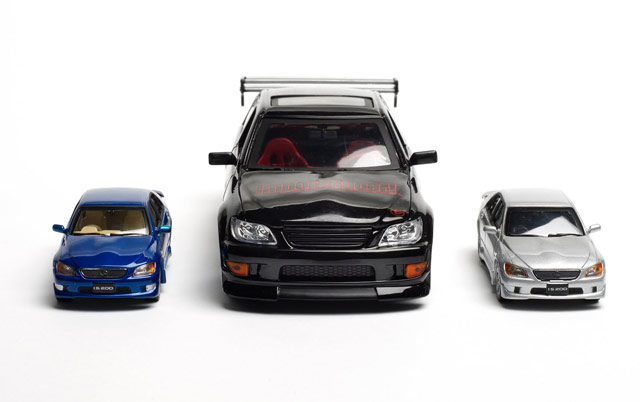 The second generation IS can be found in the catalogues of Auto Art (1:18), Bburago (1:24), and was also available as a radio-controlled car from the Japanese Masudaya. At the top of the bill is the IS-F was offered as an affordable J-Collection die-cast version (available in silver or blue metallic) and the more expensive, higher quality model from HPI-racing. There is also a black IS-F available through the Lexus dealers and a racing version (without race numbers and/or decoration) in Japan. Kyosho produced a very limited 1:43 scale edition of the black “Nürburgring Test Car”. 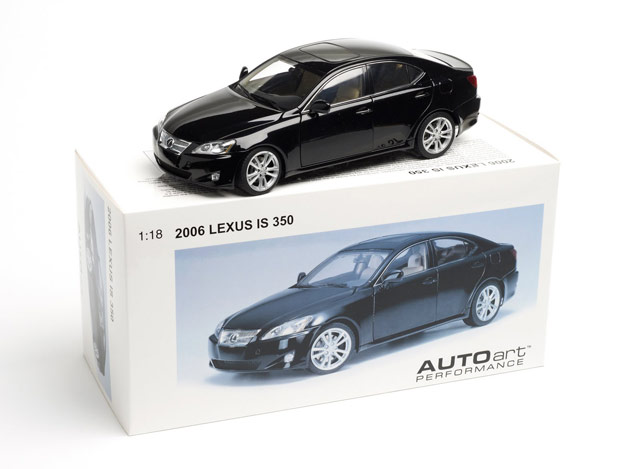 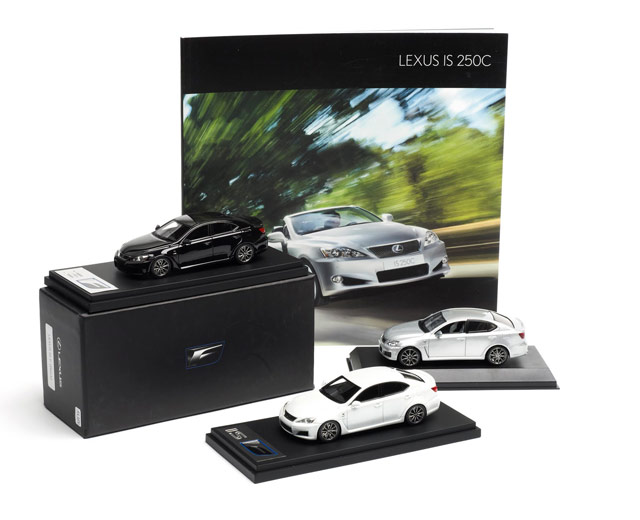 Minichamps is more or less the official supplier of all Toyota scale models, but have only produced one Lexus, the SC 430, which was released with the roof both up & down. Other colour versions would follow through the usual sales channels, as the SC430 would become a very popular car on the model car scene, thanks to several manufacturers such as Maisto, Welly, & Yatming. Happy Well also released an SC 430 with a battery-powered roof. 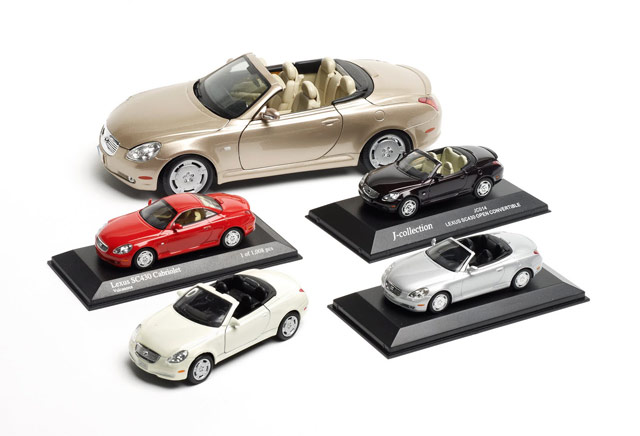 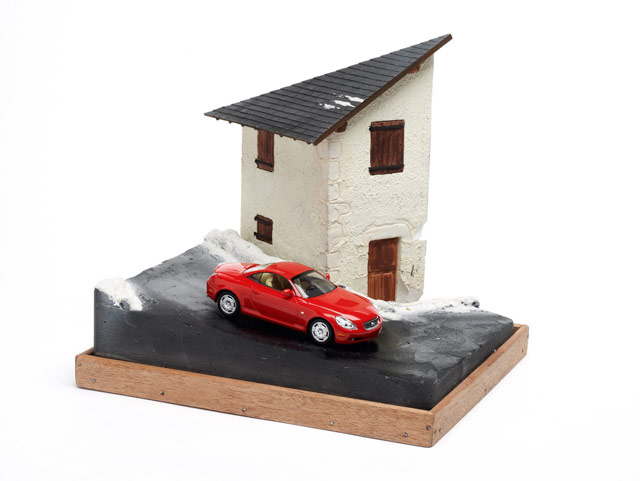 The first generation SC was released in Japan as the Toyota Soarer, and both J-Collection & Me-Mod released scale models, and only one SC400 was released by Me-Mod. Me-Mod also released the only ES 300 model. 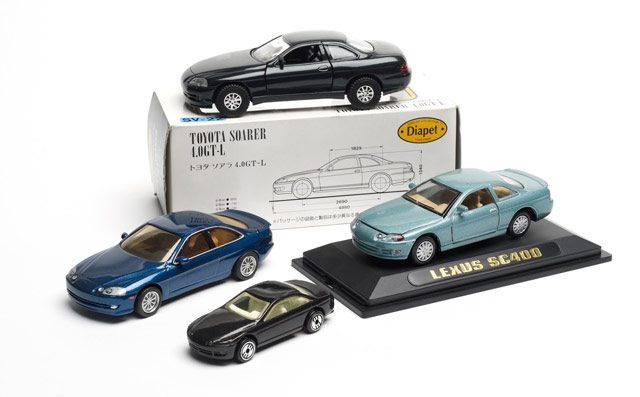 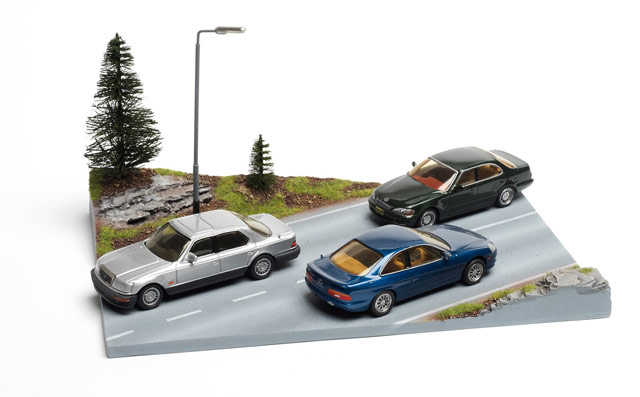 The most popular Lexus ever is probably the first-generation RX 300, which was built on all possible scales from 1:87 to 1:18. In alphabetic order, there was Auto Art, Cararama, Kinsmart, Schuco, Smart Toys and Dickie Toys. 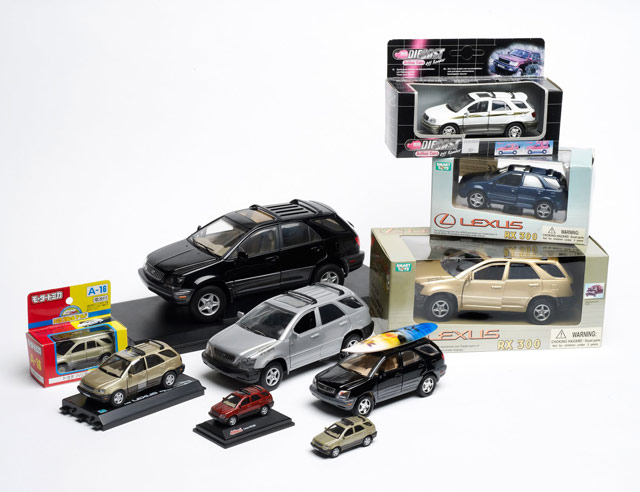 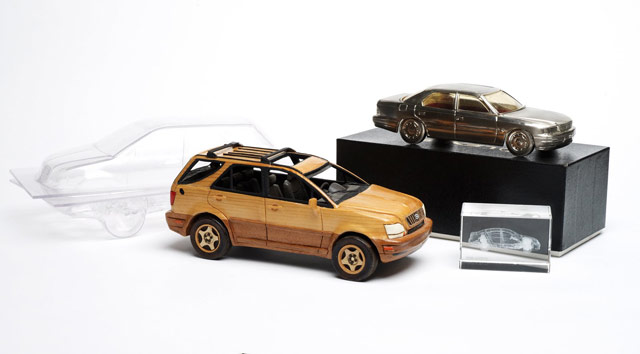 To all collectors surprise, no scale model was released for the second generation RX until the arrival of the RX400h, and both hybrid & gas versions were released by J-Collection. No sign of the RX450h for the immediate future. 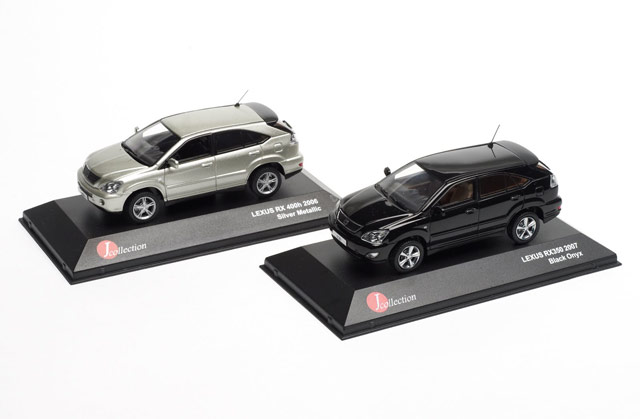 There’s no solid information about the ultimate Lexus, the LFA, but rumours suggest die-cast models from Wits or Yow Modellini, both Japanese manufacturers. Apparently, the Wits model has been reserved for the LF-A customers. Currently available in Europe are two versions of the LFA racing car that participated in the 24 Hours of the Nürburgring in 2009, which were made by Minichamps and currently sold out. Ebbro did announce both LF-A (Nürburgring 24 Hours 2010) racing versions and a white Shakedown car. All of them on 1:43. 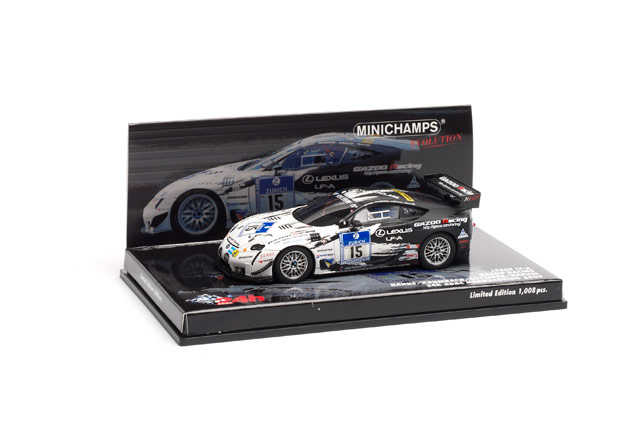 Steven Spielberg is a Lexus enthusiast, and for his film Minority Report (starring Tom Cruise), a dark red futuristic sportscar of the future (2054) was been built, and was also released as a collector’s item Maisto 1:24 scale model in a promotional gift box from DreamWorks Pictures and 20th Century Fox. 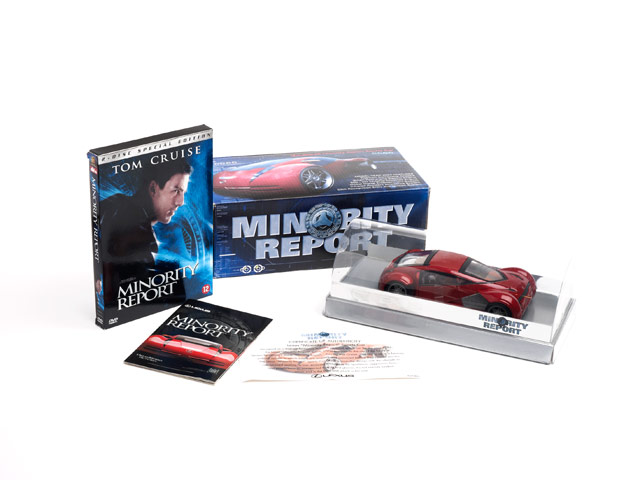 With Lexus playing an active role on the Japanese racing scene, there have been several models from 1998 onwards. First up is the Japanese Touring Car Championship and the Altezza, which was recreated several times by M-tech and Ebbro. Lexus also runs two cars in the GT300 category of the Japanese GT Championship, and there’s some nice-looking GreenTech and Wedssport versions of those cars. 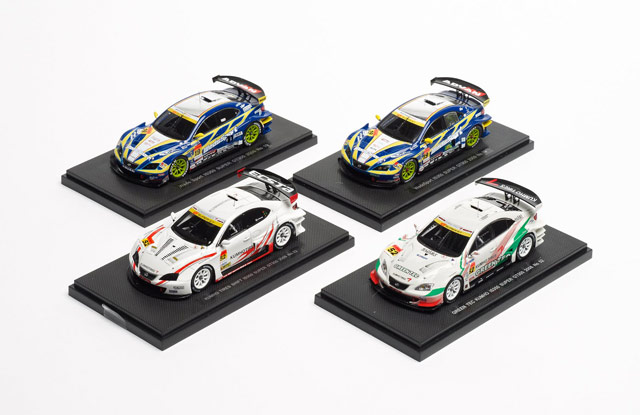 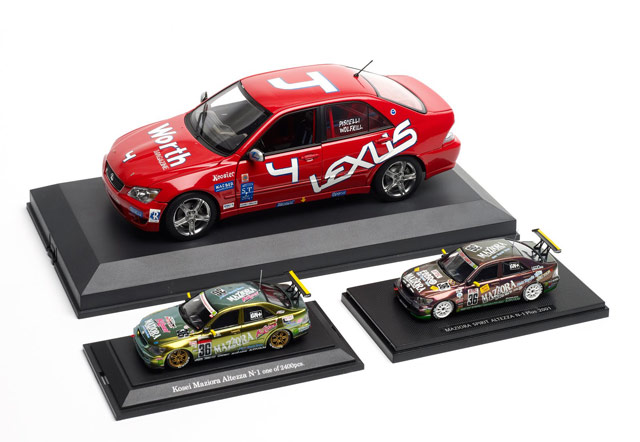 24 different versions for the SC430 with sponsoring of Mobil, Zent, Denso, Petronas, Eneos, Eclipse and the inevitable black test car. On a bigger scale (1:24) the Tamiya versions, either built or as a plastic kit, and the nice-looking Auto Art Replicas. 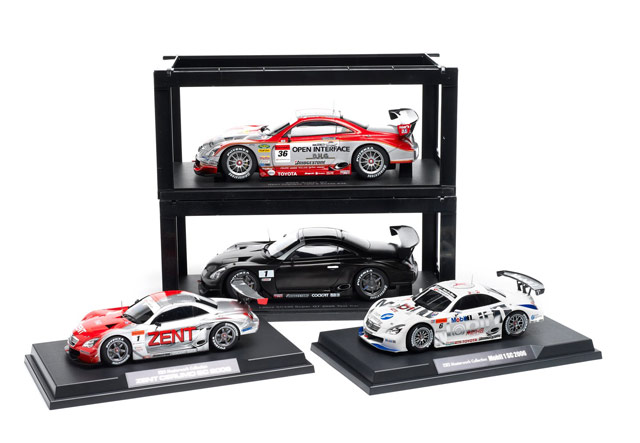 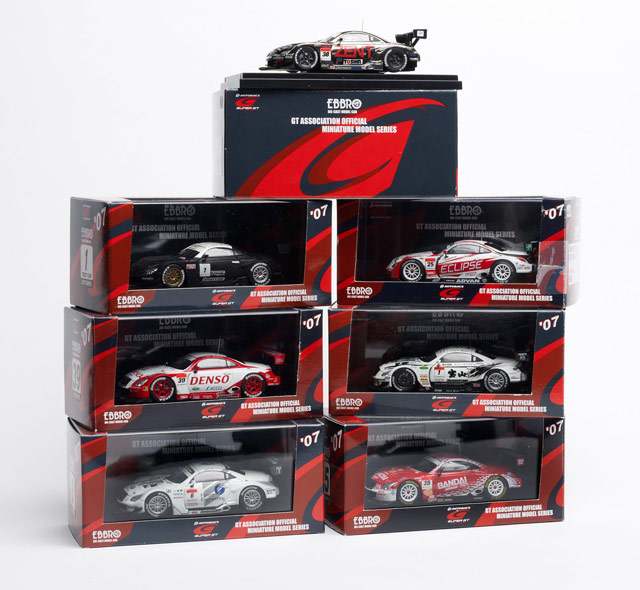 Lexus also built a strong reputation in the USA as engine supplier in the Grand Am championship, with several victories and titles thanks to the Chip Ganassi Team. The French kit maker Provence Moulage released three resin kits (1:43), which are nearly sold out. The good news comes from Spark Model, announcing several versions for the next coming months. 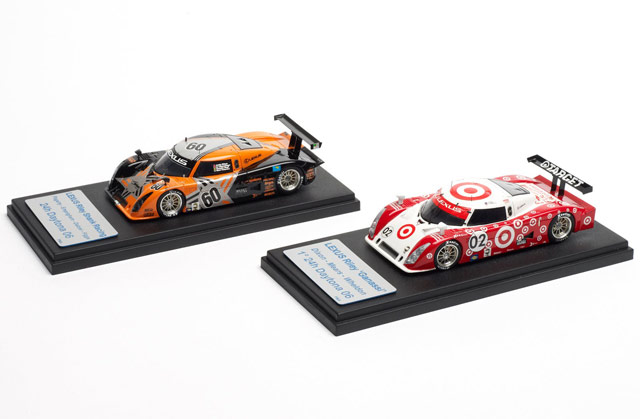 Here’s high-resolution version of the collection:

WOW!
Great to hear from Eric again and see some of his collection. We used to talk models at shows and meetings before he retired. I started the Toyoddity blog meaning to put up pics of my own collection, but got side tracked. Scott
Where can I pick up the 3rd Gen GS???????8-)
dissappointed that there were never any good models of the first-gen SC. :`-(
oh yeah... there used to die-cast first-generation RX all over the place! I had one, but I had a little too much fun with it. :`-(
Whoa. Mr. Janssen is definitely a Lexus enthusiast.
Would love to pick up a couple of the models myself... The IS Series, LS 400 onwards, GS 2nd generation onwards, .....
WOW. And I thought I spent too much on diecast models!! Nice to see someone else's diecast collection. I have several of the models he has (mostly the ones priced less than $50.00 per car) I and I think a few random others that I couldn't find in those photos.
Very nice collection. Too bad there's no lexus LFA in the market :-/

Scott Brownlee wrote:Great to hear from Eric again and see some of his collection. We used to talk models at shows and meetings before he retired. I started the Toyoddity blog meaning to put up pics of my own collection, but got side tracked. Scott

I thought you would probably know each other -- I'd certainly like to see some of your collection!
I have a lot of Die-Cast collection but barely bought a Lexus ... =.=
GS400 Die-Cast FTW !
Please help me find a lexus IS250c or IS350c diecast model.. I've searched everywhere... If anyone can find it's you guys... Many thanks and kind regards, Rob Jibup81@hotmail.com