END_OF_DOCUMENT_TOKEN_TO_BE_REPLACED " /> Akio Toyoda Profile | Lexus Enthusiast
Menu
Log in
Register
You are using an out of date browser. It may not display this or other websites correctly.
You should upgrade or use an alternative browser. 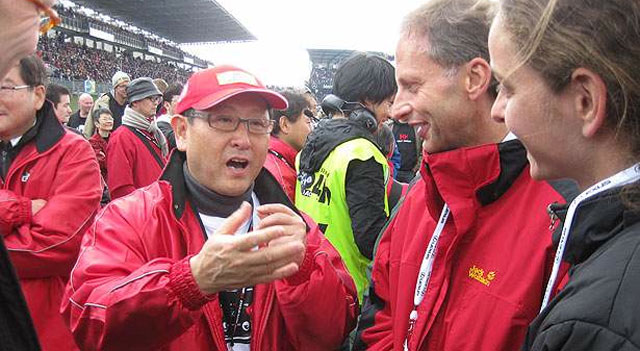 Admittedly, this is the third time in a row that I’ve linked to The Automotive News, but today’s profile on Toyota President Akio Toyoda is not to be missed — some choice quotes:

[…]Toyoda embarked on a quest to become one of the company’s top certified test drivers and its top car critic. That challenge and journey combined to forge Toyoda’s management priorities, ones that now are reshaping Toyota in a time of crisis.

By getting behind the wheel and scrutinizing product, the 54-year-old Toyoda believes he is living out the company’s guiding principle: “Genchi, Genbutsu” — Japanese for “go and see for yourself.”

“Growth in itself is not bad if you can cultivate the human resources to keep up,” Toyoda said. “But I don’t want to be the largest company in the world. I want to be the best.”

There’s something so refreshing about President Toyoda’s passion — it’s so clear in everything he does, and it’s that sincerity that makes me so excited about the future of both Toyota & Lexus.

Update: This article can be read on the Autoweek website, which has republished the Automotive News story. (Thanks jruhi4)

The entire article is actually available for free at Automotive News' sister site AutoWeek. here's the link: http://www.autoweek.com/article/20100601/CARNEWS/100609999
@jruhi4: Thanks, I've updated the post!
Hi. Pictures of Mr Toyoda at Tokyo Auto Salon here. (It isn't my page. I found it by google just now.) Hope you enjoy it. (^_^)b
@ano: I wonder what he's doing in each of those pictures!