Honda was never a big car maker in Japan. Even at the peak of Bubble Era their largest mainstream car sold there was the Accord and Prelude. Sure they also sold the Acura Legend in JDM but at the same time Toyota/Nissan sold over 10 big car models. Honda's strong suit is always Kei cars and subcompacts so naturally they are compared to Suzuki.

Honda USA and Acura are the most 'Americanized' Japanese brand and they almost operate completely independent from Honda Japan. Nowadays Honda USA has more influence on Honda's global product strategy.

It’s 2022 and 3 tried to race this past weekend lol. It looks identical to the Jetta. So odd to me
N 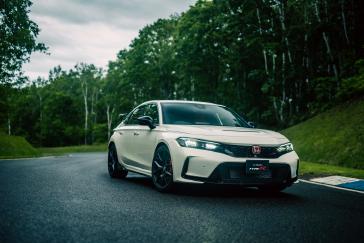 A global high-performance icon revered by driving enthusiasts around the world, the 2023 Honda Civic Type R was revealed this evening at a special event in Los Angeles with NTT INDYCAR SERIES superstar driver Colton Herta behind the wheel.

Honda has not released HP/Torque figures yet, but C&D has given us most of the other major stuff.

After teasing it ad nauseam, Honda has finally revealed the 2023 Honda Civic Type R. Well, mostly revealed it, anyway. We still don't know how much horsepower it has or what was done to its chassis, other than that bits have been "enhanced." What we do know is that the latest version of Honda's hottest hatchback is said to be more powerful than it has ever been. It also looks more mature, which was an easy bar to clear because its predecessor looked like something out of the Japanese anime series Gundam Wing. 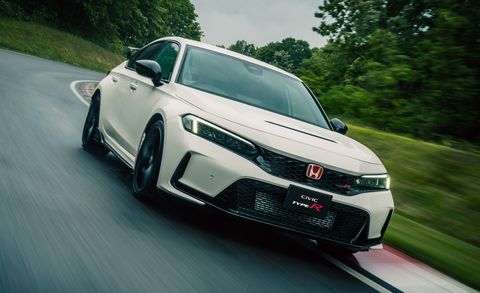 R-acy and R-estrained Appearance
It's no secret that the outgoing Civic Type R had love-it-or-hate-it styling. For better or worse, the new CTR doesn't elicit such strong reactions. However, we think it looks wonderful, with only a handful of racy add-ons that don't ruin the otherwise restrained design. Sure, there are still some fake vents for vanity's sake, but the ones behind the front wheels are now real. The rear spoiler remains a prominent feature, but it's no longer a boy-racer caricature.
VIEW PHOTOS 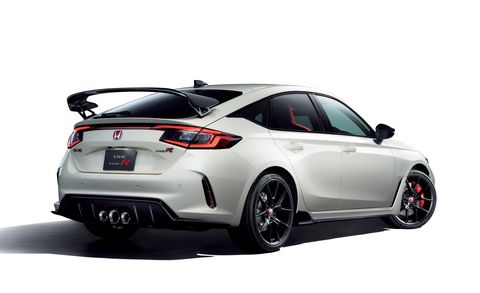 Like the outgoing version, the new Civic Type R has some unique bodywork. It’s still only offered as a hatchback—per tradition—and has flared fenders that distinguish it from lesser Civics. Honda also gives it wider rear doors that you won't find on the regular hatch. The side sills are another unique touch, and in the back is a black diffuser with the Type R's trademark triple-tip, center-exit exhaust.

Easily overlooked, but hugely important, is the R-rated Civic's new wheel-and-tire combination. The last one rode on 20-inch rims with 245/30 summer rubber that had pancake-thin sidewalls. Mercifully, a smaller set of lightweight 19-inch rollers with thicker sidewalls is now standard. Don't worry, though; Honda only downsizes the wheel diameter. The CTR's contact patch is now notably wider thanks to its new 265/30 Michelin Pilot Sport 4S summer tires.
Normally, the big news with an all-new Civic Type R would be its performance specs. Unfortunately, those are being kept under lock and key until Honda reveals them closer to the car's launch this fall. Luckily, we have some hard facts about what's under the hood to hold us over. Its to-be-determined power comes from a turbocharged 2.0-liter four-cylinder. Once again, the engine's partner in lap times is a six-speed manual transmission with a rev-match feature.
Honda says it'll be the "most powerful Type R ever." The U.S. version previously had 306 horsepower; those in the Europe and Japan markets had 316 horses. Is it safe to say the 2023 Civic Type R will have at least 317? The way Honda phrased it makes us think that could be the case, but corporate marketing is a fickle friend, so we'll just have to wait and see. That also goes for its suspension and steering. They're somehow improved. That's all we know for now.

Inside, the car’s Type R–specific front seats come in any color you want as long as it's bright red. We had the chance to sit in these new buckets and can report that they're super comfortable. The U.S.-spec model will also have red carpeting for the first time, a treatment that was previously only seen in other markets. As of right now, we're not sure whether Honda will offer a black carpet or not.
VIEW PHOTOS 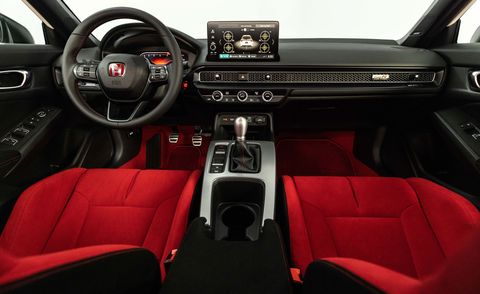 HONDA
The rest of the hot hatch's interior is what you'll find in the regular Civic hatchback's top trims. That means a 9.0-inch touchscreen infotainment system with wireless Apple CarPlay and Android Auto, automatic dual-zone climate control, and a fully digital gauge cluster. In the Type R, the latter displays a unique design in the +R drive model. It includes shift lights, gear position, and a race-car-inspired graphic for the tachometer.
Honda hasn't said how much the 2023 Civic Type R will cost, but it's expected to exceed the price of the 2021 model, which started at $38,910.
This content is imported from {embed-name}. You may be able to find the same content in another format, or you may be able to find more information, at their web site.

Who releases a performance halo model with no specs 🤣

Gecko said:
Who releases a performance halo model with no specs 🤣
Click to expand...

I had to look. Toyota drops full specs when the GR Corolla debuted. Honda has teased this thing with camo in Japan, camo here, and still no specs lol LONG BEACH, Calif. (March 31, 2022) – It’s official: The powerful, stylish and agile hot hatch U.S. drivers are looking for is on its way, the first ever 2023 GR Corolla. With the detail-obsessed TOYOTA GAZOO Racing team at the helm, and master driver Akio Toyoda, a.k.a. MORIZO, signing off on...

I'm sold already! It looks so damn good.. a white CTR with a red GR86 would be a perfect Japanese two car garage for me. And I love how nicely the widebody is incorporated into the design, unlike the previous gen with the tacky rear fenders.
N

What a time to be alive to have the Honda and Toyota both offer hot hatches!

The PR campaign is odd without HP/TQ numbers, but dang Honda's PR team is straight fire with their rollout plans. They straight up are making sure the Honda Type R is in the mind of each and every single person for more then a single news cycle. Good Job!

NXracer said:
What a time to be alive to have the Honda and Toyota both offer hot hatches!

The PR campaign is odd without HP/TQ numbers, but dang Honda's PR team is straight fire with their rollout plans. They straight up are making sure the Honda Type R is in the mind of each and every single person for more then a single news cycle. Good Job!
Click to expand...

It’s lame and the same pro Honda youtubers promoting something with no specs is hilarious. I guess tell us about backseat room lol. Just release the specs for crying out loud.


Gor134 said:
I'm sold already! It looks so damn good.. a white CTR with a red GR86 would be a perfect Japanese two car garage for me. And I love how nicely the widebody is incorporated into the design, unlike the previous gen with the tacky rear fenders.
Click to expand...

I liked the previous gen styling a ton. This one looks fine too. It looks exactly what’s been teased. Not sure what people expected.

Manual, but no manual parking brake, unlike the Subaru WRX and the Toyota GR Corolla.

Levi said:
Manual, but no manual parking brake, unlike the Subaru WRX and the Toyota GR Corolla.
Click to expand...