END_OF_DOCUMENT_TOKEN_TO_BE_REPLACED " /> Lexus will have “Nine Product Stories” in 2015 | Lexus Enthusiast
Menu
Log in
Register
You are using an out of date browser. It may not display this or other websites correctly.
You should upgrade or use an alternative browser. 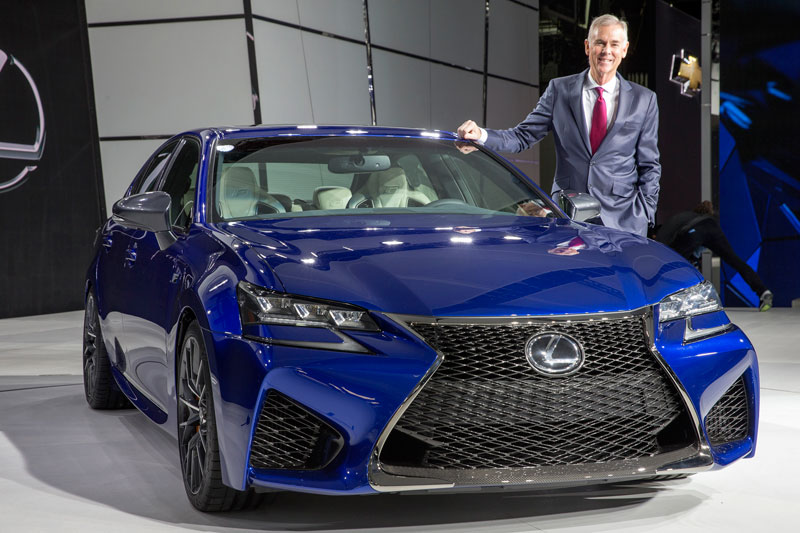 Lexus will have nine “product stories” in 2015 — here’s what Lexus USA general manager Jeff Bracken had to say in an interview yesterday at the Detroit Auto Show:

“In addition to the four new or mid-cycle product refreshes that I revealed at the show this morning, there will also be an all-new generation introduction later this year, a special edition later in the year like the Crafted Line, and we’re going to drop turbo engines into multiple vehicles.”

This makes for a busy year, and also leads into some fun speculation:

I in no way expect it,but I would love to see a BMW Z4-esque roadster in concept form.

I wanted that for the past 5 years! It's something Lexus could do and do well.
We'll have to keep our fingers crossed! :-)
Imagine a mini sc430 but F... something like a mini SC-F
I'd love that so much!

I know that we are all anxious for Lexus to replace the aging 2.5L V6 with the new 2.0L turbo engine but we keep forgetting about the 3.5L V6 because it's already very good on power. But compared to the 335i the IS350 is way down on both thrust and fuel efficiency. And it's also way down on power in comparison to the Supercharged 6 cylinder in the Audi S4, the 3.7L V6 in the Q50, the 3.0L Bi-Turbo V6 in the C400 and the 3.6L V6 in the ATS. This, in turn affects the larger and heavier RC 350 and the GS350 vs their competition as well. So while the IS350 may not need an update as urgently as the 2.5, I do think it's due for an upgrade soon. The interesting thing that grabbed my attention was Bracken's statement that they're going to "drop turbo engines into multiple vehicles." Now this may just be me looking too deep into this but the word "engines" was plural which could mean that they could also have a new turbo engine to replace the 3.5L V6 as well. Especially since the performance gap between the 2.0L Turbo and the existing 3.5 V6 won't be that great anymore and the fuel economy gains will be substantial, so there will be little to no reason to pay a premium to get the IS 350 It's still pretty impressive that this engine has stood up to the test of time after being put into cars back in 2005. Just shows how much ahead of the competition Lexus was with this V6 engine. Can't wait to see what they bring to the table with their next engine to replace their 3.5L V6. What do you guys think?

I think you're making some excellent points! :-) A turbo-replacement for the 3,5 V6 makes buckets of sense,and I think it could be happening soon.
They're falling behind and need to pick it up.
If you saw the Tacoma launch they added a 3.5 V6 with direct and port injection running the Atkinson cycle. We could see a similar update running VVt-iW
Great post Blane...I agree technically there is nothing bad about the 3.5 even though people call it old, its still quite relevant today. Surely a boosted unit will provide more power but the big ifs are long term reliability and of course MPG. Just think, the 3.0 TT 2JZ in the Supra from 1993 was a 3.0 unit twin turbo making 320hp. Now MPG is surely low but its amazing to think that TODAY some companies use the same setup with similar power. 22 years later! I do wonder from a marketing perspective what will the new engines be named. Will they keep the actual liter or use a larger number based on the boost (ala hybrids).
Not only that, the Supra's TT wasn't just ANY TT, it was an IN-HOUSE TOYOTA developed/engineered turbine. It is arguably the greatest TT ever made because it produced very little turbo lag for that time period. BMW/Merc's turbo's are made by other outside company's. The NX twin-scroll turbine was Lexus in-house as well, so I expect the 8AR-FTS to be great and superior to all. I'm not sure if the 3.5L V6 would get replaced any time soon, it does make sense that it's aged as well, but it's also the award winning engine, so I don't know. But mentioning the 2JZ got me thinking of performance and forced induction. Up until recent years Toyota was offering superchargers as TRD aftermarket parts. I always prefer high displacement NA V8's, but I kind of feel for the years to follow, with the F marque, supercharged V8s for the larger vehicles could help separate F from ///M and AMG.
Given that the 2.0L turbo on the NX makes only 235hp while Hyundai's makes 280hp, I'm thinking perhaps there would be a higher-boosted version that makes 280hp as well? Not quite enough to replace the 2GR-FSE but definitely good for the 2GR-FE. Lexus could even follow the modular-engine-block way like BMW does, and make a 6-cylinder version of the 2.0L, with 3.0L in displacement.
I'm not so sure. Despite it "only" having 235 hp, it still manages to get the 4000 pound NX to 60 mph in 6.9 seconds. Yet the 245 hp 2.0T engine in the Hyundai Sonata takes 8 seconds to get the 3500 pound sedan up to speed. So while the numbers may tell one story, how the engines actually perform in real life is a different story. If the NX is capable of doing 0-60 in 7 seconds pushing 4000+ pounds, I fully expect the same engine in the IS to be able to do 0-60 runs in the low 6's or high 5s if we are lucky, since it's about 500-600 pounds lighter, more aerodynamic, 0.28 drag coefficient vs 0.33 in the NX, and a faster shifting transmission in the 8 speed auto. They should be able to get the car to 60 in 6 seconds flat pretty easily. And hopefully over 32 mpg highway.
Lexus will expand the use of the turbo 2.0 into the IS, RC and even the GS. This will strictly be a rear wheel drive application. The AWD versions will get an all new 3.0 V6 normally aspirated. The ES will get a refresh followed by the GS. The new GS-F will add to the F stable. The final update will be the LX. The all new RX should arrive in late fall bigger and meaner than ever before.

4 or new mid-cycle product refresh. Let's think Probably a face lifted GS, so that's 1 The 4RX, 2 An IS getting the 2.0l so maybe as a refresh? But why so soon to refresh the IS? 3 And could there be a new LS showing up in the end of the year? Either the next gen LS or maybe a new concept of the LF-LC to keep the public updated on looks wise

The new LX is coming out by the end of 2015 early 2016
Where did you hear that? I'm very excited to see the next gen LX
Refresh but major body revision.

Maybe a CT200t? This almost certainly won't happen, but it would be nice if they paired the 2.0t with a manual trans.

That would be so sweet,but I agree that it's highly unlikely. The 2nd generation CT will almost certainly have more drive line options.
..and so it should!!

Hmm...I expect a GS-F+ with a TT in that v8!lol ok ok, I want to see a new LS already, that thing is like a dinosaur fossil. I wonder how reliable this turbo setup is, I would love to see that as an option in the GS, but if it's a 4cyl with a turbo then count me out.
I think the LX might be one of those refreshed models.

Exactly my thought. It's been around since MY 2008 so a 2016 would make sense as a new redesign. But my gut says Lexus will stretch it at least another year, possibly two. In short, the four I'm stating: 4RX, GS F, IS 200t, RC 200t.
I think the LX will receive another final facelift this year before the next gen is due in a couple of years or so. Previous gen LX also received two facelifts.
I hope there will be all new gen of LX not just the face lift.
I did read somewhere that there would be a new Land Cruiser in 2016. If it's a replacement for the 150-series (GX) or 200-series (LX) was not specified,but supposedly it would have hybrid technology.
It is probably a replacement for the 200-series since 150-series was just facelifted last year.
Yes,I think you're right.

I think a lot of people, including myself, forgot krews made timeline. I think this is actually what is going to happen
New RX, New LX , facelift GS and ES

Nobody really mentioned about the ES facelift probably in Q4 this year!
This is the most likely scenario in my opinion.

One other thing to note with new engines, remember the hybrids use the current N/A engines. Note the NX hybrid doesn't use the turbo engine. I wonder if the hybrids in the future will use these boosted engines or have their own stand alone N/A units.

You could view turbos and hybrids as power adders. They work differently in method so it is unlikely that Lexus would employ a turbo together with a hybrid setup. The CT200h is a fun little car to drive in Sport mode with a few caveats. Enthusiasts would welcome more power but if you want a turbo you would have a gas only setup. Using a 2.0 Turbo could add a lot of guts and eliminate some of the hybrid's performance limitations like when braking hard for a turn and the hybrid shuts down the gas engine. The IS250's V6 was blasted by Consumer Reports for not being sporty and at the same time not being fuel efficient. The 2.0 Turbo would increase Horsepower by 30. I would expect fuel efficency to improve so it's a natural fit. The engine placement would be inline instead of transverse like the NX so it could be a new design as well. The current 3.5 is at the end of its design cycle. An increase in power would need to be balanced with Improved gas mileage. This could accomplished with a turbo variant but i doubt that will happen. The range of the variable valve timimg into Atkinson cycle is more likely. The Germans exude performance and torque at the expense of reliability. Porsche's are legendary for squeezing power out of small displacements. Their engines also blow up a lot and fail. Lexus is not that type of manufacturer. A new and improved 3.5 should reveal the mindset at Lexus for the next cycle.
Well all German hybrids are plugin with FI ICE. Good on paper, not so good in real life compared to Toyota. But how to prove that to the rather ignorant and easily deceived customer?

Surely the ES as it heads into its 4th year will be freshened with more tech features made standard to keep up with the competition.

Would love to see a CT200t. The 200h has a nice body, but it does not have the power for the look. The turbo would fit this perfect.
There only three Lexus models that i am keen on seeing this year first up on the Menu is RC200t followed by the close to production ready LF-LC/ final the RC convertible