END_OF_DOCUMENT_TOKEN_TO_BE_REPLACED " /> Lexus GS F Prototype Spotted in Arizona? | Lexus Enthusiast
Menu
Log in
Register
You are using an out of date browser. It may not display this or other websites correctly.
You should upgrade or use an alternative browser.

A possible Lexus GS F prototype has been spotted in Arizona by Club Lexus member I8ABMR: 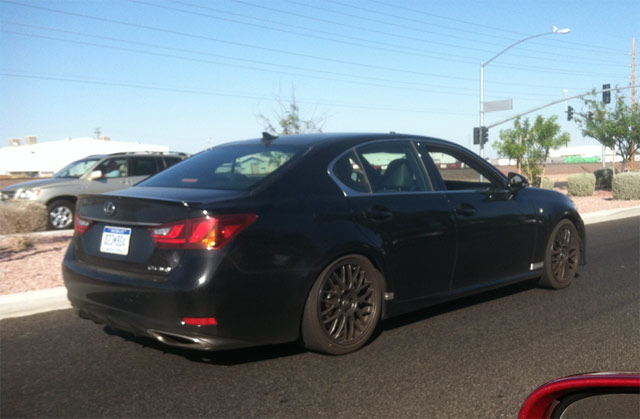 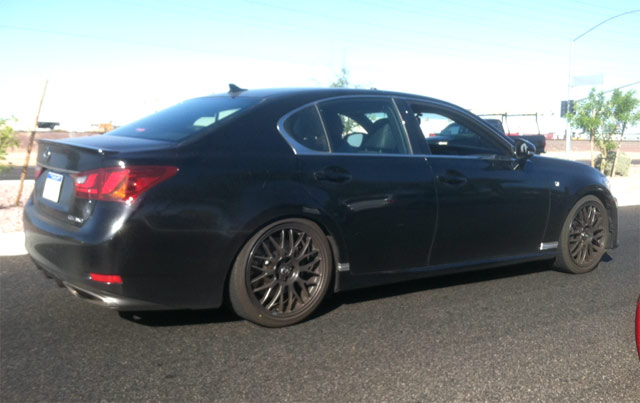 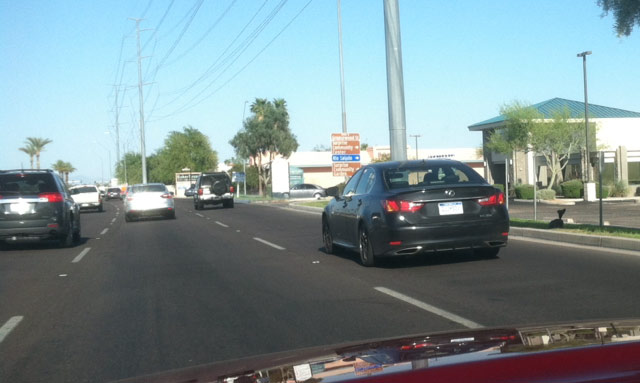 It may look like a roughed-up GS F SPORT, but there are a couple key details that suggest otherwise — the Michigan manufacturer plates and the proximity to the Toyota Arizona proving grounds are the first clues, but the lowered stance, larger brakes, duct tape on the side skirts, and the same BBS wheels seen on the German GS F prototype all point to a Lexus test mule of some description.

Still, the subtlety would be hard for most people to pick up — good on CL member I8ABMR for noticing. Here’s how it all happened:

I pulled up next to him and he had his windows down. I asked “Is that the new GSF?” He nodded yes and gave me a thumbs up. After I spotted it and he knew I knew, he started backing off BIG TIME.

He would stop 6 cars back at the lights when he was supposed to be next to me. At one point I was going to try to shoot pics from the sunroof.

This very well may be the GS- F but remember this probably is a mule and the mules all look totally different than what's expected and what actually comes. I mean they do need a platform to test the engine and things, and that's where the standard GS comes into play simply beefed up.
i hope so...this means its very close.....:)

Looks more like a LCi type upgrade. Don't know what Lexus calls their mid-cycle model upgrade but this looks to be like one. Don't seem to be hearing any news of a test mule romping around Green Hell. I'll believe the rumors then when it is spotted there.

The GS-F test mule was already spotted testing on the Nurburgring earlier this year. You're a bit behind times...
Yea, just a bit.

That's not no GSF test mule, the guy straight up lied to you!
I doubt this is a test mule of the up coming GSF ,why is not the same as the one spotted in Germany?

Because they can have more than one mule at any given time?

this car need of 600hp at least
Can't wait for the GS-F to be announced. It would be a best car to buy for your money if it can stay around $72K. Hard to find a luxurious & spacious car with great pricing, aggressive & sporting exterior, elegant & modern interior, excellent driving dynamic, and awesome performance. Lexus got it all, just lack the last part of awesome performance. I'll trade in my boring V-6 with 6 speed, 2013 GS-350 that lacks power.
The problem is what would be under the hood? The V8 in the RCF isn't nearly powerful enough to play with the M5.... BD

True that BD, although it can if they force induce it.
If they can keep weight under two tons, they can get by with 550 HP. A lighter car with better driving dynamics would work well. But if it wants to get notices, 600 HP is what it needs.... BD