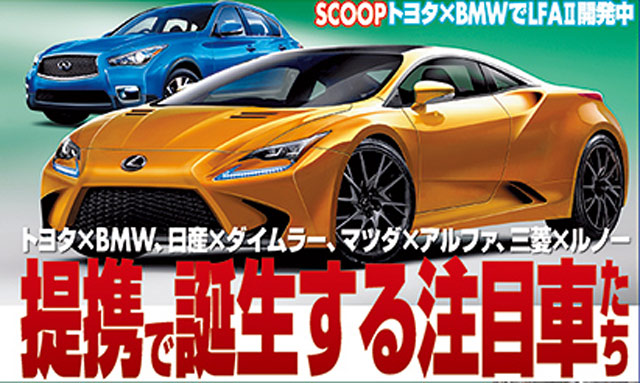 Japanese magazine Best Car remains convinced that Lexus & BMW are working together on a new LFA supercar, devoting their cover to the idea for the second time in six months.

Here’s a better look at the rendering: 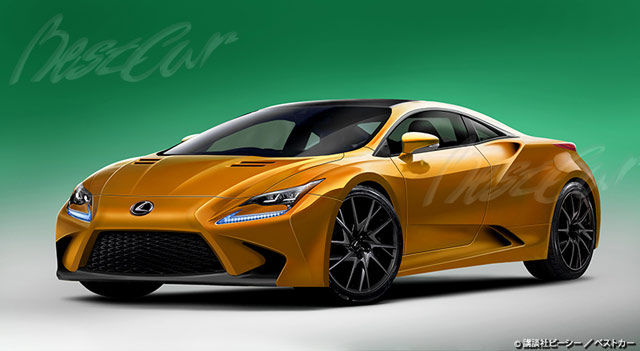 The rumor of BMW & Lexus working on a next-generation supercar is a recurring theme, but it makes little sense. The LFA was a proud moment for Lexus, and it’s the best possible example of the brand’s new design/performance focus — why dilute that powerful statement by involving a rival car company with its successor?

Not feeling that rendering.
The spindle grille is missing. Well I'm more excited to see the production model of the LF-LC than this, which was already confirmed for production. :)
Again, BS rumors. I just wish these nonsense and illogical rumors just stop. Lexus would never collaborate with BMW on LFA 2. Lexus already has prep'ed the 5.3 Liter V10 that will be used in the next LFA. There is no value BMW can add since Lexus already had done all of the work in LFA 1.

Why not? BMW is one of the best carmaker (talking about the whole car history) when it comes to sportscar, just remember the flamboyant 1978 M1 or the amazing Z8 which has been their last supercar, now they have the i8 and that's a beautiful supercar with an amazing hybrid powertrain that I wouldn't mind to find on this Lexus. Strange forum, people are always ready to blame BMW's while, in the same time, they praise Audi wich cannot even hold a candle to BMW.
I am not arguing. I am just telling this will never happen since Lexus has nothing to gain from it. The BMW/Toyota collaboration is nothing more than a Z4/FT-1 project collaboration. That is it. Lexus already has done something BMW has never even come close to (and don't tell me M1 even for its time was anywhere close to the LFA. No M1 was not anywhere close to Lambo and BMW. Read the reviews). Lexus has done all of the groundwork with the LFA and have one of the very best engines ever made with all of the carbon fiber looming process. There is no way Lexus would ever get in bed with BMW. Like someone else wrote, the M division chief was making fun of the RC-F saying it will not be able to compete with the M4. He is merely echoing the sentiments of how BMW forums and owners feel about Lexus. There is no way Lexus would build an LFA successor with BMW. Mark my words down.
For someone so convinced you don't provide much in terms of rational arguments.
Why? He is 100% correct and all of his arguments seem rational. Lexus has absolutely ZERO to gain from building a super car with BMW. I could see benefits in making FT-1 shared with Z4 as a sports car, but there is nothing Lexus can gain from BMW in the super car world since Lexus is completely on a different level in exotic super car world.
The best BMW can do for a hefty $120,000 is a 4300 lbs pig called M6 that wobbles all over the track and is numb, sterile driving experience and the best it can do around Nurburgring on racing slick tires is 7:55.
Fkc audi! I have a huge problem with Lexus owners/fans who bash BMW and praise Audi. They just doing it out of slight. #petpeeve #wegoingtowar I str8 regulate on some foo's if they do that in person.

Anything to sell magazines. No matter how laughable they are.
No way! not possible (I hope), they can't just tarnish all the work and dedication on the LFA like that, not now at least, it's way too early in the game for a replacement for such an amazing car.
Recently, the BMW M division chief was making fun of the RC-F and claiming it cannot compete with the M4 because according to him "it is not a race bred car" (yeah, complete BS since RC-F is far more race bred than this current generation turbo M4). You seriously think a brand that makes fun of Lexus' biggest effort in recent times will be collaborating on a super car? That is absolutely laughable! Why bother even publishing these rumors when they don't have any merit whatsoever?

He can eat his words back becaude the RC F was even co-developed with the IS F CCS-R, and even had it's engine on it and ran on the Pikes Peak and other races. Boy I'm starting to wonder what BMW is doing, first the FWD they're going to make and now this?

A fair bit of confusion regarding the BMW/Toyota collaboration. Is it an LFA-replacement? Is it a Z4-type of car? Is it the Toyota FT-1 (Supra)? I have absolute faith it'll turn out to be something great,whatever it is.
BS! LFA II is pure Lexus. LC (a.k.a LF-LC) is pure Lexus. BMW/Toyota car is yet a long way. It will be the Z4 replacement, then 6 Series replacement, and likely GT86 replacement.
Current LFA looks so much better than that rendering. And two rivals working on Halo Car??? Makes no sense.
Lexus is PERFECT... Why would you want to ruin it NOW!
Well, I beleive there is a truth behind this. It may not be the next Lexus LFA but it makes perfect sense for BMW & Lexus to work on such a collaboration. Laying out the facts. BMW is one of the leading mass production luxury performance car manufacturers, infact their engines are very sophisticated and high tech. Not to add that they are the masters of turbocharging. This is a market niche where Lexus has just started to think about. At the same time Lexus is the leading mass production luxury hybrid cars manufacturer. Guys, don't be angry but Lexus has continuously failed to produce an engine that meets the perforemance levels of competitors. LFA, 560 BHP 5.3 V10 wow, how about M6 4.4 V8 twin turbo 570 HP, that is the real wow. Why is it taking them a long time to announce the final RCF engine specs, I will tell you, because the new M4 is not as poweful but will most definetly beat the track records, thus the Lexus engineers are tweeking the hell out of the 5.0 V8 carryover outdated engine.

And thus make the most overweight and boring, bland car that sounds like a vaccum cleaner. Good one BMW fan #1. The M6 already with all of the carbon fiber doodads is 4400 lbs with only a 4.4 Liter V8, having all of that extra gear shows you know nothing about engine design.
Replace the most heavenly 4.8 Liter V10 that revs up to 9500 rpm and revs in only 0.5 seconds to redline. That is, the engine that was ranked superior to Ferraris and Lamborghini engines. You are suggesting it should be replaced by an overweight, bland and boring GT pig? What are you on?

BMW/Toyota collaboration is only to the FT-1/BMW Z4 development. That is it. No supercar collaboration. Lexus has already developed a new 5.3 Liter V10 that is being tested in racing with the LFA Code X. It will be mated to a hybrid electic motor and easily could produce over 900 HP easily with 9500 - 10,000 rpm redline.
I BELIEVE the rumors! 1. It is well known that BMW and Lexus have been working on SOMETHING in Japan, and BMW needs a super car above the i8. 2. Lexus has been running LFA mules over the last two years, even after the LFA left production. R&D for whatever is coming next. 3. Lexus will split the costs with BMW anyway, so why not make a better car at half the costs? It's just a smart business decision. The LFA strengthened the brand globally, and leaving the LFA to become the Acura NSX doesn't make sense long term. 4. You really think Akio Toyoda is done making sports cars? Really? The man obviously has a fetish, and he has infinite resources, and a partner that wants to help.... BD

Well, as stated before, considering the M division chief was mocking the F division and saying the RC-F would not be able to compete with the M4 (as ignorant and laughable that sounds), there is no way Lexus is getting in bed with the BMW M division on this.
You can look at it another way. 1. Lexus already has spent the money on the LFA platform and the hard bits. They can just change the styling and engine power to make the next LFA. 2. Lexus has plenty of experience with carbon fiber (they have a loom to make it themselves, turbocharging, a 5.3L V10 they're testing at the 24 Hours of Le Mans, and hybrid tech. They don't need BMW the make super cars. BMW needs them. BD
source?
BMW/Toyota(Lexus) collaboration yes, only for a new modular sportscar platform, but not on the LFA. BMW is too late in the process, just as Honda is too late in the process in regards to McLaren's 911 fighter.

LEXUS has far more originality than this.. Looks like a Lamborghini and I don't like Lamborghini's...
Now this is what I'm taking about. Listen up FOOLS! Stop twerking on the keyboards because this is the perfect, and I mean PERFECT MR2. Yeah, forreal! If Toyota can somehow (Yen/Dollar) wise figure out to engineer a mid-engine MR2 once more. This can work! I love it. Definitely will slot below the new Supra. Conquer another part of the market though not taking away or cannibalizing Supra sales. This is a brilliant render that needs a bit of tweeking to become the all new Toyota Mister Two! #lol not kidding though seriously. Toyota has taken and survived this rough decade. Need to celebrate their brand by bringing back their Icons. Mister Two, Celica, Supra. Winning hearts one real (rwd) sports car at a time. Put some thought into this and it's legit! P.S Lexus/BMW will not carry over to both respective flagship jet fighters. #nothappening However, the partnership will benefit towards the other models. The cross synergies in development, man power, technical & etc.. will allow both companies to drastically reduce expenditure on producing the next _____ car. The non-halo, non-flagship type models. One caveat, the Supra is a halo car IMO, but you get where I'm going. Should free up their secret labs in Munich & Cologne to spend that saved Dollar on their next project.
Looks like a Lotus Espirit
I hope this have a front mid-engine just like the first one.
Why they cease the production ?

If you are asking about the LFA, Lexus in 2008 made the official statement that LFA is all about exclusivity so a maximum of 500 will be produced. Once all 500 were built and sold, LFA project was complete.
They commited a mistake !!