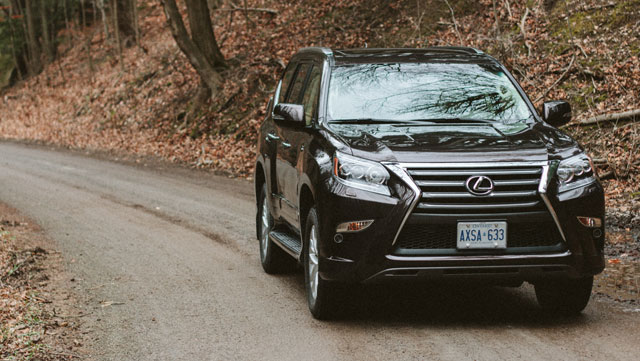 The updated 2014 GX 460 has been out for a few months now, and Lexus has to be happy with the public response. A perennial slow-seller since the second generation debuted in 2010, this recent facelift has been a major success — in the last two months, sales have increased 125% in the USA and 113% in Canada.

Even with its improved sales, the GX is in a strange position — there have been plenty of rumors suggesting that the model will be discontinued, replaced by a seven-seat unibody crossover.

I recently spent a week with the mid-size SUV, in hopes of figuring out where I stand on the issue — should the GX be cancelled or not? 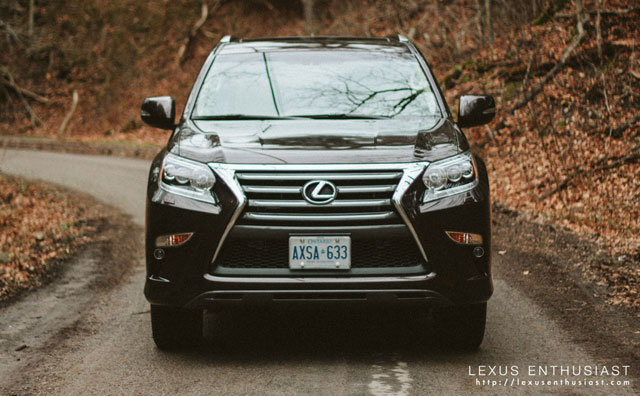 With this mid-cycle facelift, Lexus has fixed the biggest problem with the GX, replacing its droopy front face with sharp angles and a more suitable headlight design — the GX might be the best example of retrofitting the new Lexus spindle grille design onto an existing model:

It’s the side profile that pays the price for the improved front-end — the nose now appears too long and unbalances the SUV slightly:

Then there’s the rear design, let down only by its Altezza-styled rear light casing:

There have always been complaints about the GX’s side-hinged rear door, but it’s never bothered me in the time I’ve spent with the vehicle (that said, space is hardly at a premium where I live and the places I go, so I’m able to swing the door open with reckless abandon). 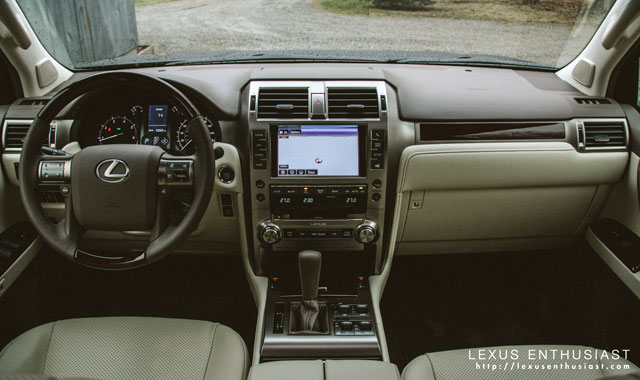 The interior is a functional space, deep in leather but only lightly accented with wood accents. In this particular model, the color scheme is an awkward fit — there’s simply nothing rugged about Ecru:

After growing used to the Remote Touch interface in most other Lexus vehicles, the touchscreen was an enjoyable throwback to a simpler time. In fact, I found this to be the central theme in the GX interior design — everything is oversized, with a emphasis on usability. 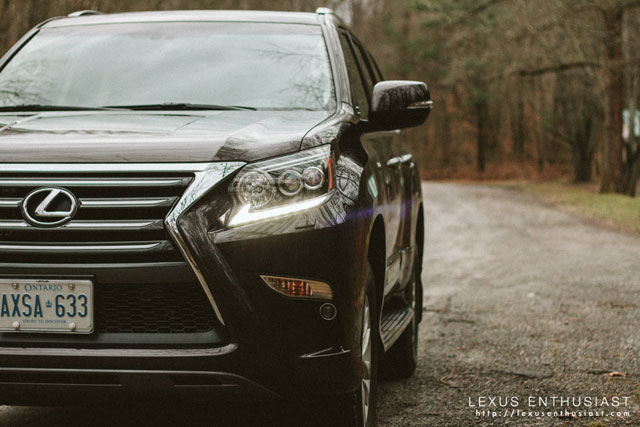 In the winter cold, the engine starts up with a decidedly un-Lexus-like roar that travels right up the steering column.

The GX hits a sweet spot with its performance, the 329 lb-ft of torque delivering ample acceleration — depending on your perspective, it’s either a positive or a negative that I paid little attention to the power.

The adaptive air suspension is well set up, with three modes (Sport, Normal, & Comfort) that are clearly defined and distinct from one another. Without exaggeration, the GX is the only Lexus I’ve ever driven in Comfort mode for an extended duration — it helped to soften up the ride on roads made rough from the winter. 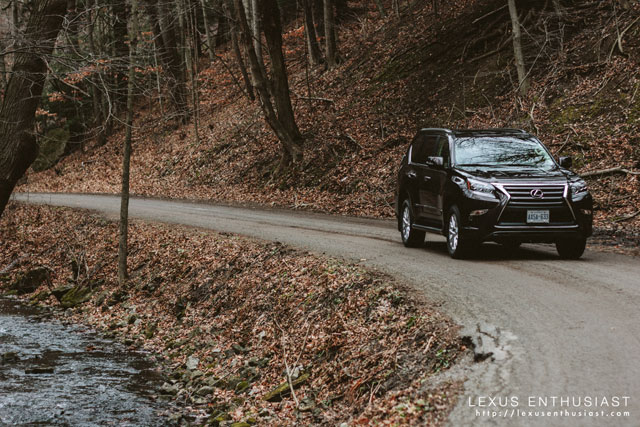 Whenever driving a new Lexus, I try to imagine it in my life — how it would fit in with my three-person family and the way we do things.

Speaking strictly about the Lexus SUV lineup, the RX would be the more logical choice with its fuel-efficient V6 and smaller size, but the GX is brawny, more capable — I live in a rural area, my driveway is stone and dirt, and the GX satisfied my desire for a truck without actually being a truck.

But then there’s the bigger question: Should the GX be discontinued? There’s two approaches to the question, and like many decisions, there’s a disconnect between emotion & logic.

There’s something very raw about the GX — it meets any definition of a luxury SUV, but there’s an underlying workmanlike attitude that brings a lot of character. The interior softens the edges considerably, but there’s a capability that can’t be ignored. No other way to put it — the GX just feels right.

The strike against the GX has nothing to do with the vehicle itself, rather it’s the LX 570 that presents the biggest obstacle. Despite the significant difference in price between the two models, there’s really no room in the Lexus lineup for two body-on-frame SUVs, not when Lexus lacks a more marketable seven seat crossover. Simply put, Lexus will not be discontinuing the LX.

In the end, I have to think the GX is on borrowed time. What do you think?

The Lexus GX 460 (with Premium package) in this review was on loan from Lexus Canada, and retails for $68,721 CAD.

They should keep it on the market making, in 2017, the all new generation. Nobody has a car like the GX in the line up, maybe Mercedes has the GL but it is actually too much SUV and not much Truck/Off Road like the GX, they have the Gelandewagen since the late 70's though and they still don't want to replace it. The GX is one of the most successful re-freshed models in the Lexus line up, maybe more than te LS and in my opinion the Spindle Grille has found its best application on this front, even if I've never been an off road fan,I'd buy the GX only for its beautiful, monumental front end.
Like the RC, the GX offends me from every angle, literally. Lexus makes some great cars, but this just isn't one of them. Anyone who sees, or drives, a Mercedes GL, will cross this off their list quickly and easily. It sells twice as much at a noticeably higher price point. I'm just sayin'..... The one saving grace is it is about $10k less than the Mercedes. But a Lexus should be good enough to sell not just based on price. The GL hits the target market better, and isn't compromised by sharing the downmarket 4Runner platform. I believe Lexus has seen the error in their ways (Not making the HPX Concept from 10 years ago), and will make the correction in 2 years or so..... BD

if they want to delete the GX they should also delete the LX, the LC200, the Sequoia, Tundra, HiLux, Tacoma, 4Runner, Prado, Fortuner, Innova and put all of them under new brand for body on frame truck cars as soon as they won't do that , it will be a stupid move to delete either GX or LX
All those vehicles you mentioned are carrying their weight in the showrooms. They're doing what they're supposed to do for business. The GX is just treading water now, and in a year or two, it'll be back to selling 6-700 a month.... BD
i want to say that NA is not the only place where the GX sold i want you to go to Latvia, Poland, Lithuania, Belarus, Russia, Ukraine, Kazakhstan, Turkmenistan, Romania, Moldova, and all east and south Europe, and middle Asia for them the GX is LX with a price they can afford

They reduce the price for almost 5,000.
Lexus should do more with the design to differentiate from the toyota prado

why every one keep talking about Prado and Land Cruiser as if they are budget cars, i am from Russia and live in Ukraine, sorry but we adore the Land Cruiser and the Prado even more than it's Lexus brothers and i think Toyota making good to see that they are related, because this is a positive point to Lexus to have those brothers than been a negative point

The application of the spindle grill on the GX has transformed this (yawn) bland SUV to a serious looker. Problem is, you have to only view the vehicle from the front and close your eyes for the rest. Interior however is gorgeously upscale, something I'm missing in the latest Lexus offerings with plenty-black plastics in the interiors. This vehicle (and 4Runner) as a body-on-frame SUV can still be relevant in the next gen if and only if the inefficient interior packaging and poor fuel economy are considerably enhanced.

Relevant? Yes Sell for $60k? Sorry. BD
the problem with Lexus is they only re-do the front but the rest is still the same...

Definitely agree on the side profile of the new spindle grill. The GX used to look like it was sitting up high an menacing while sitting next to a car, now with that fold/squish they're doing on the spindle, it's really not the same presence. I do love those rear fender lines though, and they're nice and accentuated in your pictures there.
I think that the GX a good car and the new model features a wonderful introduction to the background and semi- acceptable, but in terms of the interior is still as is the case in the previous model Where I think if the company has updated the cabin and make it somewhat similar to the sedan with improved rear you will find great resonance and an increase in sales unexpectedly because this type of car that the average size has attractive when a lot of people But the focus is always interesting companies in improving sedans over SUVs and improve interior And make the outer body compressed , which makes the car more attractive Look in the cabin GX 2014 they resembling older models of sedans before the update , which shows the arrival of technical late to the SUV .