In an interview with Ward’s Auto, Lexus vice-president of marketing Brian Smith shared some details on how the Lexus SUV lineup might be changing:

The Lexus RX currently is the only CUV in the luxury marque’s lineup. A number of auto makers, including Ford’s Lincoln division, have cited small CUVs as an area of growth in the luxury segment.

“In general, CUVs of any size are becoming a bigger force in the industry. So as we sell more products globally, I think that could lead to new products for us,” Smith says, declining to reveal details.

The rumor of a Lexus compact crossover has been around for at least half a decade — the main difference between then and now is that Lexus appears to have trademarked the name NX to use as the CUV designation.

Perhaps the bigger news from the interview is this passage:

Smith says one of the brand’s two large body-on-frame SUVs, the GX and LX, could be converted to unibody platforms as the auto maker works to meet looming government-imposed fuel-economy regulations.

“In the future, if we could do a 3-row unibody (utility vehicle), I think that’s what consumers would want to see,” he says.

Lexus is the only full-line luxury brand to offer two off-road-capable SUVs, and it’s also the only luxury brand that doesn’t have a unibody SUV with third-row seating. Add these two facts together, and it makes for some very interesting speculation — if Lexus makes a three-row crossover, should it replace the GX or LX? 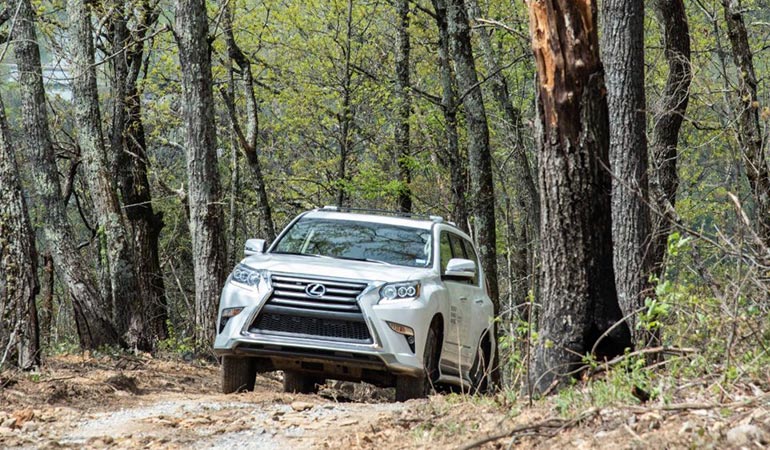 I can definitely see a larger than RX third-row seater replacing the GX when its due for a remodel. Something along the lines of a Lexus with the same size as the 2014 Highlander. I think the updated LX has helped it stay fresh and the GX is the only vehicle that hasn't had a facelift or remodel to fit the spindle grill.
I have always been proud of Lexus' true SUVs! Oh well... Times have changed. If the Highlander has three rows, why not the RX? I wish Lexus would build the ultimate LX with the next update.
Make the NX close to the size of the first gen. RX,take advantage of the new highlander's dimensions & offer the 4th gen. RX with third row seating & taking back what I said last year,keep the LX & legendary Land Cruiser body on frame.While I agree that Lexus' SUV/CUV line-up needs some tweaking to keep it modern & up to date in these segments,I think Lexus should (in some ways) continue to blaze it's own path instead of doing things just because other manufacturers do so.My opinion has taken a 180 since last year in this regard.
Have the NX at the bottom of the lineup, $35-45k, and have the RX & 3rd-row version of the RX, and the LX remains BOF at the top. The GX has never been a strong seller, and they can leverage the incredible brand strength of the RX with a LWB version. The RX would sell more under that name than under any other name. The 5-passenger in 2015 starts at $45k-$60k, and the LWB starts at just over $50k and goes to $70k. I would expect the Toyota Highlander platform to be the foundation for the next RX, and it can use that level of interior space for a 3-row version. The LX is selling very well as is, so why change that? This underscores Lexus dropping the ball with the HPX Concept 10 years ago. That would've been perfect, and dominant, like the RX is today...... BD
Coincidence that I was just thinking the other day that the GX should be replaced with a 3 row unibody vehicle. I have always liked the GX and it's off-road capable nature, but I think R&D money would be better spent on a vehicle more in line with the Mercedes GL and Audi Q7. Lexus/Toyota would make a killing if they taped that market. I personally would like to see the GX turn into a CUV based off the RWD based GS/IS platform rather than a stretched RX. Regardless either would sell better than the current GX. I spent many days in my high school years off-roading and I hate to see those caliber of SUV's fade away, but times have changed.
Get rid of the GX - It doesn't sell or look well enough to hold the Lexus badge.
The RX will remain the same. It is the best selling luxury SUV... However, BD is right, the NX will be the 'CUV'. But the GX and the LX will remain. With the looming threat of the gov't to impose mpg regulations on the fleets of automakers, the GX will improve its mpg performance and offer 3rd row seating; perhaps revolutionary for the industry. In any case, I could see Lexus making the RX available with 3rd row seating; however, with my personal sales experience in our fleet, the MDX gets complaints of being too cramped with its 3rd row seating. The RX, being in the MDX's class should stay the way it is given its success. Make the GX the 3rd row SUV, giving customers an incentive to buy it. Also, keep the LX: it does well over seas; very well. With the NX, RX, GX, and LX... why would you want to purchase any other utility vehicle on the market?

Uhhhhh......the GX does offer a 3rd row. Always has. We're talking about what should replace the current GX, assuming you don't want to sell an $85k 8-passenger CUV to replace the LX...... BD
Fact is, the GX will replace the GX... with a more accessible Infinity JX like 3rd row seat of course. The GX can't and won't die. It already has the money and assembly lines set up for its size and frame (to change, I know). Just like the new IS, the GX can change for the better. The hint in this thread is a hint at what the new GX will be like; an SUV that meats the public's demands. Also, if a 'CUV' costs $85K, it would never sell. The GX (an SUV) now, fully loaded, costs about $62k (cheaper than what our luxury competitors offer), which is miles more in luxury and leagues less in costs than the base $72k Cadillac Escillade. If anything, Lexus can keep the price the same and meet the public's demands while not sacrificing the assembly lines, time, workers, and money already invested in the GX. They will just change it and make something incredible. We aren't talking about replacement, we are talking about innovation, BD.
Actually, the assembly line issues you mention are not that relevant since the GX is no more than a Toyota Landcruiser Prado, sold basically everywhere except America. So they could just move the GX to another platform within the Toyota stable (possibly a lengthened version of the RX to accommodate the third row and make its road manners acceptable.
Like I said, the RX will use the new larger Highlander, and get bigger for a 3rd row model. The GX is based on the 4Runner/4Runner Prado, which isn't selling well here, and will probably be dropped in 2015-2016 year by Toyota. BD

Lexus should take the platform from the new Highlander for there 3rd row SUV and should take the new RAV4 for there new small SUV. I think these two SUVs would sell very well around the world. Just my 2 Cents....
My wish list: NX as the entry-level compact CUV (35-45K), RX mid-size 5-passenger CUV (40-55K), RX L (long-wheelbase) (45-60K) CUV 7-passenger to replace the GX, and the LX to remain as the premium SUV (80K+)
The only reason the GX did not sell well because the new one is just to dang ugly no like the 2004 version and Lexus is lagging on the gx update/ total replace
The LX is a great vehicle! True luxury offroad
The gx should be like the infiniti jx and the pathfinder no one wants a truck anymore dont take it out of te game becuase you too lazy to form a new one
The final design for the 2016 RX was just frozen very recently, so it's not surprising that Brian Smith is commenting on this right now and this comes exactly 6 years after design work on the current RX was finished in early 2007.
I would love to see the RX With the third row seat!!!! And bring back the touch screen navigation system too!!!!
Also make sure that the third row seating has a power button like the Merecedes GL.....just saying :)