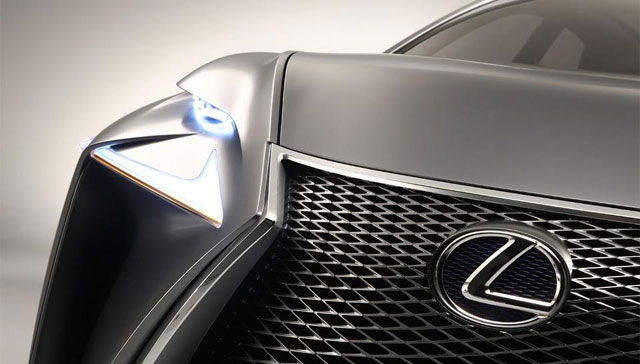 According to Car Advice, Lexus may be considering something even smaller than the LF-NX:

Asked about the potential for a compact SUV during a media round-table at the Frankfurt motor show, Lexus design division project general manager Takeshi Tanabe responded: “Why not?”

Larger than originally expected at 4640mm long, the LF-NX concept – set to be transformed into the Lexus NX for production from 2014 – is almost identical in size to the Audi Q5 and BMW X3 that compete in the premium mid-sized SUV segment.

It leaves space for an even more compact model like the GLA, Audi Q3 and BMW X1, all of which are roughly 150-200mm shorter…

The idea of Lexus building a smaller compact crossover is interesting speculation, but there’s a bigger story here. Going strictly by length, here’s how the competition breaks down:

If the production NX ends up 4640mm long and the RX remains at its current length of 4770mm, Lexus will have the smallest size gap between models (only 110mm difference). Unless Lexus plans to have two models occupying the same segment, there are two possibilities, as I see it:

There have been rumors of a Lexus three-row crossover for some time, with the assumption that it would replace the GX in the lineup — could this new model be the RX? Should Lexus mess with their best-selling model?

Not putting much into this story because: 1. Never heard of Car Advice before today. Have no history breaking major car news. 2. Lexus seems very interested in keeping the prices of their vehicles above the basement, and making two smaller CUVs runs counter to that 3. Lexus has had a hard enough time breaking down and making another CUV to take sales from the RX. Why make two, when the vehicles mentioned above aren't exactly setting the world on fire? Always questioned BMWs X1/X3 strategy. Don't see the value in making two crossovers to basically compete against each other. What's the business case for two crossovers of similar price? The ONLY way this might make sense is if the NX comes out looking as hardcore as the concept, in an effort to win young male buyers for the brand, and they make a softer, gentler crossover to woo traditional Lexus shoppers. That fire-and-ice strategy has worked for the Lexus ES/Lexus IS sedans. I wouldn't make make a smaller crossover, and then rush to dilute it's market. The smaller luxury CUV market isn't near as large as the entry-level luxury sedan market, so I'd vote against that strategy, at least until smaller CUVs are selling 7-8k a month on a regular basis (The Acura RDX is actually the best selling vehicle in that class, underscoring how weak the class really is)..... BD

Looking at BMW X-sales for 2012: (from wikipedia) X1: 147,776 (8,947 in the US) X3: 149,853 (35,173 in the US) X5: 108,544 (44,445 in the US) So from a US market perspective a smaller car is somewhat pointless, but globally the X1 sells as much as the X3. And Lexus has a long tradition of offering different cars in different markets so why not in this case?
Exactly my thought... while the US love the large SUVs, most of the rest of the world prefer smaller ones. Maybe a smaller SUV or even the NX are not targeting the US and trying to lift Lexus sales in other markets. I think there is space for a smaller SUV than the NX that could be based on the CT (like a raised next gen CT with same wheelbase ~2600mm in a similar way the GLA is to the A class). I always thought the prototype going around of the raised CT was potentially just that. The NX would be a step up (RAV4 based but longer wheelbase ~2700mm) and the next gen RX would grow in wheelbase to make room (~2800mm), remaining a 5 seater with a option for 7. Then a proper 7 seater SUV (~2900mm) above the RX (to replace the GX) with the LX (~3000mm) at the top to tackle the Ranger Rover. Very much like the Merc GLA, GLK, ML and GL.
Why can't the next CT BE the smaller SUV? Why can't it have a gas engine? Another CUV will also cannibalize the CT. The CT should have a gas engine, and be more than a niche product. Regarding the X1/X3, if you cut one or the other, the sales of the other would double. Just like if you made another CUV the size and price of the RX, RX sales would be cut in half..... BD
Sure, a raised AWD CT could work just fine. Tanabe-san's "Why not?" doesn't give any hint in either direction. The CT can't be called a niche product for Lexus - in 2012 it was only outsold by the RX globally. Probably down to 3rd in 2013 with new IS? But yes, it needs more (engine) options. Cutting X1 or X3 would not double the sales of the other. Increase yes, but far from doubling (at least in a global perspective). Market segmentation and price discrimination is Marketing 101.
Agree, the CT needs to be a volume seller for Lexus (again maybe not in the US but definitely for the rest of the world. More engines are needed though, both hybrid and petrol only. They could call a raised CT CX...

lexus should not touch the RX at all. its so successful why mess with it? even if the NX isnt that much smaller than the RX, it will be cheaper and hopefully more aggressive/sporty. that should be different enough to not affect RX sales. the rumored TX should be the 3 row crossover and the GX should quietly disappear. lexus may want to keep the LX around just because, but honestly it doesnt sell enough to matter one way or another. the RX is the volume king. the NX can be the cheaper/sportier/smaller CUV and the TX can be the bigger/more luxurious CUV.
I thought the NX was the smaller crossover for Lexus? leaving the RX to grow and have three row seat then axing the GX since its not doing too well in the market.
Might this be the CT mule with the increased ride height? The CT's shorter wheelbase made it seem like an odd choice as an NX mule.
I wouldn´t be suprised if the next Generation RX is based on the new Highlander platform. just my 2 Cents...

I think you're right.
I dont think so. My bet is Highlander will spawn the upcoming TX and the next gen RX will increase in size but not that much.

The RX is suppose to be longer. Its suppose to have a third row option (rumored). The NX is suppose to be just a little smaller than the current RX. I don't see why not having an even smaller crossover. If they keep the GX has and SUV and have the even bigger crossover the TX along with the LX, they will have a really good lineup. Then we'll get the RC (F) and GS-F which will add to the sedan lineup. This will improve the sales. BUT I do see having a smaller CUV than the NX may kill the NX or CT.
Oh, boy. In my opinion SUVs are the lat thing the world needs. Lexus won't change anything at that, neither with two, nor with three unibody SUVs in the lineup. Basically SUVs aren't really good at anything. They don't have more space inside than a normal wagon. They are no offroaders. They just have lots of drag due to their height. And cost additional money for no real benefit whatsoever.
I don't think so. The concept might be longer than the production one.