The Lexus RC F prototypes are getting a workout — first it was Germany, then Los Angeles, and now the camouflaged coupes are in Death Valley, California, with an IS F & BMW M3: 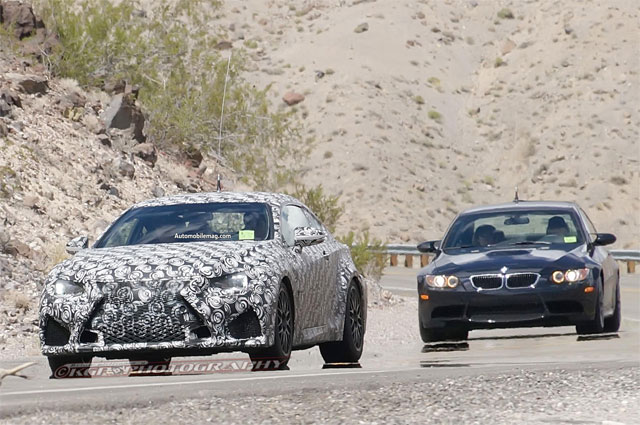 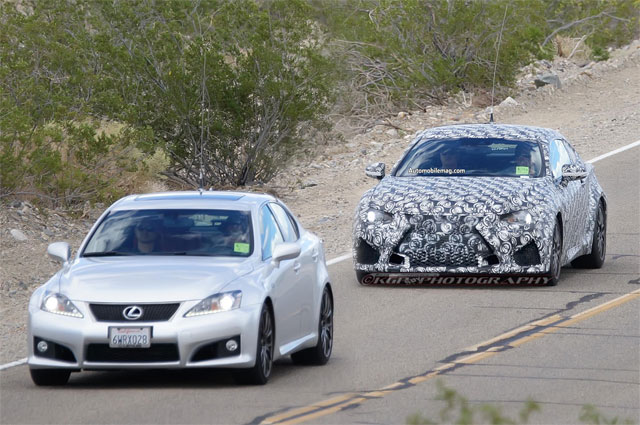 The prototype looks identical to the cars driving around the Nürburgring last month, but a trip to Death Valley is curious — if the purpose of the trip is further hot weather testing, why make it so public?

Hard to drive it with a cover on... ;) Lots of prototypes get put through the paces in Death Valley.!! They also have lots of data collection equipment.. When they parked near the Post Office for lunch, they secured the RCF with a full car cover. ~ Joe Z
I'm getting the RCF!
Death Valley is like American version of the Nurbergring in a sense. I've been in Death Valley and gotta say, it's pretty dang hot! Ran our Odyssey went 90+ mph through it and no problem, the heat gauge didn't move a bit. But again it's not a performance V8 with 455 bhp. Lol
the current IS-F really aged very well, still gorgeous. This new batch of spy shots showed that RC-F will not have a liftback.
I'm sure they don't intend to make it public but you can't forget those of us in the Middle East that easily see 50C during the summer. They need to make sure that the car doesn't overheat.
Cars get tested here all the times, Krew! Many Lexus included! Isn't this Brenda Priddy's territory? :P
Did anyone notice the two new additional holes at the corner of the spindle grill ?

Yep! Like the IS F Sport. Probably for cooling the brakes.
i think its more likely for stability(aerodynamic), the LFA-ish inlets were more than enough to cool the brakes.

Mos def the RC is my next ride, its interesting that it is accompanied by the outgoing M3 coupe and ISF sedan.
Come on now krew, you should know the answer to this. Lexus is publicly testing the RC F because they WANT us to see it. If they didn't want enthusiasts and media to see the camo'd car, then trust me we'd never catch a glimpse of it. Lexus is doing it to generate hype and excitement. This public testing is among the last phases of testing, since the full production body is underneath. Lexus also does secretive testing of more future models in top secret test sites that we never see, and also they test future models under the body shells of existing models, which makes it impossible for enthusiasts or media to tell what exactly is being tested.
The 2IS never gets old does it..
Look at that profile shot. Did you ever see more graceful lines? This is going to be yet another design triumph for Lexus. Can't wait! :-D