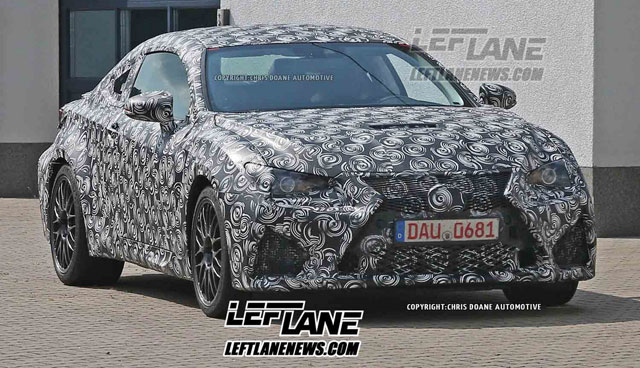 The day has finally come — a Lexus RC F prototype has been spotted by the folks over at Leftlane News. Let’s take a closer look at some of the photos, starting with the front end: 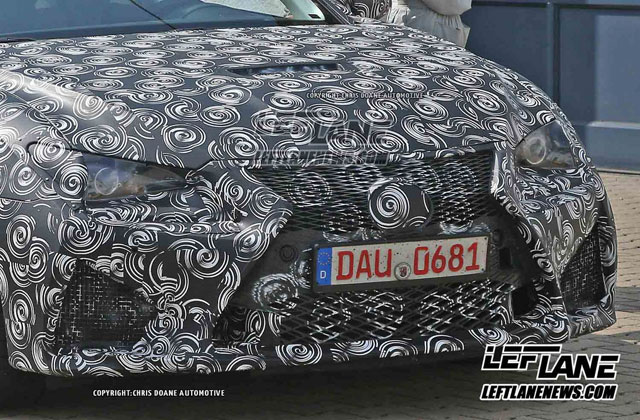 Beyond the spindle grille, the front end is all LFA — the headlights, the lower vents, the swoop in the front fenders, even the hood vent bring the Lexus supercar to mind. 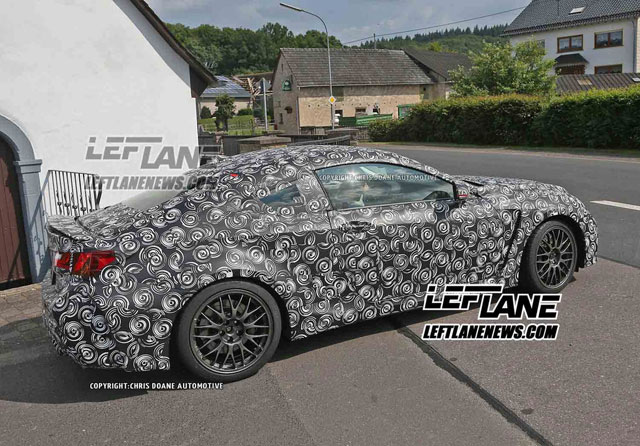 The side profile could be the most important angle, as it reveals the telltale fender vent — finally, there’s proof that a new F model is on the way. The car also looks bigger than an IS, though proportion is always a difficult thing to judge in spy photos. 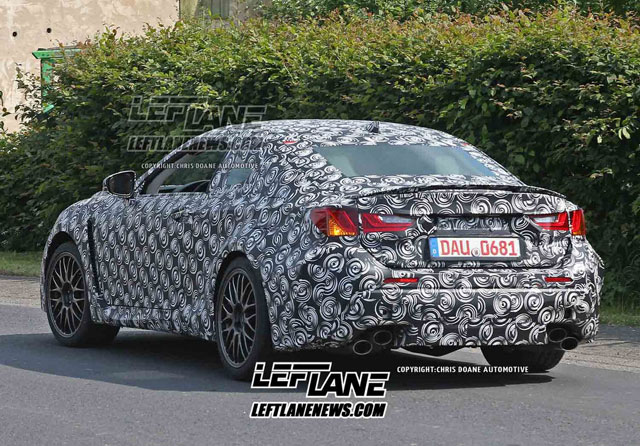 The rear also shows off F styling cues with the quad exhausts — it also appears the car may have a hatchback, and a rear design that looks more like a GS than an IS.

After all the rumors, these photos are the first real proof that Lexus will be releasing their first mass-market non-convertible coupe since the original SC — there’s bound to be more details in images, and I recommend everyone head over to Leftlane News for the full gallery.

First things first, what do you think?

Agreed. Apart from the tail lights which are pretty similar if not same as GS, the trunk shape does seem GS-ish - I think this looks better than the new IS design and same goes for the front end treatment (which doesn't have much in common with the GS) I expect its still going to be RC-F though. This is looking good compared to the (IMO) dreary new 4 series... Lets hope its a competitive product though in terms of engines etc.
Couldn't help but notice the Yamaha box on the floor (bottom right hand corner). Yamaha and Toyota's engine development collaboration includes some awe-inspiring stuff...let's hope this is another.
Good eye -- the camouflage had me distracted.
Excellent job spotting that, as that's what I first noticed too and quite shocked no one else has picked up on it.

Is the other car in the garage a GS with some available F-Sport exhausts or is there also a GS-F in the future?

GS F has been trademarked by Lexus -- wouldn't surprise me if it was a GS F prototype.

I want one so bad it hurts!
Yeh! I Saw the "GS-F" there too! I'm wondering if these are just mules though. I love the front of the RC a whole lot! I just wish the rear was more IS or LF-CC like. The GS rear looks good but I just feel like it makes for sense to go with one of the other two. I also love the lines of the car. I see a lot of LFA in it, that's why it could possibly be a mule. But who know?! It'll look good no matter what.

I think this is far too polished to be a mule -- I bet it's the final body style, with some foam inserts in the rear bumper to make it look weird.
True. I just really hope the shape stays the same! It is so different for a coupe. I LOVE IT. It's just the taillights aren't camouflaged at all. It just makes me wonder if this is what the actual rear will look like. GS looking rear or LF-CC rear will look great on it though.

finally!!!!!!!!!!!! RCF
This calls for a celebration! Proof it is coming and probably closer than we think. We saw IS Prototypes about a year prior to its release, so can we expect the RC released in 2014 as a 2015 model year?
Omg it's too soon I am not ready!!
More pictures on gmotors.co.uk - shows interior undisguised same as IS. They are reporting this as an ISF coupe.. Strange that the ISF or RC's rear lights and trunk appear more conservative than the IS Saloon so far.. Hope the headlights are better than on the IS with its beady little squinty eyes.
I'm bit surprised to see that much of this prototype: no camouflage of the front/rear lights, the Lexus spindle grille. The coupe line is certainly recognizable. Except some details, what's the purpose of the camouflage ?

To hide from preys (paparazzi's)
Yeah I know. I meant that it (the camouflage) is not well done, this must have a reason.
It is all part of the pre launch strategy. Lexus would never allow photos to be released without their knowledge/permission. Lexus only ever start having car's being "spy" photographed when it suits them, generally 12 months before release. They have their own private testing tracks for the years between a cars development and the intended release.
Correct. The current IS-C first began testing on private test tracks in early 2006, until the final proportions were frozen in 2007. The 2014 IS was already testing prototypes in 2011 and the RC prototypes have been testing since early 2013. Japanese photographers have stringent restrictions levied against them by Japanese automakers, so no one sees anything.

PLEASE PLEASE PLEASE PLEASE... For the preservation of all meat-lovers let this be a #true F model. *thumbs up*
Anyone noticed a "Yamaha" box behind the "GS-F"?
GS-F coupe...pretty please.....
Retractable spoiler can be seen at the back of the car.
Thanks for the love, Krew. I've been straightening out those fools on LLN for years. They hate Toyota/Lexus over there, so anybody who wants to take up arms against all the haters, feel free to join me. BD

For that same reason I don't EVER visit that site again..... Thanks for the pics and the good eyes.....

In one of the pictures in the gallery, the GSF is parked next to the RCF mule in the garage..... BD

So many reasons to be excited, as pointed out, that retractable spoiler looks sweet, and the proportions look terrific. And I always was a fan of the stacked exhaust so yes! Is it too much to ask for another IS-F (4 door) I really like the current one. But to hell with suggestions, I'm happy with what I'm seeing today!
Finally a masculine looking coupe. Enough of the soft things coming out of Germany...
That overhood scoop means it will have a force inducted engine?
Even though I would have preferred more IS-ish tail-lights/headlights (more avantgarde which I think is important for a coupe), I think Lexus may be doing a MBenz type tactic with the coupe. They could be positioning the RC as a "GS Coupe" but have it running on the IS platform (which is just a slightly shortened GS platform anyways). That way, they can charge a GS type price, for IS underpinnings. MBenz does this with their E-Class coupe, which essentially is a C Class chassis but with E class skin, and they charge E-Class prices for it which equals a much healthier bottom line. Actually, on closer insepction of the LLN pics, the close up shots of the front seem to indicate the separate DRLs might still be there.
Thank you Lexus, now I don't have to settle for a bmw coupe.
Look at the Yamaha carboard box sitting beside the RC-F Yamaha is getting involved again, which is fabulous new. The RC-F needs a Yamaha engine as in a, scaled down version of the Lexus LFA engine. This is going to be great.

Maybe they can work the same LFA magic on a high-strung V8 from the ISF? That will be the only way to get it to the needed power levels. Yamaha can do the job..... BD

The vent on the hood makes me hope for V6 Twin Turbo ! :P I checked the test prototype all over last night , besides the GS taillights , everything else seems production ready ... but then I think again , could they just put GS taillight on it ? Because I remember Mercedes used to put E-Class-alike taillights on CLK , but CLK have C-Class-alike headlights .
A scooped-hood does telegraph a forced-induction system. Given it's location, that tells me this will be blown.... BD

I was hoping boost instead of blown . XD

I have looked at the close up front grille this could be the SC F instead of the RC F, i could be wrong though but my gut feeling is telling me this is the LFLC getting ready for production as an new SC F.

Not exactly, as the LF-LC's production design was frozen in March. An LF-LC prototype will not be tested outside of Japan until at least Q4 2013/early 2014. Likely only test mules in Japan are running until STEA(initial full body car) prototypes are ready in several weeks.

The brake are insanely huge ! http://lh4.ggpht.com/-x1ne5Is8bsE/UeSILwvEwTI/AAAAAAANeKw/g6uKm9tOPTU/s1600/New-Lexus-IS-F-Coupe-10%25255B3%25255D.jpg http://lh6.ggpht.com/-rVBGcWZK92Y/UeSINRJk-JI/AAAAAAANeLA/hq0IXBtfEgQ/s1600/New-Lexus-IS-F-Coupe-11%25255B3%25255D.jpg
I think instead of arguing whether is an IS-F or GS-F, it is probably the RC-F. Since RC is likely to slot between IS and GS, its reasonably to assume Lexus may have share elements between the two. If so, its a far better approach than BMW, who crank out a 4 series that look like a 3 but cost almost like a 5 series.
The shape of the lights under camo seems to indicate this is based of the IS. Not liking the hood scoop. I would have preferred a V8. I think i like what i see from the profile and rear. I hope it has the interior of the IS with the LFA guages. Cant wait to see the real thing.
O it's finally happening!
I would love a stretched Version of this car With 4 doors, kind of like the VW cc. A so called "4 door coupe". That would be a Return to the basic shape of the 3d gen GS, which would be Nice!