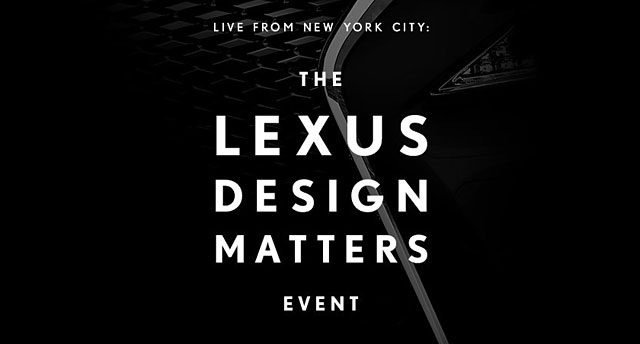 The Lexus Design Matters event in New York City is set to start tonight at 9pm ET/6pm PT, and you can watch it live right here:

As a reminder, the event will be a showcase of Lexus’ global commitment to design, and will be hosted by Akio Toyoda.

Event is now over — check after the jump for a summary of the announcements.

The main announcements made during the Design Matters presentation, copied directly from the press release:

INTERSECT BY LEXUS and CRAFTED FOR LEXUS

INTERSECT BY LEXUS will be a unique space in select global cities where people can experience Lexus without getting behind a steering wheel. Neither a dealership, nor a traditional retail space, guests will be able to engage with Lexus through design, art, fashion, culture, movies, music and technology.

The architectural space will be developed by Masamichi Katayama, the world-renowned interior designer and founder of the interior design firm Wonderwall. The first INTERSECT BY LEXUS will open in Aoyama, Tokyo, in the summer of 2013, followed by locations in New York City and Dubai.

Within the space, Lexus will display exclusive retail items called “CRAFTED FOR LEXUS.” Lexus commissioned Japanese artists to create unique pieces that are inspired by the brand’s philosophy: traditional craftsmanship with timeless beauty and innovative form and function.

A new lifestyle magazine, BEYOND BY LEXUS, will feature Lexus vehicle information as well as stories on travel, architecture, art and design from a global and regional perspective. The magazine will be published twice yearly and translated into numerous languages around the world. The magazine recently debuted and will be available on www.lexus-int.com on May 1.

The LEXUS DESIGN AWARD is a competition to inspire the next generation of designers. Entrants demonstrate their creativity and are recognized for their accomplishments. This prestigious award was announced in Tokyo with the top two winners earning the opportunity to work with mentors Sam Hecht and Junya Ishigami. Their works were displayed at Museo della Permanente in Milan, Italy, during Milan Design Week.

Lexus collaborated with The Weinstein Company to support emerging directors from around the globe, commissioning them to bring wonderful stories to life as short films.  The stories are beautifully told and explore the theme that “Life is Amazing.” They will debut at various film events around the world and will be featured on the Lexus global website www.lexusshortfilms.com later this year. Lexus and The Weinstein Company will hold the world premiere event at the 2013 Festival de Cannes in May.

On May 1, Lexus will launch a global advertising campaign with the theme “Amazing in Motion.” Featured in the campaign are spectacular larger-than-life human figures. High-technology 3-D printing was combined with fine craftsmanship to create the figures. Lexus materials, including bamboo and walnut found in the interiors of Lexus cars, as well as Lexus exterior paint, were used to construct the figures. Thanks to advanced technology and smooth artistry of puppeteers, the figures come to life on a grand scale.

This better be good Lexus!
Lexus released a press release with all of the announcements expected tonight: http://pressroom.lexus.com/releases/lexus+celebrates+design+community+design+matters+april19.htm?view_id=32573
All of the Twitter mentions of the event: https://twitter.com/search/realtime?q=%23ldesign&src=hash
Akio rocking a bowtie:
Ok, show's over.
Yaay to Dubai. :) I hope I can score an invite for the opening. I'm going to send Lexus UAE a message on Facebook and ask. If I do, I'll take pictures and share them with you Krew,
That was weird, yet interesting and cool....hmmmm...
Can't wait to see the Lexus short film "Swimming in Air" The Trailer looks exciting and the child actors are great.