Poll Results: What Type of Concept will Lexus Reveal?

Last week, we had a poll asking for your guess at what type of concept Lexus would be unveiling today — voting closed early this morning, and after 939 votes, here are the results: 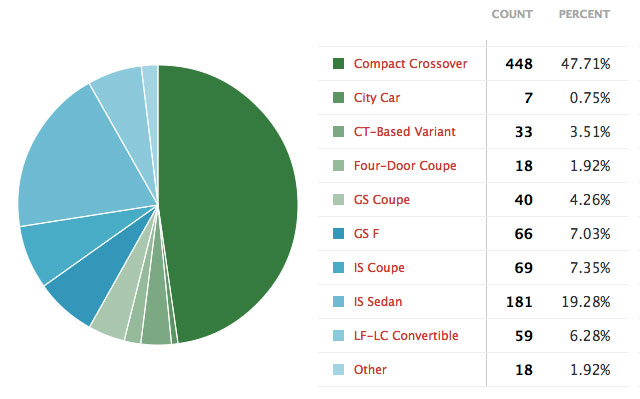 Supported by an Australian rumor and some dubious spy shots, almost 50% of voters believed that Lexus would introduce a compact crossover — in fact, only 7.35% of voters guessed correctly, as the LF-CC concept revealed today is almost certainly a precursor to an production IS coupe.

One thing’s for sure, the level of secrecy before the LF-CC launch made for an exciting finish — thanks to everyone who voted!

I'm one of the 7.35%!! lol Very excited about this as an IS coupe is what I have been waiting for.

You voted with your heart and it worked out. ;-)
ahaha She should've been wrong! :P
Same here but it was for the CUV. Oh well, I'll have to keep my RX a little while longer which come to think of it is really not a bad thing.  Love the IS coupe and maybe I'll start to get the itch to change my CT for it next year.