Lexus has announced the LF-CC, a coupe concept that will make its world premiere at the Paris Motor Show at the end of this month — here’s a video from Lexus UK to get things started:

Combining elements of the LF-LC concept along with a dash of the production GS, the LF-CC is a clear indication that the next-generation IS will be available as a coupe, filling one of the largest gaps in the lineup. 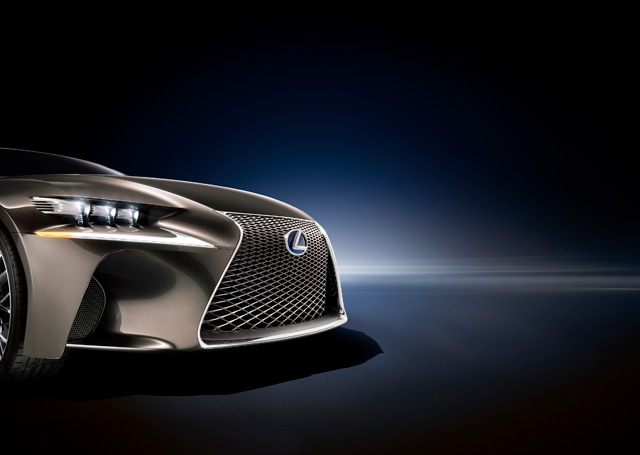 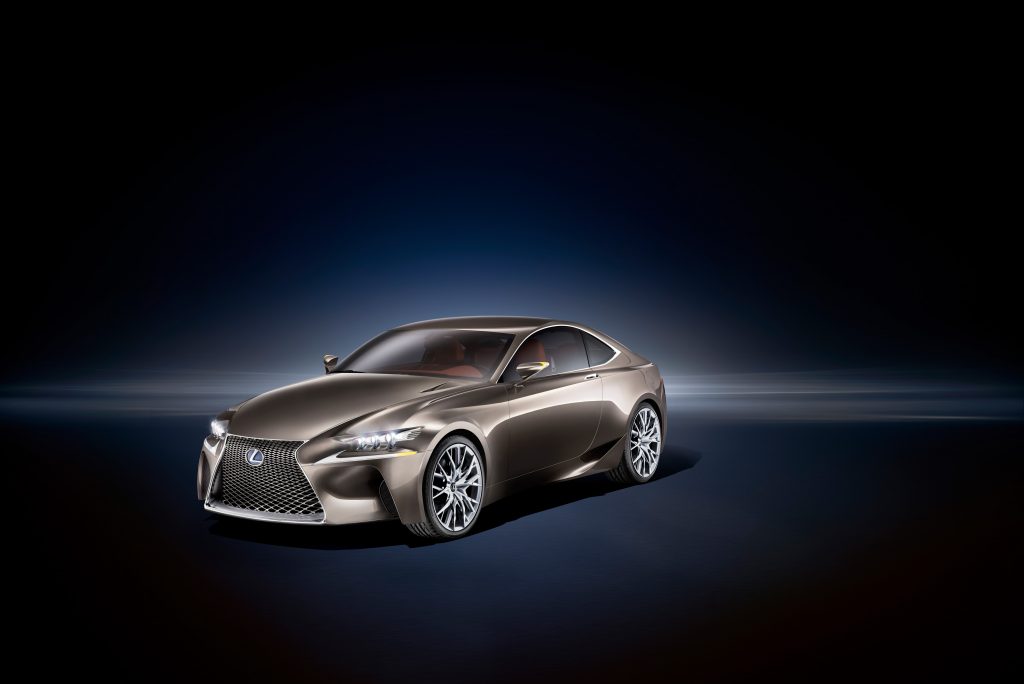 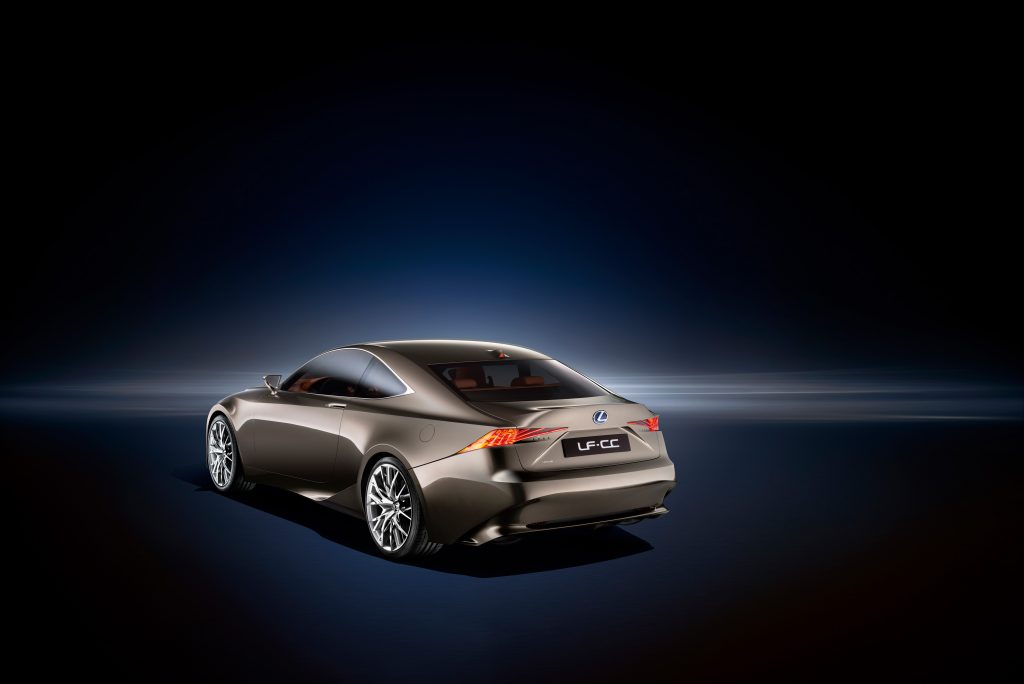 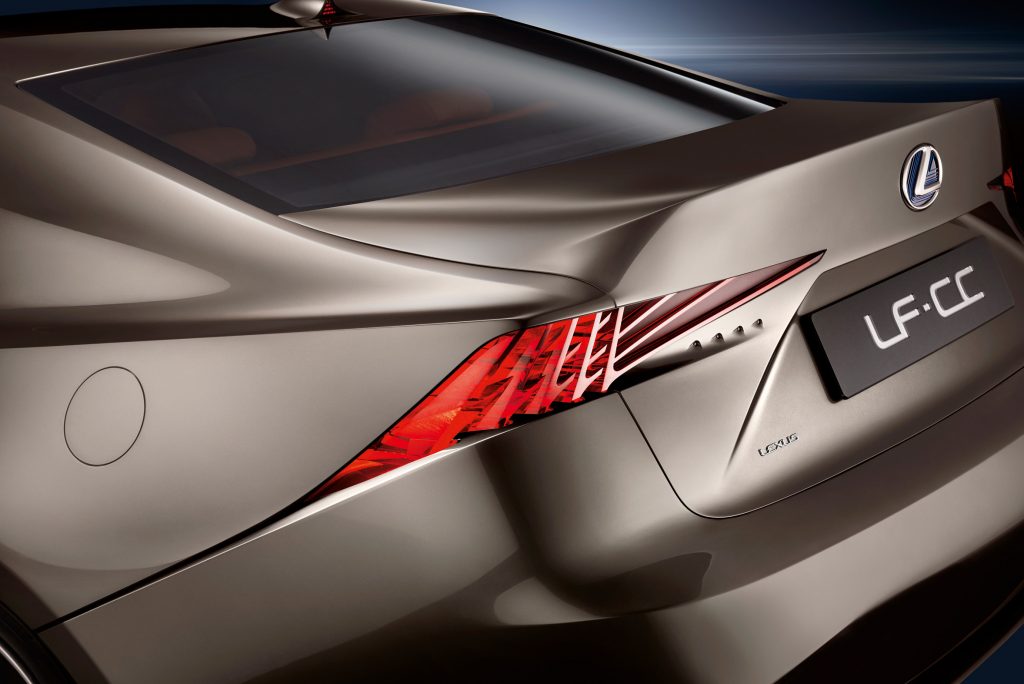 The LF-CC will also debut with an all-new 2.5L four-cylinder hybrid engine, which Lexus describes as such:

This powertrain will achieve class-leading energy efficiency, with more than 2 hp produced per gram of CO2.

It adopts the Atkinson cycle and D-4S direct injection technology to optimise both the power and fuel-efficiency benefits of Lexus Hybrid Drive.

(Please note, although the press release describes the LF-CC as a mid-size coupe concept, it specifies that the production model would be in the D-Segment, the same classification as the Lexus IS. The Lexus GS is classified as a E-Segment car in Europe.)

I’m still going over the images, and will post a more detailed analysis later today — for now, here’s the full press release.

Update: The original video featured in this post has been set to private and no longer viewable — I’ve added a new video as a replacement.

Update 2: The original video is back.

Announcing the launch of a premium mid-sized coupe in the more accessible D-segment in the near future, the LF-CC reinforces Lexus’ commitment to create more engaging, inspirational vehicles through attractive design, a superior driving experience and advanced technologies.

The LF-CC showcases the latest evolution of the company’s unique L-finesse design language, with the boldest yet interpretation of the signature Lexus ‘spindle’ grille. Framed by the bonnet lip, deep lower spoiler and powerfully projecting front fender tips, the grille mesh is encased in a deep, metal- finish surround and takes on a pronounced, 3D form.

A unique, 3 LED-projector headlamp design is housed in the narrow gap between the lower and upper fender surfaces, without a conventional, one-piece cover. Independent Daytime Running Lights (DRLs) are fully integrated into the upper bumper surface to complete this unique new design.

The broad lower fenders are aerodynamically sculpted to manage the flow of air to the engine bay and front brakes, whilst reinforcing the powerful, dynamic road presence of the new Lexus signature frontal design.

In profile, the powerful convex curve of the bonnet flows seamlessly through a steeply raked windscreen into a roofline which deliberately peaks towards the rear of the cabin to emphasise the traction available from the vehicle’s rear-wheel drive powertrain.

The bodywork is stretched tight between the front and rear fenders, and the rear fender is less pronounced than that of the front, reinforcing the concentration of vehicle weight over the driven wheels for maximum traction.

Further developing a design form initiated on the LF-LC concept and the high-performance LFA, the sharply sculpted form of an airflow regulating fin flows from underneath the side of the car and upwards through the rear wheel arch. This aerodynamic detail is designed to increase downforce over the driven wheels, further improving traction.

The airflow regulating fin merges with the falling roofline in a pronounced rear spoiler integrated within the boot lid, seamlessly fusing design and aerodynamic elements to give the vehicle its distinctive, coupe proportions.

The LF-CC is finished in a new, ‘Fluid Titanium’ exterior colour, a metallic finish with exceptionally high brilliance which combines sharp, bright highlighting with dark shaded surfaces to reinforce the powerful forms of the bodywork’s sculpted surfaces.

The LF-CC’s interior hints at the progressive luxury of a future Lexus model cabin layout, and represents a further development of the company’s HMI (Human Machine Interface) design philosophy.

The dashboard is divided into two distinct zones: an upper, Display Zone, with a multi-display screen located at an ideal distance for at-a-glance viewing, and a lower, Operation Zone, which allows access to the uniquely designed shift lever and an innovative touch tracer display for remote system control.

This clear division of zones creates a unique fusion of an airy, spacious cabin and a sporting cockpit which places the emphasis on a snug, highly focused driving environment. All functional driving components are consolidated in the driver’s seat surroundings, combining outstanding ergonomics with advanced HMI technologies.
The driver benefits from a low, highly focused driving position with a sporting, wide grip steering wheel, optimum pedal placement and high-visibility instrument dials. The touch tracer display for remote system control is located directly behind the shift lever for maximum comfort and ease of operation.

Coordinating with the ‘Fluid Titanium’ exterior colour, the seats, door panels and instrument binnacle hood are trimmed in a warm, elegant amber leather finish. The extensive use of metallic finishes and soft touch materials throughout reinforces the premium quality of the environment. The contrast between the exterior and interior colour schemes gives the car an elegant yet simultaneously sporting image.

Representing a new Lexus powertrain for future production, the LF-CC is equipped with an all-new, highly efficient, 2.5 litre full hybrid powertrain delivering a combination of the engaging performance appropriate to a sporting, D-segment coupe and low CO2 emissions, targeted below 100 g/km. This powertrain will achieve class-leading energy efficiency, with more than 2 hp produced per gram of CO2.

In addition to the petrol engine and electric motor, the LF-CC hybrid drive system further comprises a generator, a high-performance battery, a power split device which, via planetary reduction gears, combines and re-allocates power from the engine, electric motor and generator according to operational requirements, and a compact power control unit to govern the high speed interaction of the system components.

Adapted specifically for the hybrid powertrain, the all-new 2.5 litre, DOHC, 4-cylinder petrol engine benefits from several technical improvements. It adopts the Atkinson cycle and D-4S direct injection technology to optimise both the power and fuel-efficiency benefits of Lexus Hybrid Drive.

Lexus will introduce this new hybrid powertrain into its model range in the near future.

Lexus at the 2012 Paris Motor Show

Introduced by Paul Van der Burgh, Director Lexus Europe, the Lexus Press Conference will be held at 8.45 AM CET on September 27 (hall 4, stand 120).

First out side of the USA fuel is very expensive, In Germany at the moment a liter is 1,75 euro (8,67 USD a Gallon) so if the intention is to attract other countries then the USA to the brand they need to make economical motors and drive trains, realistically when can you use the V8 power of the ISF, rarely. The car is a work of beauty, I hope that it goes to production very close to what is the shown here. The LF-LC interior was exception, would rather see something similar as a production model. At first glance I would be in the dealership tomorrow, I hope that the new IS will have some similar overtones to this direction. Well done Lexus designer you are amongst the handful of makers at the moment with anything that is appealing to the eye.
Simply put:  "I'm in love".  I'd make a deposit on this car right now if everything remained the same for production (exterior/interior).  Even the concept's color is amazing. My engine change would would be either the 3.5 V6 coupled with AWD for the snow-belt or the powerful ISF V8.  A KERS push-top-pass type setup in the 2.5 hybrid would make it even more appealing - press release reads: "combines and re-allocates power from the engine, electric motor and generator according to operational requirements, and a compact power control unit to govern the high speed interaction of the system components".  Kudos Lexus on a handsome design.
Finally!!!!
coupe and sedan please and whats with the rear tail lights?
The side profile and dimensions of this car are perfect.  -The way the taillight "connects" to the scoop in front of the rear tire. -The rake of the windshield. -The little "kink" in the rear window glass -The position of the interior (far back with a long hood) An amazing concept.
"%$#@!" - Munich BD
Driving the NX 450h+