Shortly after the announcement that Lexus would debut a new concept car at this month’s Paris Motor Show, Leftlane News posted spy photos of what they claim is a camouflaged Lexus compact crossover.

The only problem with the theory? The mystery crossover strongly resembles a previously spotted Toyota RAV4 prototype (click for larger images): 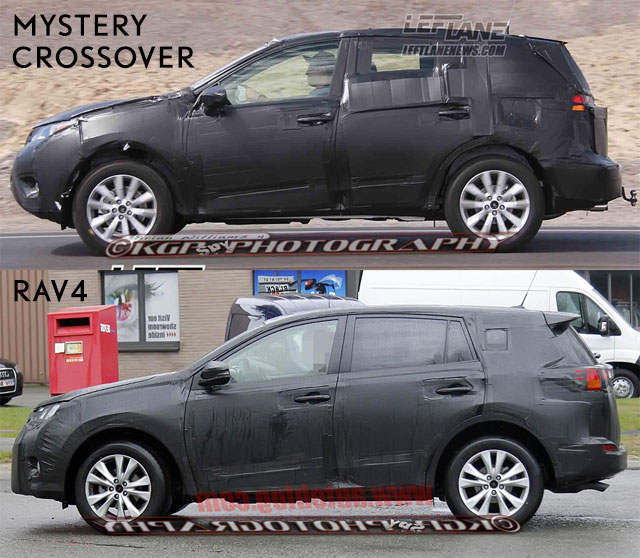 Despite the similarities, there are some noticeable differences:

Add in the fact that the mystery crossover was out testing with a Range Rover Evoque and an Audi Q3, and it makes for an interesting puzzle. One thing’s for sure, if Lexus was testing a compact crossover, there would be no better disguise than mirroring an already-photographed RAV4 prototype.

Same car , but almost different exterior .
If they are indeed launching a new crossover I believe it will be called an EX. Same chassis as the rav4 but with a Lexus touch. This will negate any need for an IS crossover thereby insuring the IS remains a standalone entry/sport car. You know what this means. They get to play with the rest of the sedan family. Testing craziness on the IS leaving looks to the GS and luxury for the LS. I can't wait to see the introduction of the IS. It's truly gonna be a beast. However, if they're actually testing a Lexus crossover then it's no longer a concept but an actual vehicle in development.

In the US, Infiniti already has a vehicle called the "EX".

I am pretty sure it is not the new Lexus.
It's been confirmed this is the USDM Rav4

I haven't seen this -- where was it confirmed?
On Clubexus  http://www.clublexus.com/forums/car-chat/333868-lexus-new-compact-suv-7.html
Strangely enough, the source CMK1 quotes in his post is James, a commenter on this website: http://lexusenthusiast.com/2012/09/07/new-lexus-concept-to-debut-at-paris-motor-show/#comment-645192113 Certainly a most reliable source -- after his comment, I almost didn't post this story, but there's just too much about this camo'd crossover that doesn't add up.
Sorry, I should know better than to 100% trust non-Lexus affiliates like Leftlane. Thankfully they have still presented something of interest though. Also thanks for posting this as despite what I've been told, one really can't be too sure. This CUV speculation has been out there for almost 5 years, so development wise such a vehicle should be 80% complete and entering testing soon. Unless it's on a bespoke platform, it would share with the RAV-4.
I take back what I said below and now disagree with the ignorant source spwolf who made a inane blanket judgment on a vehicle that hadn't been revealed. That is NOT a RAV4, due to the visible differences between the actual RAV4 prototypes and the vehicle above. James' and spwolf's opinions hold no water in this case.
I'm sorry, but if that confirmation came from CMK1, it was because I only trusted James, who appears to be wrong in this case.

The new CUV should base on the Mark-X Zio rather than the RAV4.  But if it is the case, expect at least 18-month away from the debut from this phase of development.
Noticeably smaller than the Honda CRV BD
Could be the Rav4 Hybrid.
I am pretty sure that we are looking at both RAV4 protos: one spotted in Europe (which is often with Belgian tax plates, running around TME Technical HQ near Brussels) and the other in the U.S. These cars on the pictures are way too similar and there is no way that a Lexus small crossover resembles that much a Toyota. The rear bumper difference is only a matter of camouflage, the rear view mirrors are just small things to mix up opinions...
That vehicle is exactly what Lexus needs at the moment. I was looking at market shares in Canada the other day and the X1 sells almost as much as they RX which means there's been people looking for that kind of vehicle for a while now. CX300h is my guess and perhaps a CX250 with a new or revised 4GR.
I disagree with the "Lexus" prototype being the RAV4 prototype.  Look at the rear length of the "Lexus" - it's noticeably shorter than the RAV4 and the roofline curves down a little more as well.  You can't camouflage a lower roofline as it's part of the shape/structure.  This is the Lexus CUV with some RAV4 camouflage to trick the public.

Its the perspective ... this is NOT a lexus - no spindle grill.  Look at all the other test mules - spindle grill was visible
Well prototype runs had Spindle Grilles, but test mules may have different engine parts/components under the Rav4 body, similar to how the new IS was running around with old body panels before prototype stage.
Exactly, we must continue to remember that a mule and a prototype are not interchangeable. A Lexus prototype looks much cleaner than a test mule and this U.S. tester is a total mess in comparison to the E.U. RAV-4 prototype. The LS TMG "mule" didn't have an obvious spindle grille, but the revised lower valance fascia accommodated the design of one. I'm sure by the end of next year we'll know plentifully about both vehicles.
Not true at all. I'm not sure why some struggle to realize that mules and prototypes are different. A prototype is 99% identical to the production model and a mule uses the predecessor's or current related model's external panels until the former is ready for road testing.

It could be the perspective playing tricks, but the front outline looks too wide to be a Lexus spindle grill. That, or Lexus potentially designed an extremely, ugly, gaping maw to be fitted to the front of their new CUV.
Lots of you guys are just glancing at pictures and commenting. Look carefully at these picture. You will notice that the 'Lexus' is smaller and has a slightly different shape. The rear lights are different and the front is different. Lexus probably disguised this as the Rav4 on purpose.

Or, because this 'Lexus' is based off a Toyota SUV, near identical exteriors are to be expected (Land Cruiser vs LX, Land Cruiser Prado vs GX). If this is a Lexus (and not a Toyota), then this is not being "disguised" as a Rav4. It is a Rav4, but with L badges, which is disappointing for me as a Lexus fan. I was hoping for more differentiation (Highlander vs RX).

Well, it wouldnt surprise me if it was just the Rav4, but I noticed that Toyota spent a lot more time on the camo this time around which makes me think even if just a Rav4 theres something else there. Using Lexus mirrors? thats new, dual exhausts on a Rav4 (could just be something they finally added) but hey maybe its just a mule! But I do agree the body panels are Rav4 I just want to know what they've got up their sleeve.
It could possibly be a Lexus with the dual exhaust, since there are rumors Toyota is dropping the V6 in the Rav4. And those wheels look more like Lexus wheels than Toyota's.
Actually I believe these are in fact the RAV4 the Lexus may look smaller but that's just because of the photo perspective, trust me this is the RAV4

No it isn't, simple as that. Too many have incorrectly assumed that, when that is not the case. Read the article and study the photos closer. There is an obvious difference between a mule prototype and PRODUCTION DESIGN prototype. It has nothing to do with being smaller, as none of the production RAV4's neither other Toyotas have door mounted mirrors like Lexus models do. The body panels and coverings are too ill-fitted to be a production prototype.