The 2013 Lexus LS debuted earlier this week in San Francisco, and while I did post live updates from the event, I also want to share some photos and early impressions of the new Lexus flagship sedan.

There were three LS vehicles on display — let’s start with the center of attraction, a Liquid Platinum LS F SPORT: 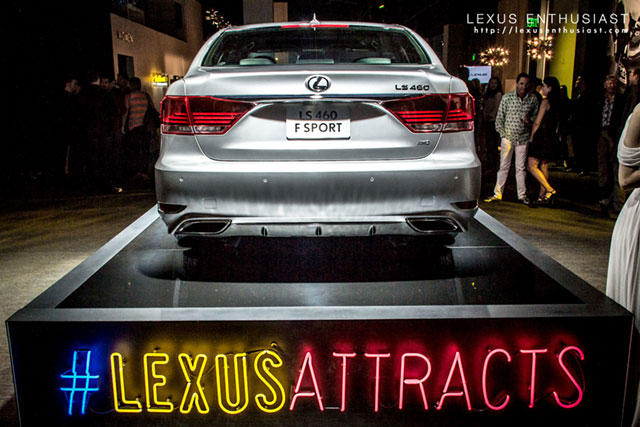 A packed party is hardly the best time for critical automotive analysis, but there were a few design elements that immediately grabbed my attention — let’s start with the massive mesh spindle grille: 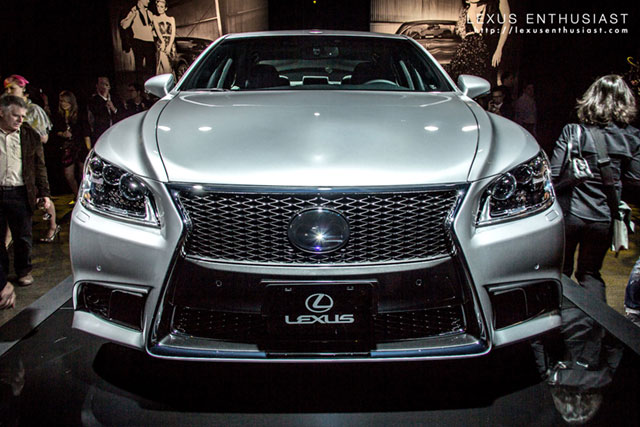 The LS F SPORT may be the most aggressive Lexus grille ever, but it’s also perfectly balanced and full of style — easily the best interpretation of the spindle grille yet.

The headlights deserve a closer look as well: 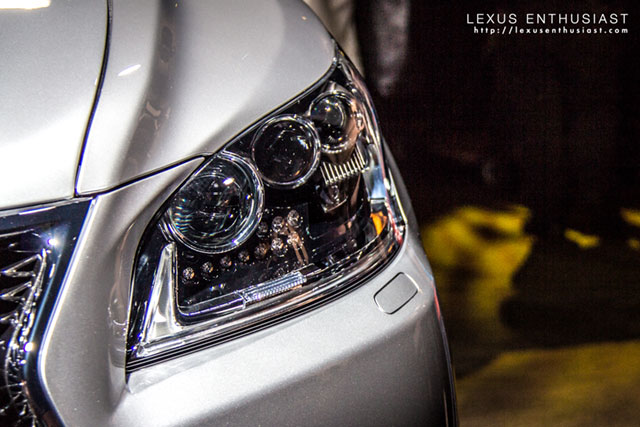 Without question, the new LS has the most intricate headlights I’ve ever seen — the level of detail is astonishing, looking more like the revealed inner workings of some future laser gun. 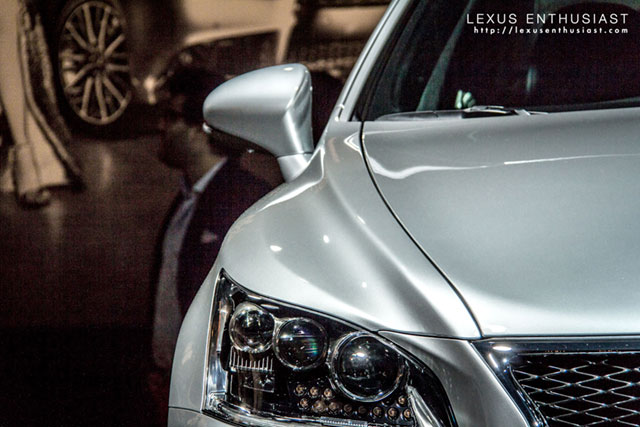 The fender now breaks and builds like a wave, and add a muscular, chiseled appearance. It may be a stretch, but these folds remind me of the LF-LC concept.

Central to the LS launch event were photos of four celebrity couples posing alongside a LS F SPORT — taken by photographer Ellen von Unwerth, here are the photos in full:

Parked outside on the balcony was an Ultra White LS 460 F SPORT, and it was the best looking LS there: 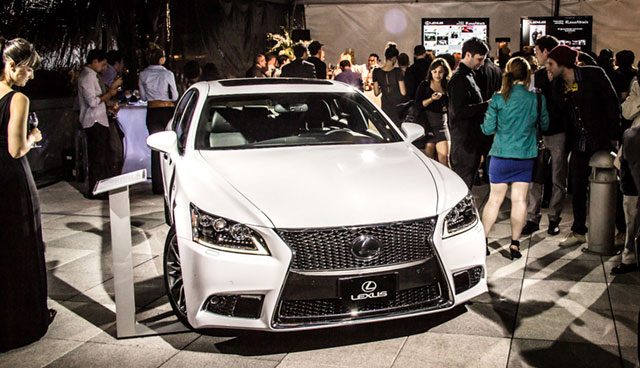 Exclusive to the LS F SPORT, the Ultra White exterior is ultra bright, and makes the mesh grille stand out even more — definitely a bold color.

Finally, there was a Liquid Platinum LS 600hL, which I sat in briefly: 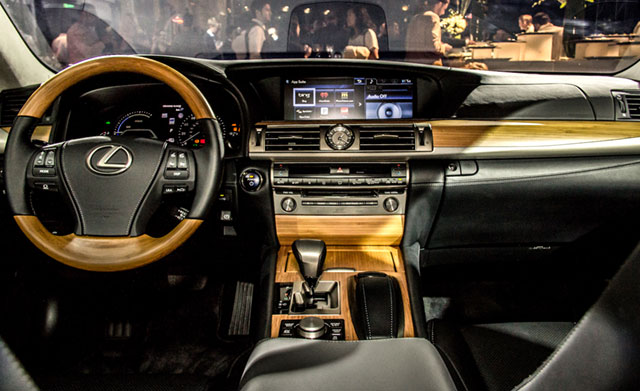 My time inside was limited to less than five minutes, but I can say the new Lexus interior design language works well in the LS. I was especially impressed with the materials — everything had a buttery soft texture, and felt much more luxurious than the current model.

Also had a chance to play with the all-LED headlights and taillights: 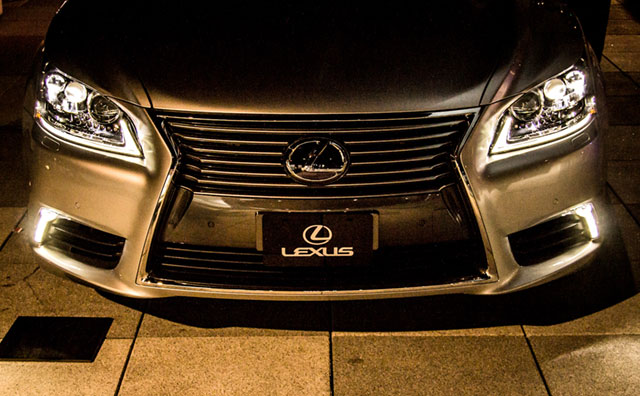 All in all, it was a very fun night in San Francisco. My initial impressions of the 2013 LS were extremely positive. While related to the current model, the new LS stands as a major evolutionary change — the exterior now has a multi-faceted, sharpened appearance that bumps up the presence of the vehicle significantly, and the interior adds an additional layer of luxury onto functional & modern design first seen in the GS.

Of course, there’s only so much you can learn about a car at a party, but let’s open it up — any questions about the new LS exterior or interior? Leave a comment and I’ll do my best to find an answer.

Special thanks to Lexus, who arranged my flight and accommodations for this trip.

My first thoughts a few days ago was that the face lift might show the cars age,rather than disguise it,but I've changed my mind having studied photos some more. I really like it now,and fully agree that this is the best spindle grille thus far. In the current line-up an LS 600h F Sport would be my second choice after the intoxicating GS 450h F Sport which I had the indescribable pleasure of driving for a second time yesterday. With this fresh-up the LS has a new lease on life.

I'm an LS man through and through, and I fell hard for this car. I tried to temper my reactions in my article, and I have yet to drive it -- however, this car is already at the top of my list.

Are those real metal finishings inside, especially the gear knob?

I know the gear shift is aluminum, but I don't know about the Drive Mode Select knob. I would imagine it's all metal.

I always found the latest gen LS to still look good despite its design dating back to '07. Where it began to show its age and conservatism was on the front-end.  No more!  The new facade makes such a statement in pictures, I can only imagine how much better it will be to see it in my rear view mirror. Absolutely love it and I will be hard pressed to find anyone make mention that Lexus is bland. In my opinion, the extensive refresh will keep the LS fresh for a good 3 more years probably in time for the next gen LS. One item I'm not convinced of yet is the bamboo interior on the 600h L. Probably looks great in person though once you see the detail and refinement... Is the dash leather and on which LS models?Another item I questioned was the F Sport wheels. At first, I felt the thin multi-spoke design looked too conservative for the sporting nature, but the closeup shots show how gorgeous the finish and design is and how well-suited they really are for the car. They're growing on me, fast.Since you played around with the exterior lighting, my question is how does the exterior lighting turn on? Is what we see in the Lexus video accurate or special effects? Is there a sequence, fade-in,  vs all instantaneously on? And as far as headlamp design goes, any insight as to whether the base LS will get a two-projector headlamp design and is it halogen vs HID, vs LED in the NA market? Finally, any comments on tactile feel of the controls, dash, console, seats, etc.?

Let's see: * The bamboo has a great feel and has a very nice pattern, but the contrast with the black leather was a bit much for me. * I know the dash of the GS is NuLuxe, but don't know about the LS -- I'll get an answer on that next week. * Not sure about the exterior lighting sequence, but I imagine the video is accurate.  * Pretty sure the base LS will get HIDs. * I really wanted to describe the interior as a "giant leather cotton ball", but didn't want to gross anyone out. My time was limited, but two things that stood out: 1) The leather of the seats is so soft, it feels like suede, and 2) All of the controls had a heavier, more solid feel than the GS.

I can see how the F-Sport grille can offend some.  I'm not diggin' it in white, for example.  It's too much in that color. But the standard grille could use more press.  Lexus seems to have focused on the F-Sport, and needs to promote both grilles. On sale date is October 1 for the 2013 LS and November 1 for the F-Sport, right? BD

Agree about the F SPORT getting most of the press -- especially when I prefer the standard model. We'll have to wait until the press launch before really getting a sense of what the big picture is, but my sense is that Lexus wants to get away from the massive generational shifts and move to a more incremental cycle -- changes every three years, alternating between technology and design. The F SPORT is November, don't remember seeing anything about the standard LS.
I think when Motor Trend wasn't bashing the new ES, they said the LS would come in October.  I would assume the 1st or the 15th, since the fiscal year starts on the 1st.... BD
We'll know soon enough. :-)

Is there a place with NVH scores?

Nothing that I've seen so far, but here's a quote you may be interested in: Class-leading quietness is exemplified in the front seats by the lowest levels of engine noise amongst the new flagship’s rivals, and in the rear seats by a level of conversation clarity which now rates at almost 100% when the new Lexus is travelling at 100 km/h.
Thanks! I also read you last post about the EU sports model feeding engine sound into the cabin... Would like to know the db difference if u could.. If u ever do find, please post, would love to compare figures :)
I've made a note and will follow up when I get the details. :-)
I couldn't get specific NVH numbers for you, but the new LS is definitely quieter -- check out my overview for more details: http://lexusenthusiast.com/2012/08/11/2013-lexus-ls-preview/
The LS has always had leading NVH This one will push the envelope

Thank's for the eye candy krew..!

My pleasure, as always.

Facade is the right word. It's just a facelift. I am ready for the All New LS. What quietly irks me is that we all know that Lexus has something in the works that is going to blow us away. Like the LFA and the LF-LC. So instead of blessing us with the new LS, they retool some of their manufacturing machines to tweak the 'old'. Giving it suppposed new life to live. Well, I'm not buying that idea for one second!

Not to be an apologist, but Lexus has done more than just "retool some of their manufacturing machines to tweak the 'old'". I also think it's a little early to make any final decisions -- no one's even driven the car yet. :-)
is the mpg same as last models? If it is I'm a tad bit disappointed.
MPG is the same -- sorry to be the bearer of bad news!

A new video about it , if you interested , http://www.youtube.com/watch?v=gyz1kCFemf0

Very nice and informative video. Thanks for posting.
Great video -- writing up a post right now.

The white fsport stand out the most but since this is a full size luxury car, I think I will take the liquid platinum LS. All your detailed shots are great and you make the bamboo trim look really nice. Way better than the pictures that were release few days ago. Can wait to see it real life

Personally, I would be very tempted by a Nebula Gray Pearl LS F SPORT -- the Grey would minimize the aggressive look of the F SPORT package. Also, can't wait to see the LS F SPORT in black. That said, I like the front grille and interior better in the standard LS.

I am not sure that grill flows with the rest of the car.  Love the back end. Reminds me of the Audi "big mouth" grill.

But Lexus one looks much better . XD
While I feel like Lexus went their own way with the LS, the car now has the presence of the A8 & S Class -- especially with the big bold spindle grille. Always felt the LS should stand out more, and now it's probably the most aggressive looking flagship sedan available.

I really do like the evolutionary path they've taken, but I wonder why they didn't just do a full LCD for the instrument panel, that seems to be the logical path, that the industry is taken as seen in the upcoming s-class ...
Does it look intimidating in real life?
Are internal dimensions the same as the old car?
My first LS was an 02 430, followed by an 05 430, and I presently have an 09 460, my best yet.  Initially, I was a little uncomfortable with the interior of the 13, but after watching the information given here, I have gained a new appreciation for it.  The time, process, attention, correction, obsession with detail remains impressive.  I can tell, I'm going to want one.....  I am an LS convert.
This LS has raised the bar for all luxury flagship sedans. Its presence on the road is so strong and it screams wealth and power. This vehicle is for sure on the top of my luxury flagship sedan list.