Earlier this month at the New York Auto Show, I had an opportunity to sit down with Mark Templin, Group vice-president & general manager of Lexus USA, to talk about his recent promotion to general manager of the global Lexus Product and Marketing Planning Division.

Kevin: Hi Mark, thanks for taking the time to meet with me. My first question is about your new position — could you tell us about it?

Mark Templin: Sure. In addition to my role here in the US, I’m going to be the General Manager of the global Lexus Product and Marketing Planning Division, so I’ll take the role that Karl Schlicht had concurrently with the role here.

I’ll spend a week to ten days a month in Japan, then a few days flying to other global markets for different business. I’ll spend the other half of my time here in the US.

So you’ll be able to go into your new position bringing a North American perspective, and shape the brand more directly. I’m curious — do you see this as balancing North American needs with the global market, or will you be streamlining the lineup?

You know, I’ve just started this role, but I’ve already done some travelling — I was in China and talked to our dealers, and have talked with our distributors in other parts of the world, and I think there’s a lot more common ground than most people think.

Of course, there’s different size engines, right? The Chinese market, for instance, want the same kinds of cars that we offer here in North America, but they want them with small engines. Their best selling car is the ES 240 with a 2.4L engine, and the 2.7L RX is the big seller for them. As time goes by, they will continue to get big cars and small engines.

And my understanding is that they want everything long wheelbase…

Yes, absolutely. It’s really popular for brands to partner with Chinese manufacturers and build long wheelbase versions of cars that they don’t sell anywhere else in the world.

That’s a benefit of the new ES. With the longer wheelbase and much larger back seat, it’s good for their market.

The ES was also the fourth best selling luxury car in China last year, so that’s a good starting point as well. 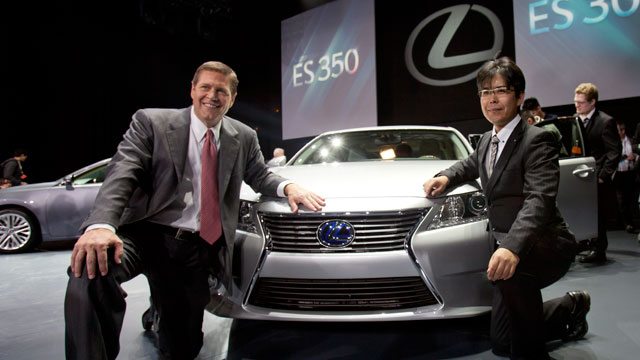 Now, this is a broad question, but what do you see the biggest challenge to grow the global Lexus brand? Is it just a matter of time?

We have a lot of good ideas about how we can accelerate the process, but it is going to take time. Often people will ask about our volume relative to our competitors on a global basis, and I don’t really think it’s a fair comparison.

There really is a lack of perspective. With my site, I try to cover the brand globally, and I’m really interested in these new emerging markets. I don’t want to classify Europe as an emerging market, but..

For our brand, it is, basically.

…it’s an interesting time for Lexus.

Even Europe, where our volume isn’t big, we see good potential in the future. In the past, we didn’t have the right products to compete in that marketplace. We don’t have small cars, we don’t have diesels. But we’ve become a real hybrid powerhouse in Europe, and other brands are starting to follow, other brands are rolling out their own versions of hybrids.

Now that we’ll have eight hybrids in our lineup in less than two years, I think we’ll continue to succeed in that way.

And now they don’t sell gas engines in a lot of the European markets.

That’s right, in many European markets we’ve become a hybrid brand because of CO2 requirements, you either have to have diesel or you need hybrid. Diesel has worked pretty good in Europe, but it’s not translating into the US market. But hybrids are starting to translate to Europe.

Give us time to expand our hybrid lineup, get better CO2 levels, and products that match the marketplace, and I think we can succeed there in a big way. There will be faster growth in places like China, of course…

Where basically everything is new.

Even with my audience, only 49% are American. At least from my perspective, Lexus really is a global brand. 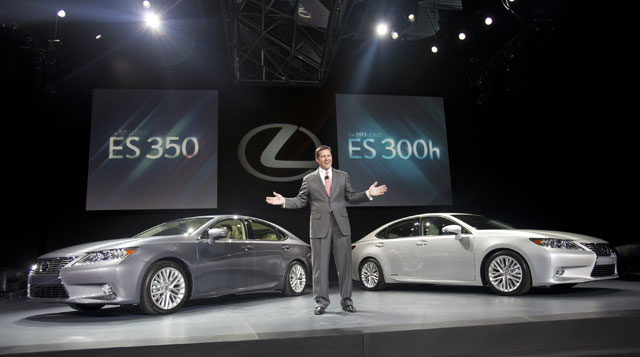 Shifting gears, I’m wondering about the reasoning behind making the new ES larger — was that to put some distance between the ES & GS?

It really came around as a result of many things, but the two big ones were that consumers were asking for more space in the back seat of their cars. It’s a great car for taking people in the back seat — more legroom is always a positive, it’s really an industry trend right now. If you look around the [New York auto] show, you’re seeing a lot of brands stretching wheelbases to get more interior space.

It was also a big benefit to markets like China, where they have lots of people riding in the backseats.

And you’re doing a right hand drive, correct? Maybe we’ll see it in a market like Australia?

We haven’t announced where we’re going to sell it yet, but there’s huge potential in a lot of markets where we haven’t offered it because we didn’t have right-hand drive.

So we will launch this year in left-hand drive markets, and it will be a big seller for us — we have over 1,000,000 ES customers on the road who love the brand, love the dealers, love their cars, and I think we’ll be very successful with them.

Then next year, we’ll launch in select right-hand drive markets.

One final question — how do you decide which vehicles debut at which autoshow? Is that dictated by your product timeline or does the venue come into play?

It’s a complicated process, it’s a global process. In my new role, one of the things we’ll do is make those types of decisions. The decisions come about because of timing, trying to space them out with all the major shows around the globe, so that we have news in different markets. This was the global reveal of the ES, but we will do other reveals in Europe, and shows in Tokyo, China, so that we can try to balance the global roles of the product.

Some products are better to launch in some markets than others — we want to make sure that we hit certain shows here in the US. Detroit, New York, Chicago, and LA are the four big ones here. Paris and Geneva and Frankfurt are big in Europe, Shanghai is big now, Beijing, and Tokyo of course.

Thanks for your time, Mark.

Always good to hear from Mark...... BD
Thanks for the interview Kevin! Mark dropped some really interesting news like the new ES entering new markets where it has never been before, more hybrids in a short-medium period of time and of course his new position as the global Lexus Product and Marketing Planning Division.
Thanks for publishing the interview with Mark Templin ... good reading ! A question i would like to have asked is why Lexus hasn't optioned the LX with a diesel engine particuarly in markets like Europe and Australia .. mmm !

Because the 5.7 is king of the hill
The twin-turbo charged 4.5 v8 diesel as found in the Landcruiser in some markets throughout the world including Australia is a much more torquer yet more fuel efficent unit then the 5.7 V8 petrol. According to the Lexus Australia website - the LX570 produces 530nm at 3200rpm (270kw at 5600rpm) with a ADR fuel consumption of 14.8 L/100km. According to the Toyota Australia website, a Landcruiser powered by the twin-turbo charged 4.5 V8 diesel produces a whooping 650nm at a very low 1600rpm (195kw at 3400 rpm) with an ADR fuel rating of 10.3 L/100km I know what engine i would much prefer especially when hauling / towing heavy loads.
Europeans don't really like trucks, so that's mainly why they didn't introduce the LX, GX.

Thanks for that interview Kevin! It is a really good one....with questions i like to read and hear about. Looks like Lexus starts to offer more engines for differnet market places. Small engines for Europe i think....and more hybrid options for every model. Means to me that e.g. the new LS will come with a V6 engine for China (LS 350L? ) and a smaller hybrid powertrain for Europe (LS 450h?).
Diesel LX will be a good seller.
That's right! BIGGER IS BETTER! I'm glad to see that the trend has returned!
His family/personal life must ridiculously hard being gone at least half of the month. Wow.

Yeah, that's another I've been asking myself. Mark spends so much time traveling around the world that he might just see his family twice a month. This just show us how much Mark is focused on making Lexus more and more global.
But don't you fell bad for his family not being able to see him most of the time!

Thank you Krew this was great.  I also think in Canada, like China we appreciate smaller engines. A RX270 and ES240 would do well.
Driving the NX 450h+