As strange as it seems, Lexus has posted a photo on Twitter of a mystery vehicle hanging in the air from a crane:

It’s on a crane and under a cover. What is this masked machine?

Considering the ES is debuting next Tuesday at the New York International Auto Show, I’d say it’s a safe bet to be the masked machine under the blue tarp — in fact, I wouldn’t be surprised if this is the ES being delivered to the Javits Center for its unveiling next week.

(The car’s identity notwithstanding, how about those LFA-inspired wheels? So awesome.) 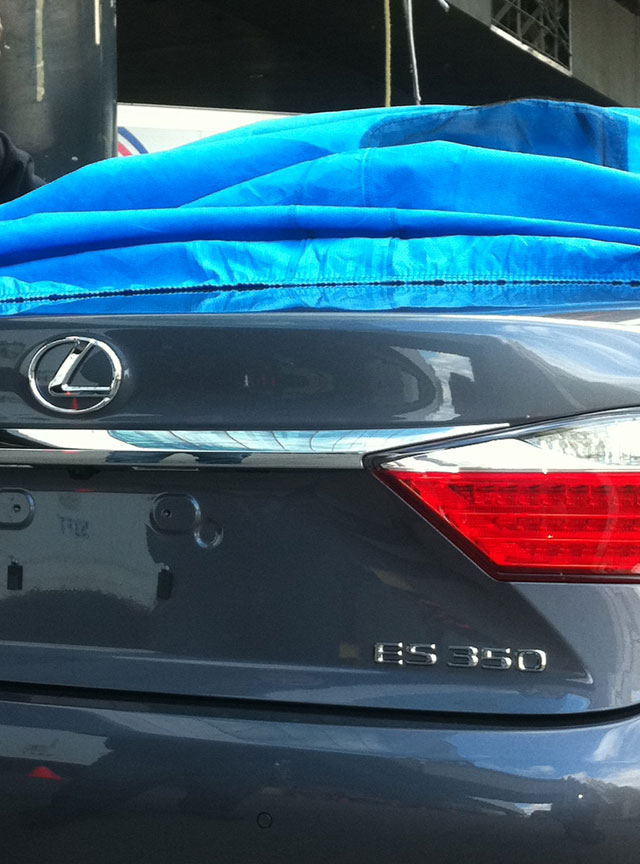 If this is indeed the specific ES that will be on display next week at NYIAS, it’s a great debut color.

I sure hope you're right! Or GS Hybrid?

Good question, moreover, GS450h recently started its production in Japan so they might just getting it ready for the auto show.

Nice!
Nice catch! Do we have the source?
Well that answers our question....Good job !   I think the new ES will bust all sales records yet.
Love this color -- where's the photo from?
Follow the trail... ;) https://www.facebook.com/mcgrathlexusofchicago

Is that the ES? Look at the lights...
Ofcourse, it is the ES
Just look the front door's line , that only happens on the FF car .

What about the door??
The door line is very close to the front wheels , that won't happens on anything FR ... so , it's clear that this would be a ES (because it's long too) . That also explained , why FF car have bigger cabin space with the same length .
Yeah FFcars have more interior space due to no driveshaft connecting to rear, transverse engine.. It's a more compact & light setup.. Not to mention FF has no inertia power loss and a car accelerates quicker.. Also easier to perform wheelspin!

ES F-Sport or ESh
has lexus forgotten about the gx? like isnt the gx going to get a spindle grille?

Next spring.
it's going to be hard to put a spindle grill on the GX (i dont like them on SUVs anyway) because it doesnt have the regular lexus trapizoid grill

That's the Hudson River and the Jersey shoreline in the background...... BD
Wow, not bad.
Isn't that exterior color the now-ubiquitous Nebula Gray Pearl?

I would think so, but the blue tarp is reflecting and confusing my color-blind eyes. :-)