Lexus has announced that the all-new sixth-generation ES will debut next week at the New York Auto Show — a teaser image was also released (click for a large version):

This cropped look at the new ES headlight confirm the leaked photos we last month out of China: 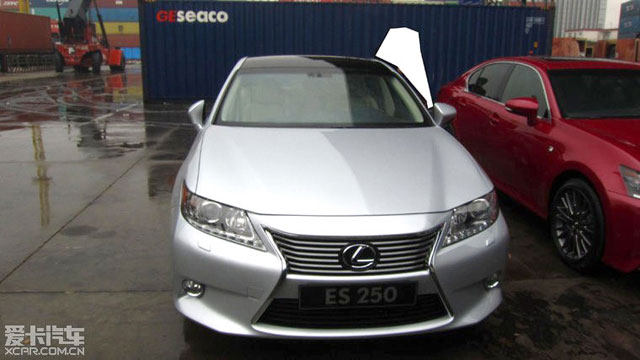 As for the details of the ES debut, here’s a quote from the press release:

The Lexus press conference will take place on Wednesday, April 4th at 11:20 a.m. EDT at the New York International Auto Show. It will be on display in the Lexus exhibit from April 6-15, 2012.

I’ll be in attendance at the NY Auto Show to bring you live updates & photos — very excited to see this new ES in person.

It might be just me, but I don't actually like the "gap" between the spindle grille and the hood. Anyway, I'm very excited to see its debut, I'll enjoy your live coverage Kevin!

That bothers me a bit too. It looks really awkward on just about any brand that has it, but it does give the grille a cleaner look.
I agree Jake - the line breaks the shape of the hood - it's pointless - why is it there - it would look much better if there was no gap/line  - that would ensure a longer hood shape - which would look more elongated and elegant
I never like to judge a car from cell phone photos, but I'm not really sure about this hood line either. I'll be sure to take plenty of photos so we can get a real look at it (and the rest of the car as well).

I'm not feeling the gap either but I'll wait to judge until tsome real Pictures come out and I see it in person.
I like everything but that hoodline.  That's a swing and a miss...... BD
I 3rd that. The gap between the grille and hood is pretty chunky. Waiting to see more high quality pictures with different angles. I want to see if the lighting will make a difference then we shall cast judgement.
Yep, I'm with you guys. The fact that the hood doesn't stretch down to the grille smacks of penny-pinching. The nose looks like an add-on. Needs sorting now.

I can guarantee that nothing will be sorted this close to production start.
TBH, the Chinese leaked photos pretty much show the production model so I don't expect any late adjustments for neither the spindle grille nor the gap between the hood and the grille.
Agree with Jake & Thomas -- what's done is done.

I love it! Kind of agree with the whole gap thing too; I also dont really love the fog light design. Its looks good on the RX because its in SUV/Crossover. I feel for a sedan it needs a little more like the GS has.
eh, I'm not a fan, The interior is what gets me from the leaked images...
Hope the press photos will show the ES in black, it might conceal the gap altogether.
Just to see . . . I did a little adjusting . . .

Much smoother and definitely better flow----one thing it will do is keep each and every model a bit unique in it's recognition.  The overall smooth design may be saved for the new generation Flagship LS which of course we want to be the best of the line-up,
Much better. That gap completely destroys the flow the smoothnes of this car. It makes the spindle grille look like it was added aftermarket.
Nice work! I'm really holding out on a final judgement until I see the new ES in person -- I've been burned too many times by judging a car by cell phone photos on the Internet.

This is absolutely atrocious. Not sleek or elegant by any means.
much better - that is more like it - nice job!!
I'm scared that the Toyota Avalon, also being introduced in NYC, may be the better looker of the two; may take away sales... I know it is all Toyota money, but the ES is their big seller.
The way the taillights are designed and the way the hood pops over the grille, this new ES looks similar to the 4th generation ES. I like it. The headlamps look crazy with all those gears.
The line break is a killer for this car and a deal breaker for me (no pun intended). I may sit out this generation or look somewhere else.
Personally I only like the spindle grill on the GS F sport
That gap on the hood looks real bad !!! Didn't the designer see it, or are they trying to save money?
I'm going to have to look at the C class now! that hood is messed up, waited forever for the new ES to come out and they mucked up the lines of the car.

I wouldn't judge the car solely on these cellphone camera shots -- just wait until the car debuts at the NY Auto Show this week.

Tomorrow's the day! When will your live coverage begin Kevin?