Twelve hours after Road & Track leaked a low-resolution video revealing the LF-LC concept set to debut at January’s Detroit Auto Show, Lexus has released a much clearer photo of the 2+2 coupe (click for a larger version):

From this unique angle, the concept’s resemblance to the LFA is undeniable, so much so that a comparison is in order — unfortunately, there’s no LFA photo that I’ve found that works exactly, so let’s just go with a side view: 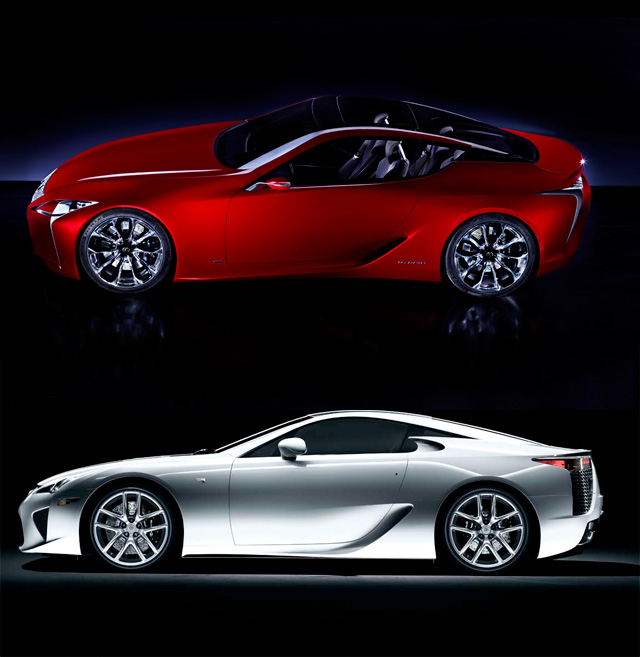 The most obvious shared design is in the lower rear intake, which is cribbed directly from the LFA, but even the general profile is similar, despite the fact that the LF-LC has two rear seats. The silver edges that highlight the front and rear are also reminiscent of the Lexus supercar.

Despite their similarities, there’s still plenty about this new concept that’s unique — the roof deserves some special attention:

There’s an element of the roof design seen on the 2007 Toyota FT-HS concept, but in the case of the LF-LC, the all-glass roof appears to be in the traditional targa-style, with the top-most panel removed rather than folded in. Appearances, of course, are very deceiving.

Alongside the hybrid badge, there’s also a second mystery badge that’s indecipherable no matter how much photoshopping I do:

As excited as I am about the LF-LC as a concept, I’ve already started to consider how this will transfer to a production model — but first, here’s a quote from the Lexus press release:

“Crafted from a clean sheet of paper at the request of Lexus headquarters in Japan, the LF-LC blends both high technology and organic shapes to connect the driver to the machine,” said Mark Templin, Lexus group vice president and general manager. “The clean lines of the vehicle emphasize motion, creating a distinctive look for this futuristic sport coupe.”

Conceived as a design exercise to explore the future of Lexus design, the LF-LC was created at the company’s Calty design studio in Newport Beach, Calif.

My eyes immediately caught on the words “design exercise”, which would suggest there’s no immediate production plans — however, a quick read over the LF-Gh press release shows the same sort of phrasing, describing the GS concept as an “exercise” in design, even though it was released as production model just four months later.

So what is the LF-LC, and what does it mean for the Lexus lineup? It’s difficult to say, especially when there’s only one leaked video and three teaser images — however, if this concept is directly related to an upcoming production model, we could be looking at a car that can truly bridge the gap between the LFA and the rest of the lineup.

Wow. She's beautiful.
LEXUS means business right now and I highly doubt this will go wasted for several years.....I look for production in 2013.  This is truly a mark that as you say KREW that it would bridge the very wide gap between the LFA and the rest of the line-up.....LEXUS needs the SC-LC in it respect and flow of Luxury vehicles....I see many of the SC driving around in mint condition and they do command a presence all their own....a certain class and timeless, ageless beauty......no matter what anyone says negatively about that previous generation and design.

Speaking of timeless,ageless beauty & the LFA,Motor Authority just compiled their top 25 auto images of 2011 & guess who claimed top spot?The fact that the LFA was chosen as #1 out of 25 vehicles speaks volumes about how it has stood up against everything out there despite other brand loyalists trying to knock it down.Just to put things into perspective,the Lamborghini Aventador LP700-4 claimed the #20 spot.
BTW,I already uploaded this hi-res image as my new desk top.Just thought I'd share this if anybody wants to do the same.It looks like this LFA is about to jump out of my screen.Simply gorgeous!

My mistake for saying that this concept had a scooped out section instead of a targa top in an earlier post.The picture I looked at earlier was a little grainy & the edge of the glass in that picture,I just passed off as being the inside of the(non existant)B pillar.there also appears to be a badge on the passenger side of the dash in the interior.I noticed it a couple of days ago,but was still unable to make it out after blowing it up.I guess,even now,there's still lots of unknowns & things to speculate on.
That looks awesome
If this were sub-$100k car with an engine as lively as the LFA's and an exhaust note as sheering as the LFA's... Oh man...
Great side-by-side comparison with the LFA. I think the second badge might be saying "plug-in". Although only the first three letters look to say that, it makes sense and it's about time Lexus gets a plug-in hybrid too.

I agree. It looks to say plug in the little black thing on it looks like a plug as well.
Would be a good idea to put this one on the market with plug-in technology...  I remember having seen some pics on the web of a modified LFA showing a plug-in thing on the front side...
I bet this is where the collaboration between Toyota and Tesla will start to show itself.
You're right. It may be a stretch to say but maybe that plug in LFA was just a mule for this car? Who knows.

This would make a perfect Porsche 911 competitor... small 2+2 Targa. Krew, an even closer side by side comparison would be this concept and the LF-A Concept II... they both have that tear-drop-esque design cue at the headlamps; and has softer, rounded edges.
I fully expect this to be released after the LS redesign in early 2013 (Lexus has beyond a full plate next year) A $65k 6-series/CLK competitor, it will inherit the hybrid engine from the GS450h (you didn't think that would only show up in one Lexus vehicle, did you?) The V8 that will debut in the 2014 LS should be offered as the top model for $75-80k BD

BTW, you can tell this has convertible written all over it! The new and abused SL will have a fight on it's hands in 2-3 years BD
Very nice post even i would say that whole blog is awesome. I keep learning new things every day from post like these. Good stuff!

The guys on this blog are great.I joined them less than a year ago when I got fed up with the inmaturity & uneducated minds on other sites.I found it very welcoming to have some like minded company instead of the bickering & hating of other sites,some of them of long standing magazines.Makes me think that some of them have lost their way & sense of purpose.

I'm already in love with this car! I know some people have said that they hope this will be a convertible but I hope it stays as a hard-top because I love the metallic strip that runs across the roofline and the panoramic glass roof.
Wow she is so nice! And expencive!(
That is amazing. I absolutely love it!
This looks very promising.  Perfect SC replacement sometime soon I hope..... with the retractable panoramic roof similar to Porsche 911 Targa would be a bonus in production form.  I strongly recommend that Lexus should stick to the 2+2 seating much like previous SC models.   I won't mind having the 3.5LV6 hybrid from GS450h as powertrain ... however, could lexus come up with a paddleshifting 8-spd Auto from the IS-F would be a must....the CVT is just inadequate for such high performance sport coupe.
BTW, for those who were wondering what was that second badge: It's Calty's logos. It says "Calty Design"

wow! Cool car!
Wow, what a beauty!!!  Love the roof  lines.
Thank you for sharing this article. I love it. Keep on writing this type of great stuff.
Driving the NX 450h+