Lexus has released a second teaser of the new concept set to debut at the Detroit Auto Show in January — this time, it’s a sneak peek at the interior (click for a much, much larger version): 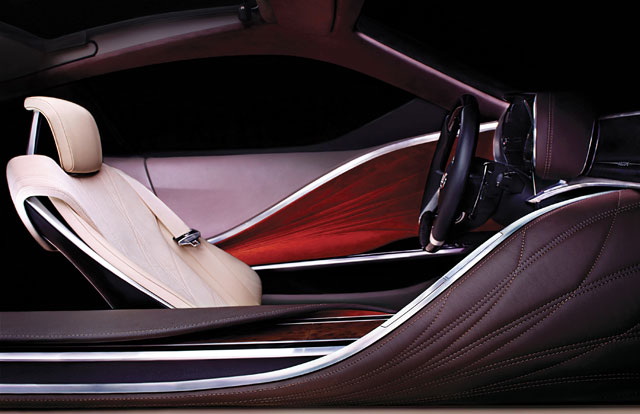 While the first teaser image made it difficult to guess what the concept might be, this new image paints a much clearer picture — the leatherwork sculpted around the center console, the walnut wood trim, and the high level of detail throughout the cabin all point to a next-generation Lexus SC.

Should this be the case, there’s other takeaways from this single image — most obviously, judging from the front seat placement and the slope of the roof, it’s almost certainly a coupe, and although I can’t account for the inset “track” attached to the open roof, it doesn’t appear to be a convertible.

I’m sure I’ve missed plenty of details, so it’s time to open it up for comments — but before I do, here’s the new teaser image as a desktop wallpaper: 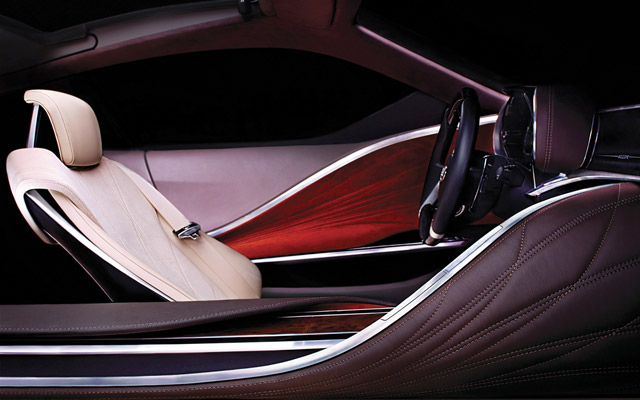 (Just a note, the poll to guess what this new concept is will close tonight, so don’t forget to vote if you haven’t already — though this new image should make your choice a lot easier.) 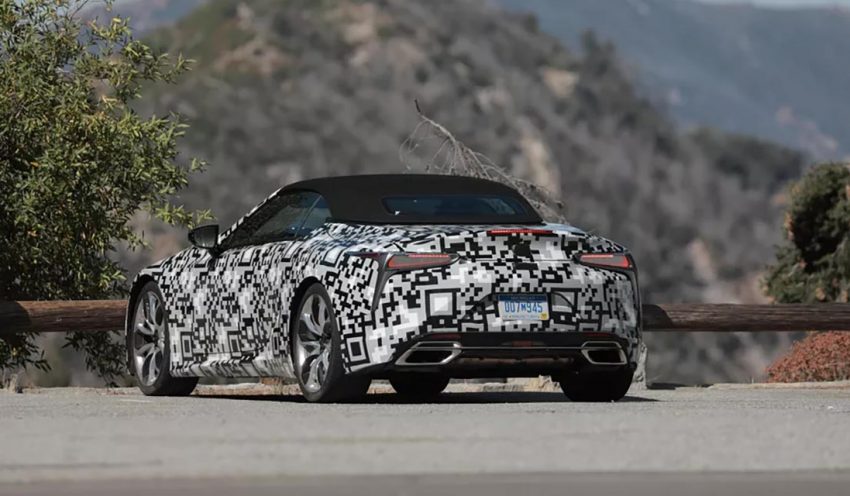 It really doesnt need to be a car lexus is planning on building. Neither a new IS or a new SC. It could just be a concept, as in a concept without further plans. Often car makers do this just to get publicity and to test reactions.

I suppose that could be true, but I don't know if Lexus has the luxury of releasing concepts that don't translate into production vehicles this year -- remember, there's been a promise of nine new or updated models.
True. But on the other hand, this concept looks too "wild" to be seen as a near production ready car. I dont see this interior as something that could be put into production in the near future, I see it as something futuristic. Same with the front shot. The Lf-Gh concept remember, was a lot more down to earth and beleivable imo. But who knows...
Agreed, the interior is especially over-the-top, but I would think this concept would be closer to the LF-Ch->CT 200h. Truth is, I look at this photo and all I see is the SC -- it's just at the right level of luxury and sportiness, and fits exactly into my own expectations for the model.
Lexus LF-Ch & Lexus LF-Xh was both wild ... but they also turn into the Lexus that we saw , the Concept have to be wild or it would be boring .
I hear that there are currently no plans for production of this concept.  So unfortunately that would mean we wouldn't be seeing a production version for several years, if ever, though i remain optimistic.  If it does make it to production, i would guess it would be around 2016-17.
How often do teaser image cars NOT turn into real production cars? I'm not asking to be contradictory; I'm genuinely curious. It doesn't happen very often does it?

i am pretty sure it is IS-Coupe
I am very very very sure this is Lexus Supra!!! look at the teaser, then look at the interior and then look at  http://www.digitaltrends.com/photogalleries/toyota-toys-with-the-idea-of-resurrecting-supra-sportscar/

Great observation... the unusual roof opening in the Lexus Concept interior picture seams to match the Supra Concept; not a full convertible... more like a drop-targa-top.
Me too...er...a Lexus SC & Toyota Supra anyways.Just look at the drivers oriented cockpit.(driver focused like the 4th gen Supra & FT-HS Concept)Also there's a curved joint line at the back of the sun roof which to me suggests(maybe)a 2+2 coupe(with sun roof open or closed)with the option of fully opening the roof to reveal a scooped out section & convert to a 2 passenger coupe just like the FT-HS Concept.(I hope)
Really liking this line of thinking -- going to dig up some details about the FT-HS, I'm a little rusty.
Awesome! Thank you!!!
I agree. I was just about to make a similar comment. The sweeping part of the centre console is present-- albeit very different-- in both models. And, yes, the open top might explain the rails. From Toyota.com's "concept vehicles" section: "The FT-HS's interior features create a dedicated driver's cockpit that includes a cross-car instrument panel structure and delta-wing driver pod. An integrated instrument panel surrounds the driver, creating an enclosed pod effect. Armrests flow seamlessly into the door and surrounding interior. Seating is optimized for a lightweight appearance and function: The seating accommodates four and then converts to a two-seater when the roof retracts."

First I thought about Lexus- version of GT 86, but this really may be some kind of new Lexus-Supra :) AWESOME!!!!
the wheel size gives it away, why would a GT86 power car need a 265/35R21 tyre
Lexus Netherlands calls it the LF-LC http://blog.lexus.nl/tag/lf-lc/
Looks like a coupe from the inside.  fingers are crossed for a new SC.
Interior looks totally pimp Hope it's not that old coupe concept with the receding hairline....... BD
Updated my post for clarity -- meant to say that it's obviously a coupe, and that it didn't look like a convertible.
Please, please a new SC would be awesome!
Sweet! And LOOK! Lots of leather and wood! Let's hope the actual car is the same!

The roof reminds me of the way the Toyota FT-HS Concept's operates.
my point exactly
Mine too!!!

Surely, you're joking. Haha.
I think the leather is fine, but it really needs more stitching
You guys are killing me.
Seriously though,it's nice that the passenger has some nice details to look at too in this driver oriented coupe.Much better than the GT-R's dash/transmission tunnel.(too plain)

how about an LS Coupe?
This looks pretty awesome
According to Lexus Netherlands it's an entirely new model.
It have a long roof , longer than SC can have ...
ooooh.... nice. I wanna live there :)
If we examine the interior carefully, this concept doesn't have the elongated, horizontally-swooped-style dash as found in the 2013 GS. Instead, the centre console has a sense of LFA-ness. It sort of flows downward with the screen at the top and the remote touch at the bottom. So I think it is going to be a toned down version of the LFA. Perhaps it could be a new sports car or maybe the revival of the beloved SC. The wood flare on the door looks sensational. The seats could be a bit more supportive and the panoramic moonroof is a great touch. Looking forward to it!
I have been an Lexus's model user for all my life and they never failed me. Loved the design, this is a great car!
If Lexus had an interior like that... Bentley would be shitting bricks.