Two weeks ago, I was invited to test drive the all-new 2013 Lexus GS in Dana Point, California. This is the third part of my review -— here’s part one and part two.

So far, my review of the 2013 Lexus GS has covered the mechanical improvements and examined the new exterior styling, so today, let’s look at largest leap forward compared to the previous model — the interior.

Right from the first glance, this is clearly not just a simple massaging of the existing cabin, but a full-scale redesign that brings major changes in design and functionality.

There’s a saying that “simplicity is the ultimate sophistication”, and this certainly applies to the GS’ new interior styling, with its clean, airy feel: 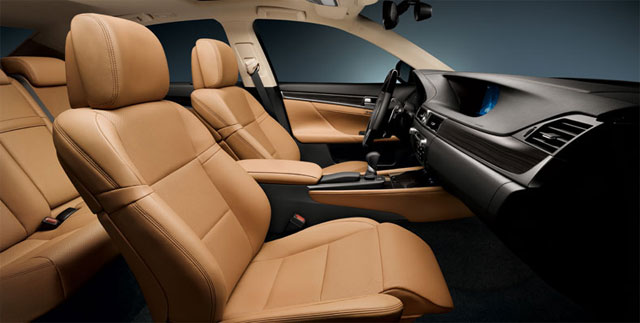 All the materials have upgraded, with large areas on the dash newly covered in NuLuxe, to the point that it reminds me of the LS: 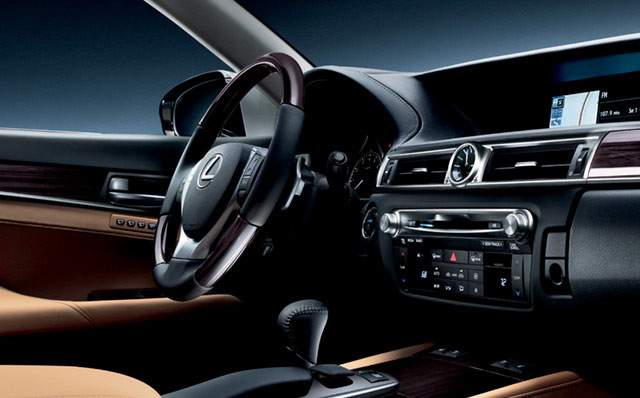 As a point of reference, here are the available color combinations: 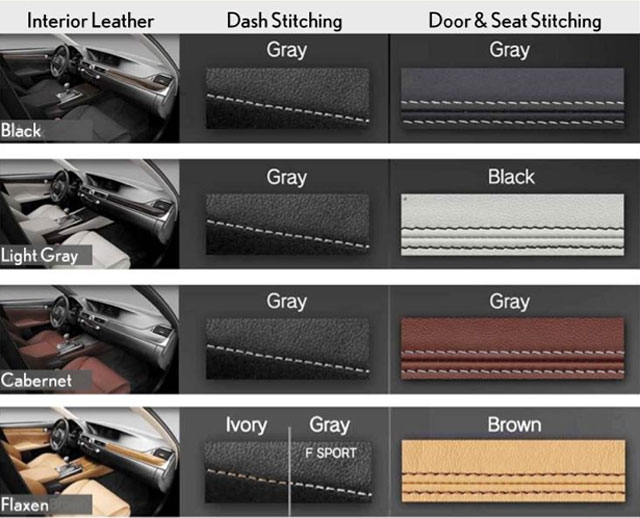 (Just a reminder, the Cabernet Red is only available with the F Sport model, . Update: Saddle Tan is not available in North America.)

Jumping to the new technology in the GS cabin, there’s only one place to start — the giant high resolution 12.3″ Information Display built into the dash: 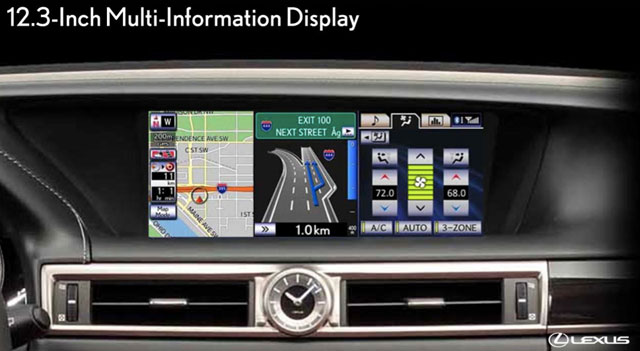 In order to best utilize the horizontal space, the display is divided in half during most operations, with the main task showing up on the left and secondary controls for the audio system, climate control and fuel economy monitoring locked to the right. This is an excellent use of space, and really packs in the available features.

But even more important than the display itself is the new software — along with the usual navigation and audio menus, Lexus has stepped into the “app market” with their Enform 2.0 system: 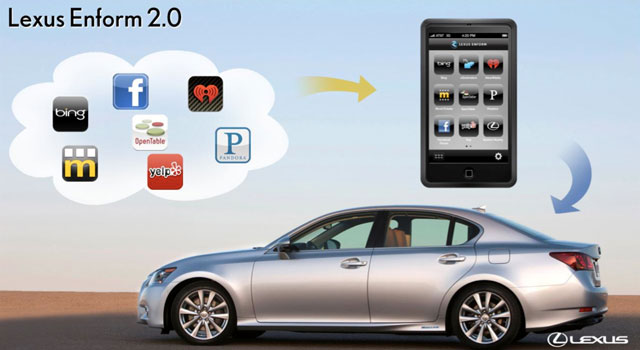 The new GS will be able to connect with seven web services:

In the beginning, functionality will be limited to a subset of the features available from these websites, but here’s where it gets even better — apps can be updated by smartphone, and won’t require visiting the dealership. This allows for a much more flexible experience, including the possibility of more apps in the future.

Another improvement is with the Remote Touch controller — after debuting in the 2010 RX and appearing in both the HS & CT, it will getting an update in the GS, moving from a trackball interface to something more like a standard mouse: 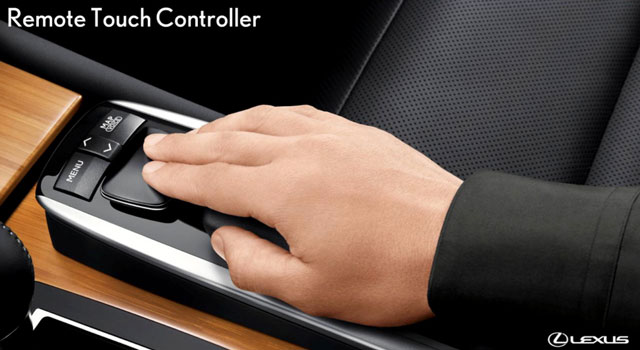 Of special note is the removal of the ENTER buttons — instead, clicking down on the controller is now used to interact with the system.

Continuing on, Lexus has also reworked the turn signals, employing the BMW-style function where the stalk doesn’t lock in place, but rather returns to the center: 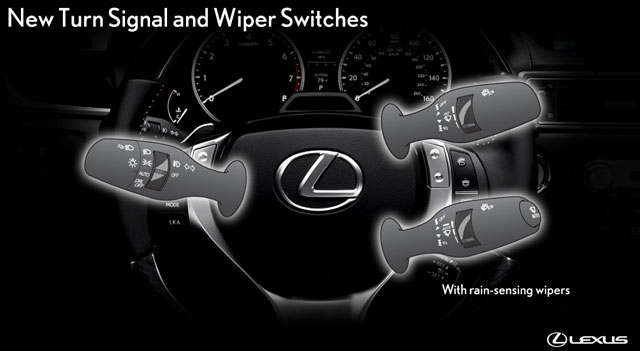 The new GS also adopts Lexus’ Heads Up Display (HUD) as an option — here are the various panel selections:

(The HUD is also where the new night vision system will be located, though details on that option were sparse.)

One last thing to mention is the interior LED mood lighting: 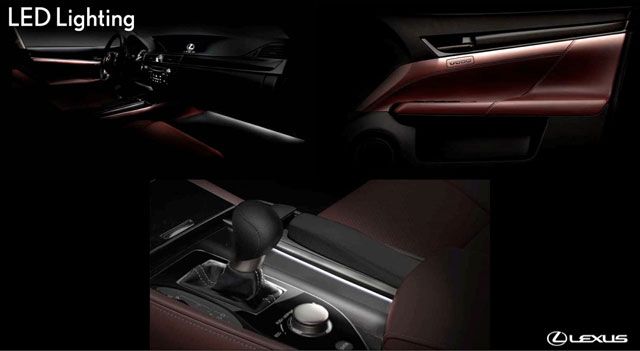 I made sure to sneak out at night and experience this lighting for myself, and details like the LED strip hidden under the door trim gives the interior such an upscale feel — just beautifully done.

With that, I conclude the “just the facts” portion of my GS review — next up, it’s time to get into my driving impressions and share some of the photos I took, starting with the GS 350.

Update: A couple corrections — the dashboard is covered with NuLuxe (a synthetic leather material), not Leather, and the Saddle Tan interior color is not available in North America.

Nice! Lexus has addressed many of its customers' wants!
Love the interior light but hate the wiper/indicator stalk ...

Yeah, not a fan myself.
Yeah... That part should not have been brought over from BMW. At least the new stalks aren't identical to Toyota models, I think.
you're right, they aren't identical to Toyota, and that's a good thing. overall i love the new GS and its interiour, no BMW, Audi or Mercedes could stand up to it. Drove the competion's models (new 5 series, E-classe and A6), can't wait to drive the new GS.
So far , no other Toyota use it yet ... or maybe it's used on Crown Majesta ; but the wiper/indicator stalk is just my problem , I like new stuff but not that stalk .

...it will getting an update in the GS...
REally nice inner sloon!
Are saddle tan and flaxen the same colors??

I believe Saddle Tan is darker, I've attached an image of the color in the LS Sport.

A couple corrections -- the dashboard is not covered with NuLuxe (a synthetic leather material), not Leather, and the *Saddle Tan* interior color is not available in North America.

Thank you very much!! You just made my day:)!! I'm from europe and I have LS 460, but i'm hopin'g to get the new GS next year with the taxen interior.
Love the car, hate that type of indicator stalk though, drives me nuts
Simply stunning interior.. They' have seriously managed to blend typical Lexus luxury and sportiness together.. And the result? A stunning interior.. This car shall do good
Every time I look at it the more I like it
i hope lexus crash interpreter don't with rador satellite
do we have rear seat accomodation specs yet? i am a realtor and would like to know how big the back seat is.

If you get the F-package, can you get the wood trim for the dashboard??
they think the lexus rear end is bland? the audi design hasnt changed in ages. It looked good the first time, but now its just an led light show with the same big grille. not saying their cars dont look nice, they do but if u call the lexus rear end bland, u cant call the a6 striking, new, or exciting..
I ... still wanted White . :P
There are 2 LFA's currently for sale on Ebay.A black one with 400 miles & a white one with 45 miles on it-both with red interior.If I had the finances right now,one of them would be SOLD,SOLD,SOLD!
Good overview. BTW it's "Head Up Display" not "HeadS Up Display", unless you have two heads. Head up is the position of your head while you're driving. Heads up is what you say to your friend before a baseball unexpectedly hits him.
i want to know if the f-sport can come with all the wood??
Driving the NX 450h+