Two weeks ago, I was invited to test drive the all-new 2013 Lexus GS in Dana Point, California. This is the second part of my review — part one can be found here.

Moving on from all the technical talk, it’s time to take a closer look at the major changes to the exterior design of the next-generation Lexus GS.

Now, as the new “face” of the Lexus brand, there’s no question that the spindle grille is the most significant design change overall, but there’s something else that I believe is much more important to the GS model.

Let’s compare the side profile of the third-generation GS and the new fourth-generation GS, with attention on where the back window meets the trunk: 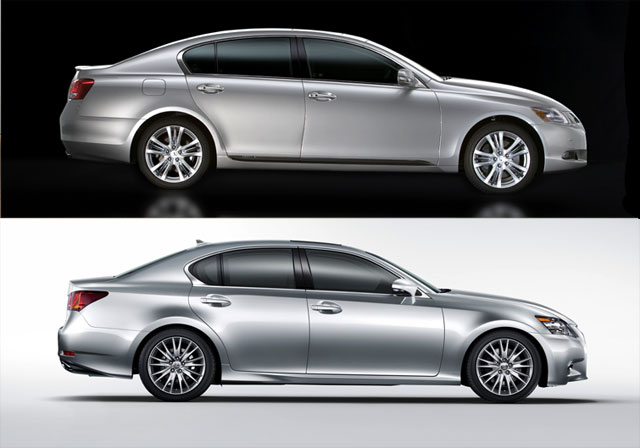 The change is subtle, but meaningful — by moving the roofline forward, Lexus engineers were able to increase headroom in the rear seats and space in the trunk, and perhaps even more importantly, gives the GS a more conventional shape.

The family resemblance is important — the GS no longer feels separate from the rest of the Lexus lineup, and instead fits in perfectly as the mid-size model between the IS & LS. This in turn gives the GS a much clearer identity, and solves perhaps my biggest issue with the previous model.

Of course, the new spindle grille and the entire front-end remains the exterior design highlight: 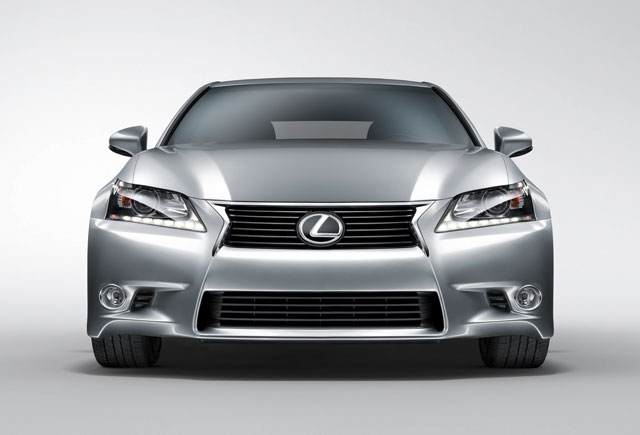 Being the vanguard for a new design direction is a tough job for any vehicle, and this is second time in a row that the GS has been called on to do exactly that — first, with the entire L-Finesse design language in 2005, and now with the new front-end design that will make its way through the entire Lexus lineup in short order.

As with almost anything new, judgements have been quick and ruthless, but I have two points to temper all the controversy. First off, as someone that writes about Lexus all day every day, I’ve been staring at this new front grille for three months now, and my initial trepidation has been replaced with an appreciation of the direction Lexus designers are taking — essentially, it takes time to get comfortable with something new.

I feel confident saying this because of one very important fact — the new GS, and especially the front end, looks sooooo much better in person. Photos appear to sharpen the front-end to a point, whereas in real life the car has a strong, wide stance (likely from the extra two inches in width) that puts the entire design into proportion.

All of this results is an exterior that has a way of growing in its appeal and sets a new tone for the brand — exactly what you want with a design that will dictate the lineup’s look for the foreseeable future. In fact, a recent comment from Lexus Europe’s vice president Andy Pfeiffenberger sums it up perfectly for me:

“We’ve been vanilla long enough. If some buyers don’t like the new GS’s design, that means we’re doing the right thing.”

To close out the exterior design talk, there’s one minor element I wanted to point out — there’s these two fins on the rear tail lights that help direct the air around the rear of the vehicle: 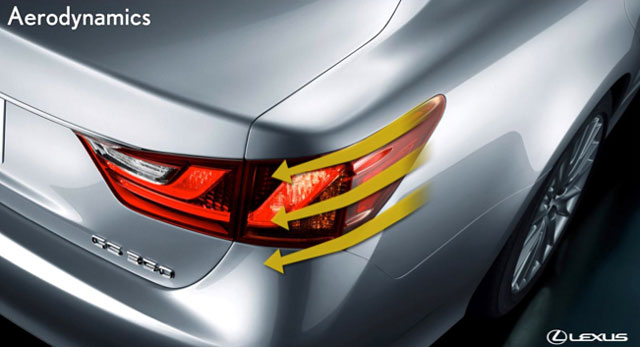 I love these little details that Lexus engineers work into their designs — they always end up being my favorite elements of the vehicle.

Up next: The all new GS interior.

Keep them coming Krew! I would be the sort of person who could listen and converse with an engineer or designer all day long!
Sufficiently Pimp BD
It looks not new at all, just the combination of the old GS and LS, Make another new design please.
The fins on the tail lights.........Mercedes introduced that 20 years ago.

No, not 20 but over 40. It was first introduced with the W115.
Mercedes had fins for aerodynamic enhencments on a cars with aerodynamics of a brick? Oh really?
A lot of cars had them for quite a while, but a lot of them were only trying. (=
I didn't mean to suggest this was something that had never been done before, but rather that it's the type of detail that I always look for with a Lexus.

Yeah this car looks very nice, I can't wait to see it in person.. In USA this segment is the main segment where the Germans dominate.. If Lexus sells more then e-class & 5 series then Lexus will be better then ever next year..

Lexus expects about 24k sales a year, about half of what BMW and Mercedes expect But about twice what Audi and Infiniti takeBD
Yeah I'm guessing that is the minimum amount they expect to sell.. Assuming its cheaper then the 5 series & E-class, I don't see a reason why it won't outsell both of thm..

I will have to view the vehicle directly before deciding on the design. I purchased a GS 450h when it appeared. I since traded it for an RX450h. I'm most interested in changes to the hybrid system and in trunk space.

the trunk space on  the base model is 14.3 cu. ft. the hybrid battery is now placed more vertical which will lead to more trunk spce in the hybrid.

I like the exterior especially the F sport version,  My only grip is no fog lights...  Has there been any talk on pricing? :D What about MPG?

I'll be breaking down each model's specs this week.
But no pricing info just yet -- I was told mid-December.
fog lamps have been removed on the fsport model because there is really no calling for fog lamps on a sport model. on the base model the mpg is 19/28 (rwd) and 19/26 (awd).