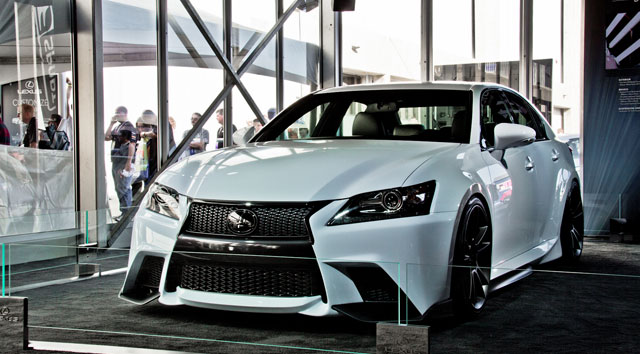 After a weekend of recuperating, I’m ready to share a selection of photos from last week’s trip to SEMA in Las Vegas, where Lexus debuted the all-new 2013 GS 350 F Sport and a host of tuned vehicles. 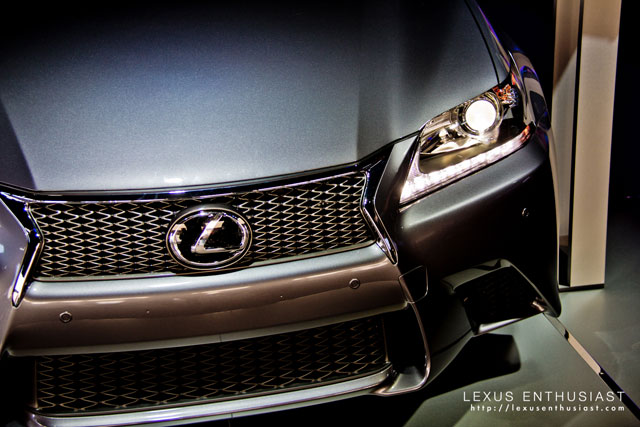 Even though I’ve yet to see all the various color combinations, I’m pretty sure the Nebula Pearl Gray and Cabernet Red GS F Sport is going to be the one to beat — it just looks that good, even though the red interior is super-difficult to photograph (hence only one interior photo, and that’s of the aluminum trim). 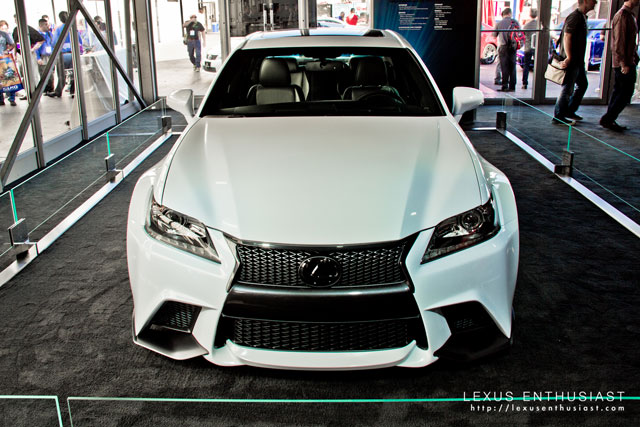 In comparison to previous Five Axis project cars, the Project GS is almost subdued — the results, however, are just as impressive as anything that’s come out of Troy Sumitomo’s shop.

Just like the production GS, much of the Project GS’s focus is on the front-end, where the giant under-bumper wings and blacked-out front bumper boost up the aggression — but it’s probably the side-skirt work that I liked the most. Very nicely done. 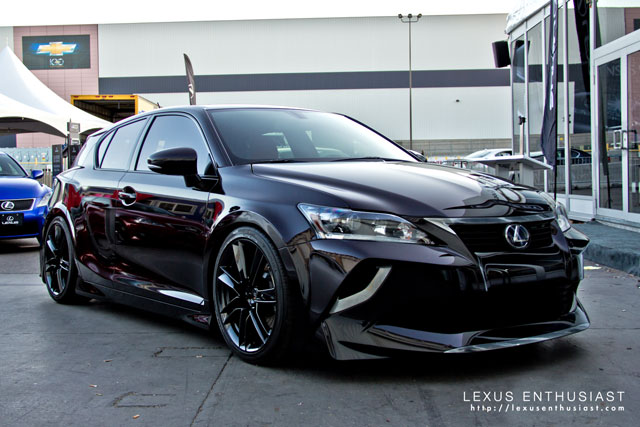 Although it debuted early this year at the Chicago Auto Show, this was my first time seeing the Project CT in person, and it did not disappoint. The sharp curves and angles are out of this world — to the point that it looks more like a tiny spaceship than a CT project car. 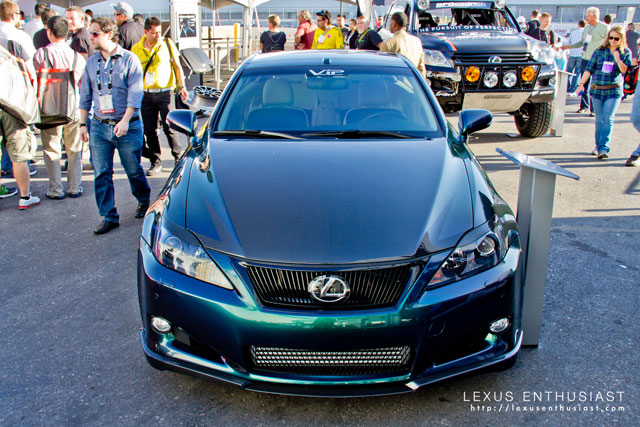 The first thing you notice about the tuned Lexus IS 350C from VIP Auto Salon is the paint, which shifts colors in multiple ways and multiple angles — it never stays the same. From there, the other modifications that tuner Clark Ishihara worked into the design come into focus — the carbon fiber hood, the classy two-tone interior — forming a complete package that really looked great out in the Vegas sun. 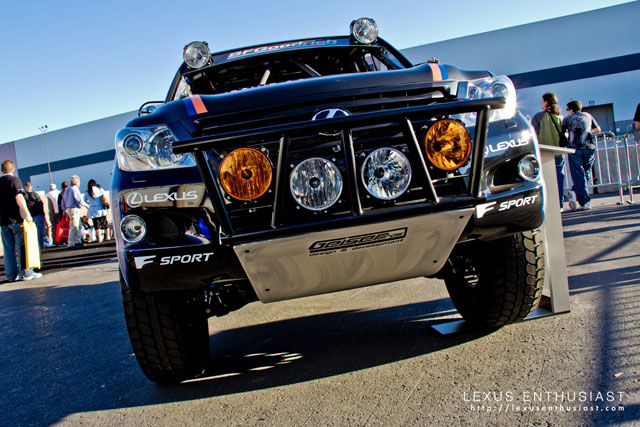 Joe Bacal’s new Lexus LX racer is intimidating — this massive machine casts an imposing shadow over everything around it, and out of all the vehicles at the Lexus display, THIS is the one I wanted to drive the most.

SEMA has come to mean a lot to Lexus — this is most clearly illustrated by the GS F Sport’s global debut — but even so, the brand is lucky to have such a clearly talented stable of tuners. Joe Bacal, Five Axis & VIP Auto Salon put their hearts into these vehicles on display, and I couldn’t have been more impressed by their work. Well done!

This car looks very cool! designers and developers are great!writing service
rly cool ) pretty design ! looks powerful !!!!!
GS fiveaxis concept for GS-F!!! :)
HI I  HAVE 2007  GS 350 , TRY TAKING THE ENGINE OUT OF THE LS 600   460 HP KEET THE SIX SPEED ,  ADD NIGHT VIS . AND PRE COLLISION SYSTEM, SPORT S AND SPORT PLUS , ECO  NORMAL DRIVE WITH A SETTING FOR AWD & RWD, ADADITIVE VARIABLE SUSPENION, I PUT A HEAD UP DISPLAY IN MY CAR ALSO THINK ABOUT GS  F  COUPE  460, HP PLUS HYBID FOR MORE POWER .  ALSO ADD PAR  PARKING .   I THINK THIS CAR CAN BE DONE YOU HAVE THE PARTS TO MAKE  THIS WILL KEEP  PRICE LOWER , BECACUSE LS 600 ENGINE ALREADY  MADE, LEXUS WHAT DO YOU THINK, ALSO CAN YOU MAKE ONE FOR ME  .TRIE 245 FRONT 275 REAR 18TEENS I AM IN NC , THANK THING . THIS CAR IF PRICE RIGHT MANY POEPLE WILL WANT . I KNOW   MARVIN    .ER
เซ็งหวะ อีแก้ว กรมทรัพยฯ ไม่ยอมให้เย็ดซักทีหมดเงินกับอีนี่ไปเป็นหมื่น แดกข้าวแม่งไม่เคยควักซักบาท อีดอดทองจังไร
Lexus, a great product line and these pictures make me dream more can own a Lexus so.