Just two days before its official unveiling, the 2013 Lexus GS has been spotted without camouflage by Chinese spy photographers — let’s start with the front: 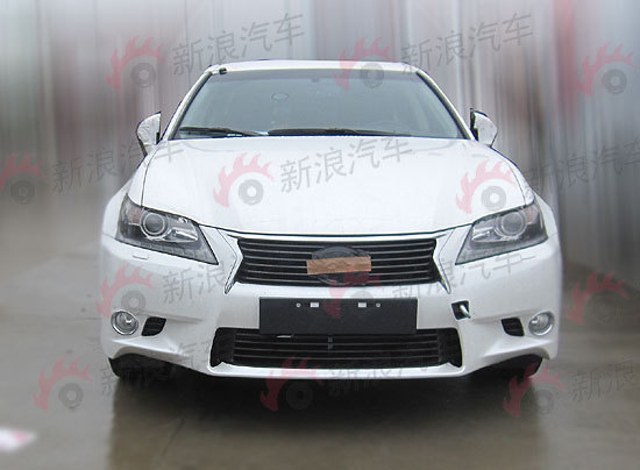 Due to the brightened teaser image we saw last week, there’s not too much in the front we haven’t seen, though we now get a clear look at the foglights and the upper grille’s chrome surround. 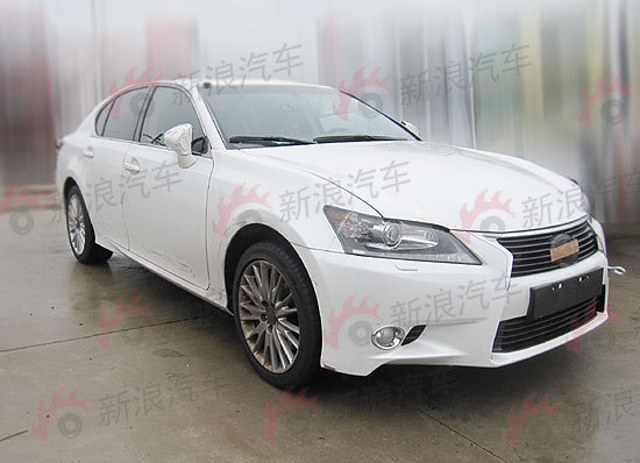 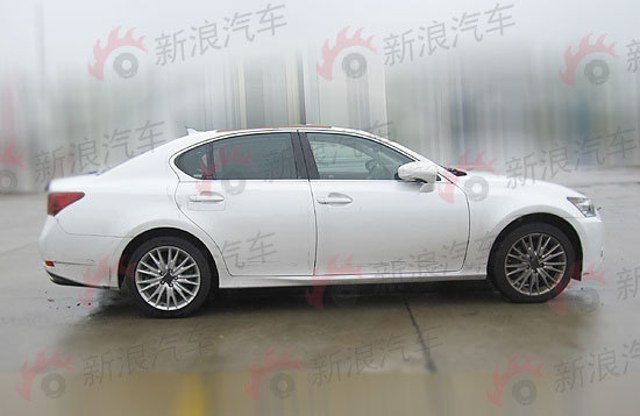 The side profile is almost identical to the LF-Gh concept, with only the door handles & side mirrors showing any difference at all. More than anything, I see the profile as a minor muscular evolution of the current LS — too bad the Starfire Pearl paint hides much of the design lines.

This is also our first look at the base-trim wheel design (at least in China) — this GS is also shows Lexus’ typical AWD stance, which is to say the wheel gap leaves something to be desired. 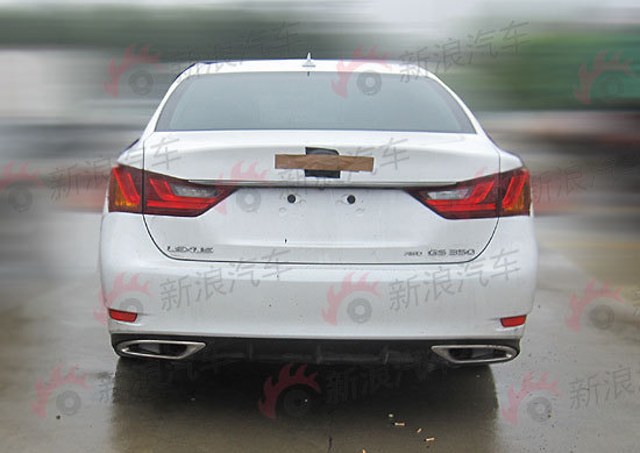 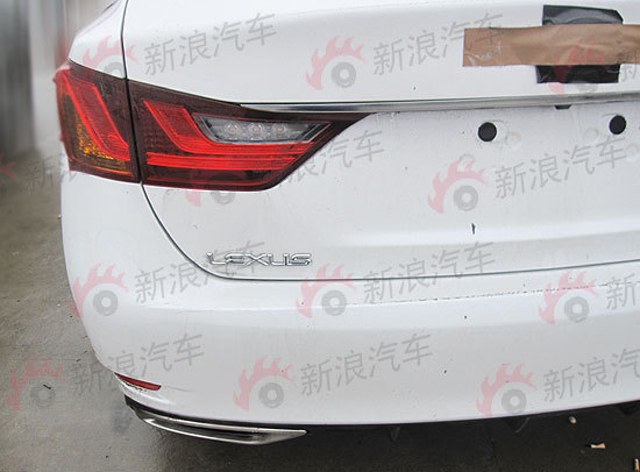 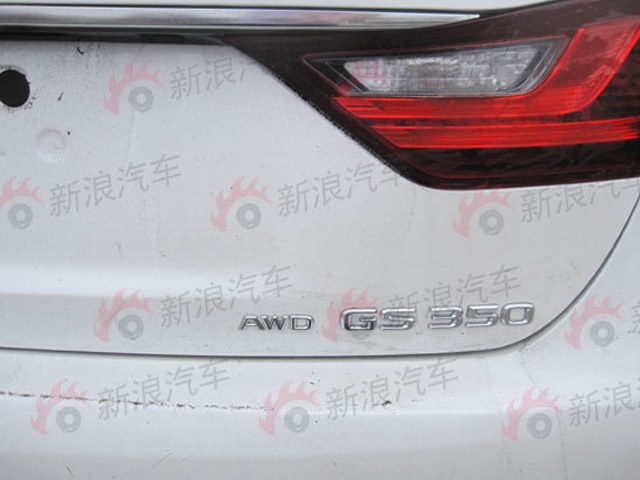 Where the rear of the LF-Gh concept mirrored the design lines of the front-end grille, there’s no trace of that in the production GS — in fact, the rear may be where Lexus deviated from the concept the most. Still, I’m loving the integrated exhausts and diffuser, and even with these low-res photos, the taillights look fantastic.

Trying to get a good idea of the GS from these photos is quite difficult — there’s a fish-eye look that distorts the lines of the car, and as mentioned, the Starfire Pearl makes it hard to decipher any sheet metal details, but there’s certainly enough here to carry discussion until the car’s official debut on Thursday.

This car had so much potential!!. I think they have toned it down way too much from the concept. The front looks way too much like a CT and too bad they did not use a different colour where the number plates goes as the front! Ohh well now we wait for the official pics.
As much as I love Lexus, I am convinced they will never produce anything ambitiously designed (apart from maybe the LFA). Why at all build a super great show car if the end looks like this...?! I don't think the age group prefers THIS.  Sorry, I am completely disappointed and am eager to see the official pics before I get the final opinion...
big disappointment, just looks like another corean car
The rear looks like a supersized IS, the profile looks like a shortened LS, and the front like a CT. Somehow, it seems to work in a vanilla sort of way. Or maybe the vanilla reference is just because of the horribly underwhelming white color. Also, Lexus, sort those wheels out.
I made a comment in the interior pics section that the interior looks so good I might forgive the exterior. Not so fast. I agree with the others that the back looks like a Hyundai, and the front grille looks unnecessarily contrived. The profile just looks boring. Of course styling is subjective and these are just my opinions. I look forward to seeing it in person.
Totally dissapointing! From a bad looking concept, to a worse looking production car. The only good thing about the concept was the subtle A-shape they had incorporated on the rear and the exaust. Now that A-shape is gone and the exaust looks ugly. Excuses, excuses... bad lens, white colour, 4 wheel drive etc. Other car makers makes cars that look good in white and with 4 wheel drive!! The 3gn GS looks way better! Lexus should have based their design on that instead and modernised it a bit. Not even the apologists have called this car pretty. The best thing that has been said is: "lets wait and see better pictures".
Keep in  mind this is a 350 awd base model. I suspect a 450h f-sport would look more aggressive. Personally I'd love to the the middle of the front bumper blacked out like this: http://trdparts.jp/english/image07/vitz07.jpg
I love Lexus, but only when they're inspiring this looks bored......... the front end is to short, and by comparison the rear end is Huge! the C-pillars are just greatly exaggerated, and the windows are too big, sounds like the current GS... At first I thought the current GS couldn't get any uglier,     but amazingly LEXUS do figure out a way, and they did..... even the current ES has a more sloping roof line, though it's less sporty.... doesn't impress me in any way, the interior looks dull, cramped with cheap switches in the rear console their L-finesse only works on compact cars (i.e.IS,CT) and the tail light seems like it came out from the Sonata factory's shelf, there's no denying with that!!!
Ash.... Lexus... OH, it's my dream!!!
Again;I love the new GS design and I do hope they go ahead with the coupé. Try to imagine a GS along the lines of this: http://photo.netcarshow.com/Infiniti-G37_Coupe_2009_photo_06.jpg
Again;I love the new GS design and I do hope they go ahead with the coupé. Try to imagine a GS along the lines of this: http://photo.netcarshow.com/Infiniti-G37_Coupe_2009_photo_06.jpg
Funny how different cultures and individuals can produce different tastes :-) I agree with the comments of KiwiLexus.  The mix of CT with IS and LS gives the new GS a much more family look and therefore suits perfectly in the line up, but also makes it a bit more of a classic style.  In my opinion this is a good evolution to make the German 3 drivers think about Lexus for their next car.  At least here in Europe.  So the fact that the styling is not ambitious enough - for some of you - can be a major commercial tool to conquest from competitors... For a non-classic design in somewhat the same (sub)segment, there are models like BMW 5 GT, Mercedes CLS or Audi A7 to chose from.
White car, bad quality camera, dirt on the car, tyre gap, stupid rims.. Wait till you see the car in shiny smokey black, with appropriate tyres and with its LED's etc all turned on.. Then start talking..

as a lexus fan this is a huge dissapointment. from the great looking concept car they've absolutely butchered it! the huge chrome on the grill looks like a half shaved dangling mustache, the rear looks like an older version of the current IS. The front head lights are left over from the RX. From a futurisic concept to this design from the early 80's. Why lexus why???!!!!

I just love 70/80's design! The golden age of the beautiful cars, some names? BMW 6 series (E24), Some squared Maserati and Alfa Romeo (and this GS remind in me a modern interpretation of 70's Alfa Romeo sedan). So,nothin wrong in that!

It actually look's better with camoflage on. What, hmmm http://media.il.edmunds-media.com/lexus/gs350/2012/fd/2012_lexus_gs350
Based on the poor quality, environment and condition of the picture, I am disappointed at the grill on the front end; no where near as aggressive and dramatic as expected (Base model or not). Just because it's a 'base' model doesn't mean the whole design shouldn't look good. The teaser photo gave me the impression that the whole upper and lower grill will have a chrome surround similar to Audi. I personally hope that the F-Sport version of this will be more aggressive with some additional F-Sport bodywork. I hate to say it but being an owner of the current GS, I prefer what I got now with the fastback look. It's only my opinion of course. :D
One thing noticed on the profile shot is the sunroof that extends over the rear seating area----I hope this is something that NA-US  will receive. Something we have not seen on the GS before.
To all you haters out there.  You shouldn't care what this masterpiece looks like it will be passing you by so fast you wouldn't even notice what it looks like!!!
I own CT200h and that GS is too much of it. Front, taillights, headlights, grill and so... Not impress/ev.

You should be proud that you're car looks like the GS, the hottest car in the market now!!!