back in May." /> Nürburgring Inspired Lexus CT 200h Concept from Australia | Lexus Enthusiast
Menu
Log in
Register
You are using an out of date browser. It may not display this or other websites correctly.
You should upgrade or use an alternative browser.

Once again, Lexus has chosen the Australian market to debut a new variant of the CT 200h — this time, it’s a concept inspired by the Nürburgring racer we saw back in May — here are some photos (click for larger versions): 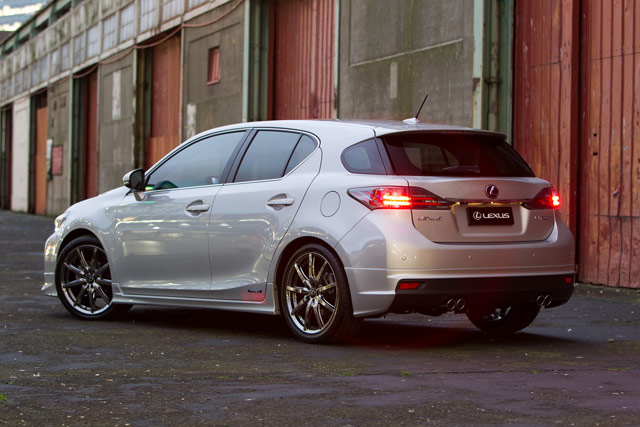 Changes from the standard CT 200h include:

Also mentioned in the press release is the 2.4L engine that was used in the Nürburgring racer CT (presumably the 2AZ-FXE from the HS/Camry Hybrid), and includes this quote from Lexus Australia chief executive Tony Cramb:

Lexus Australia chief executive Tony Cramb said the CT 200h Concept will be used to gauge public reaction to the visual and performance enhancements to the car.

“The Australian International Motor Show gives us the perfect opportunity to engage with potential customers and assess their reaction,” said Mr Cramb.

“There are elements of the CT 200h Concept that are currently under evaluation by Lexus for introduction into the local market.”

This would suggest Lexus is actively looking at a higher-powered CT (or at the very least, Lexus Australia is pushing for such a vehicle) — in fact, the appearance of the CT Nürburgring racer was the clearest indication that such a move was on the table. Hope it’s true, it would be a great move.

this is a very nice looking vehicle
I think a more powerful CT would be a great idea.Not that the 200h is under powered,but it´s such a sweet car to drive and it can easily handle quite a bit more power.

That's exactly it, this is a car that handle the increase in power -- I have to think this has always been the plan for Lexus: Introduce CT with Prius drivetrain, build up the model on that, then bring in a more powerful variant in a couple years using whatever's powering the next-generation Camry Hybrid.

This should be how the CT-F should look.......
A CT 300h or CT-F would be awesome!!!
Love it.
This can be for the F-Sport package. The CT 300h should have a smaller, integrated lower lip spoiler.

I like this car with this color !!!!
otherwise i like that but no the quad exhaust. one round, oval or triangular would be ever beter
Driving the NX 450h+