The results for the J.D. Power’s 2011 Initial Quality Study are in, and Lexus has ranked highest among all brands with 73 problems per 100 vehicles (PP100), marking the thirteenth time Lexus has been at the top of the list since 1990 — here’s a chart for some perspective: 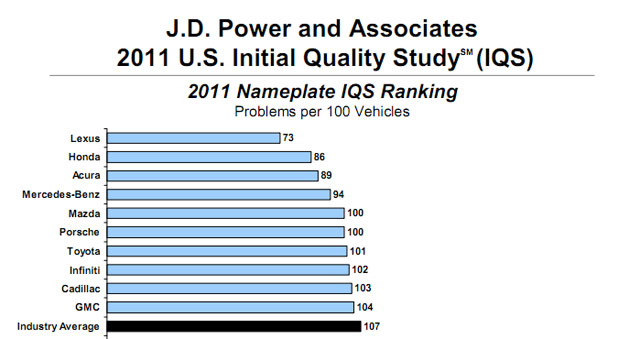 In related news, two Lexus production facilities were awarded the very prestigious Platinum Plant Quality Awards with only 24 PP100 each: the Kyushu 2 plant in Japan that produces the IS line, ES 350, & RX line, and the Cambridge South plant in Canada, which produces the RX line. The Kyushu 1 plant, which also builds the RX (along with the Toyota Highlander) earned the Silver award with 27 PP100.

Congrats Lexus! Definitely something to be very proud of!
Keep up the great work lexus-----looking forward to new products and leading again in the US.
The way this survey works doesn't provide a reliable and consistent data, but at least Lexus is back to #1, where it belongs! I'm sort of disappointed that the LX isn't up there! And in addition to that, I wish that the LX could be a little more!

This may be the case, but any inconsistencies would be mirrored across all brands, not just Lexus -- wouldn't that make it fair? ;-)
Annoyingly true aha

This just proves Lexus is the best automaker in the planet and the Japanese automotive industry is #1 in the world..
Yay for Lexus !
Lexus is #1!!!!
I have a new Lincoln (in addition to two Lexus SUV's) that I took in for routine service recently.  I was amazed at the poor quality of customer service at the Lincoln dealership.  I guess I've just been spoiled over the last decade (and four Lexus vehicles) by the job the folks do at the Lexus dealers I use here in Illinois and also in Florida.  Kind of makes me wonder why I decided to change to Lincoln in the first place. Thank you Lexus; keep up the good work.
i HAVE A 2011 CTS  CADILAC ONLY A COUPLE MONTHS OLD THAT i LEASED NEW. nOW i WISH THAT i HAD LEASED A NEW LEXUS OR BOUGHT A NEW LEXUS. mY RESEARCH CONVINCES ME THAT THE LEXUS IS THE BEST QUALITY AND BEST BUY. iS THERE ANYWAY THAT I CAN TRADE THE CADILAC OR SOMEWOW TRANSFER THE CADILAC LEASE TO A NEW 2011 LEXUS? (LEASE OR BUY). JAMES PALMER  NAPLES FL   ELECTRON1103@AOL.COM
Lexus NO  1
Next-Generation Lexus LX Spotted!