END_OF_DOCUMENT_TOKEN_TO_BE_REPLACED " /> Paris Hilton Receives Lexus LFA for 30th Birthday | Lexus Enthusiast
Menu
Log in
Register
You are using an out of date browser. It may not display this or other websites correctly.
You should upgrade or use an alternative browser.

The Daily Mail is reporting that Paris Hilton has been given a yellow Lexus LFA by boyfriend Cy Waits for her 30th birthday: 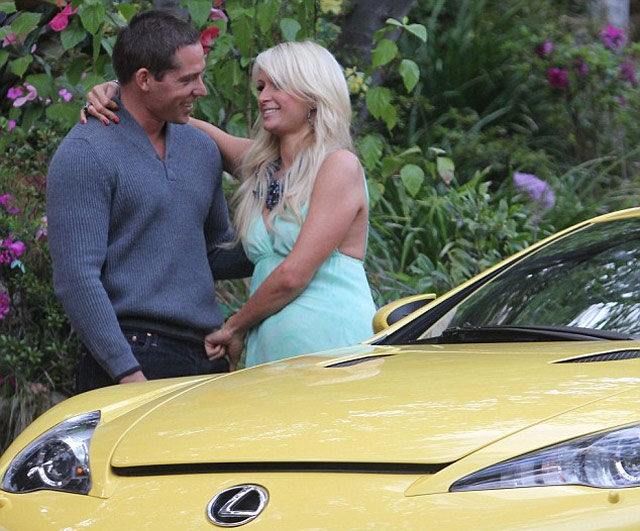 Can’t say I’m totally surprised, this rumor has been floating around for quite some time — though it was expected that Paris would have Passionate Pink as her exterior color.

This may still prove true — here’s a tweet from Lexus Magazine: 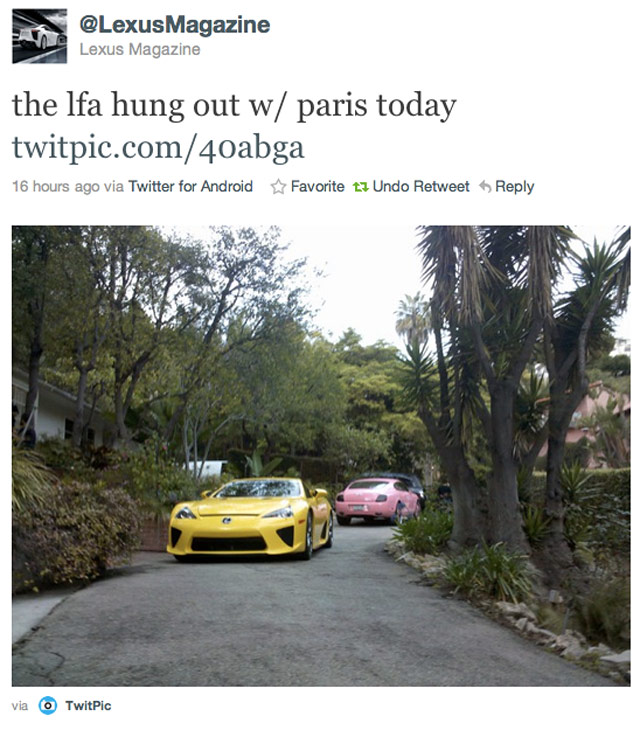 This yellow LFA may prove to be the same yellow prototype we all know and love — meaning there’s still a slim chance we’ll see a production model in pink after all.

My boyfriend is such a prankster. As a practical joke when he surprised me with the car. He first had them pull up a yellow lexus. I was in shock! The car is amazing! But yellow! So not my style! Ha. Then he had the real present pulled up, the lexus in a beautiful pearl white. 🙂

There you have it, mystery solved.

shes real car is in order
Given the gravity of simply being who she is, as long as she doesn't wreck it, hope she enjoys and appreciates the car.
nice car, not to be a perv or anything but look in the picture with her, and look where hand is.... am i the only one seeing that?
Wow.
Sigh ... why she have a Lexus LFA while I only have a Toyota Corolla ?
I don't want one anymore........:`-(
Krew - I was really hoping you wouldn't publish this story. Love thar car, Paris .. pffft !!

snine­tytwo wrote:nice car, not to be a perv or any­thing but look in the pic­ture with her, and look where hand is….
am i the only one see­ing that?

No, I definitely see it, though I'm praying that it's just a optical illusion. >:-(
@krew: thank god i'm not the only one! we'll just go with the optical illusion! hah
waaawwww.... ;-);-)
lol LF-A is Paris Hilton Car hahaha 8-)
Turns out that is not the present..... the actual present is white: http://www.musicrooms.net/showbiz/26836-paris-hilton-reveals-birthday-prank.html
Pardon my ignorance,but weren´t LFA owners supposed to be not just anyone with loads of money,but people deemed to be good ambassadors for the brand? How the heck is that dui dim wit a good ambassador?!
Yes, I too am seriously disappointed. Lexus will sell one to anyone I guess :( But she does have a Ferrari too.
Actually not completely true. Lexus only wanted to make sure people who want to drive the LFA will buy it. Not collectors who will put it in a garage and then it collected dust for decades. Lexus wants these LFAs to be seen on the road to showcase everyone what Lexus is truly capable of. She used to drive a MacLaren SLR so I don't see why Lexus would have any issue with her owning one. @Eljay:

Eljay wrote:Par­don my ignorance,but weren´t LFA own­ers sup­posed to be not just any­one with loads of money,but peo­ple deemed to be good ambas­sadors for the brand? How the heck is that dui dim wit a good ambassador?!

That is true, she drove that SLR everywhere! haha I am sure this LFA will get its fair share of exposure also.. Side note: does anyone else think that the whole yellow "surprise" thing was a marketing stunt by lexus? @Rol­laXRS:
All exposure being good exposure? I hope Lexus feels the same way when Hilton t-bones a schoolbus whilst hopped up on powdery Columbian imported goods...