END_OF_DOCUMENT_TOKEN_TO_BE_REPLACED " /> Autoblog Reviews the Lexus CT 200h | Lexus Enthusiast
Menu
Log in
Register
You are using an out of date browser. It may not display this or other websites correctly.
You should upgrade or use an alternative browser. 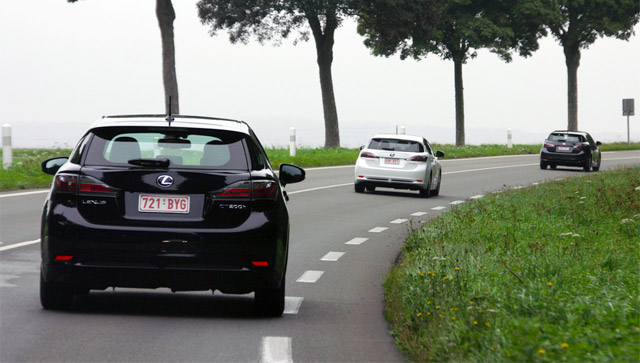 Damon Lavrinc of Autoblog also attended the Lexus CT 200h press launch in France, and today he shares his thoughts on the new hatchback hybrid:

…it’s obvious the CT’s suspension tuning has been canted towards the comfortable side of sporty. Not a bad thing when trying to eat up the miles. On the highway, it’s been a decidedly Prius-like affair – completely expected considering it shares both major platform components and its Atkinson-cycle 1.8-liter four-cylinder with the flagship green machine from Toyota.

By the time we hit Paris proper and begin winding our way through mid-morning traffic, the CT 200h begins to come into its own. The slightly stiffer springs, along with its Prius-sourced (albeit modified) MacPherson front suspension, Avenis chassis components and HS 250h double A-arm rear suspension work in concert to dull the combination of marginally neglected pavement and cobblestone streets.

All of the dynamic Lexus hallmarks are present: slightly anesthetized steering, marginally mushy brakes, a bit of body roll and a general lack of enthusiasm for being pushed too hard. But it’s far better than most hybrids.

If you’re looking for a Euro-flavored premium hatch with the allure of a hybrid badge and the fuel economy to match (42 mpg city/41 mpg highway), the CT 200h is, frankly, your only option. Its inherit sportiness is questionable, but if you’re moving up from a Prius – which Lexus fully expects some of its buyers to do – then it’s more than capable of elevating your pulse, if just a few BPM.

Update: As TLE reader Eljay points out, the Autoblog article is accompanied by a very nice photo gallery — highly recommend checking it out.

Very good point, I've updated the post with a link to the photo gallery. 8-)