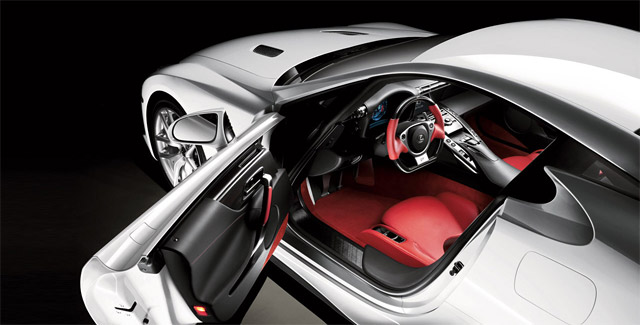 Automotive News has some details on Lexus LFA sales in Europe:

[…]a third of the orders from Europe were placed in Germany. Lexus brought eight of those buyers to this year’s Nurburgring 24-hour endurance race in Germany to wine and dine them as two LFAs competed at the legendary circuit. Each buyer already had plunked down 100,000 euros ($125,715).

The article goes on to mention some of the reasoning behind the owner’s decision to buy the LFA, including their expectation of much better customer service than the traditional supercar manufacturers like Lamborghini & Ferrari. There’s even some quotes from a couple of the future owners:

One buyer, a manufacturing engineer who declined to be identified, compared the LFA to owning a rare, ultraexpensive mechanical wristwatch. “To most people, it’s an unknown quantity,” he said. “But true aficionados know its value.”

Manfred Sattler, the owner of a software company and an auto racing team, picked the LFA primarily because it is different. As a German with a 500-hp Hummer H2 and two Dodge Vipers in his garage, he has an eye for the unorthodox.

Said Sattler: “About 20 years ago, I said I’d never drive a German.”