END_OF_DOCUMENT_TOKEN_TO_BE_REPLACED " /> Lexus LS to be Recalled for VGRS Issue | Lexus Enthusiast
Menu
Log in
Register
You are using an out of date browser. It may not display this or other websites correctly.
You should upgrade or use an alternative browser. 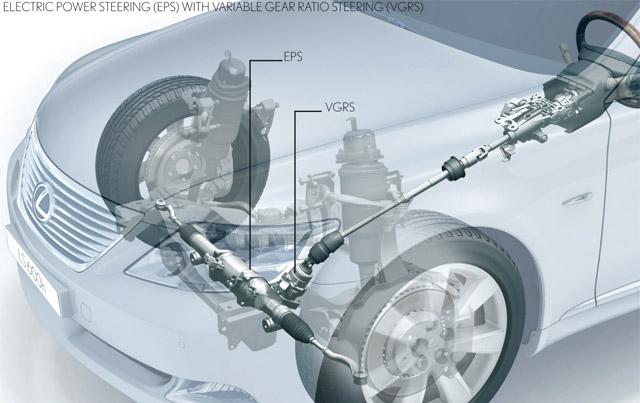 This matter has been under investigation by TMC since March this year who have received approximately 10 complaints in Japan.  No accidents have been reported relating to this issue and we have received no reported cases of this concern in the UK market.

VGRS is a feature that enables easier handling during low-speed driving and provides better stability during high-speed driving than conventional steering by changing the gear ratio.

Unfortunately, this option comes on ALL LS460's, at least all the ones I see. As a longtime customer since 1990 and now on the "inside", this disappoints me. Although this is not a Major problem, nor a dangerous one, it shows how "LEXUS" of the last decade or so is NOT the "Lexus" of the past. This company needs to right the ship and find its way. They have some very questionable paint choices, the UGLIEST rims in the entire auto business, they are behind on "fun" technology and the bank has hurt the car sales with stingy residuals and bad timing. They have a TOYOTA mentality, and not a LEXUS mentality. While I still believe Lexus vehicles are the best made in the world, their separation from the competition has narrowed greatly.
I agree with the rims and tech. I would also add I wish there would be more options and some cars could have better handling. The past Lexus vehicles had very little reliability issues and not even this many recalls. But for the Lexus LS recall, Toyota/Lexus sure haven't gotten a break! I still wanna get a Lexus but all these recalls are sure disappointing to hear.
Okay, time for some classic WorldofLuxury constructive criticisms: well, this is better than that airbag issue that Mercedes still hasn't fixed yet and still affects their cars today btw, I really like the solidity of the LS 460's rims, even more than the LSh's. aha, and steering wheel alignment is also a big problem in my 2003 LX 470, the vehicle in which Toyota first introduced their VGRS - never was actually fixed despite multiple dealer visits to Longo Lexus and the bills that followed. yeah... Lexus vehicles seem to lack a long brag list, which is unfortunate, and they also seem to lack anything that makes the owners feel like their Lexus is true and personal to the owners themselves only. Anyways, I love the LS 600h L's headlights. I only wish that Lexus would take advantage of LED technology to make the taillights distinctive at night; for example, it would've been nice if the LED clusters followed the shape of the taillights rather than concentrating themselves in a small, rectangular area, not to mention that it would be nice if the lights didn't follow a different pattern just because part of them were on the trunk portion. ...hope that made sense... lol
Shame... huge shame. :-(
What's going on with Lexus? I kept on hearing recalls upon recalls. I always look up to Lexus/Toyota when it comes to reliability. Consumer Report always rank them in the top 3. A few years ago when I went to the LA auto show, Lexus was showing off all their JD Power and Associate awards for almost every year. I was really impressed. Lexus was living up to their 'Pursuit Of Perfection' slogan. Now, I'm not sure. It seems like the more technologically advanced and sophisticated a car get, the more chance something will go wrong. I hope Lexus/Toyota work it out internally to win back the confidence and trust from the public. @WorldofLuxury You mentioned that you had your vehicle serviced at Longo Lexus. It's rare seeing someone on the internet living in the same neighborhood.
I don't think it's an issue with Lexus. It's purely because it's just such a trivial issue. Really - it still works, just a little slower. Lexus is pretty much the best for all recalls and sorts it out promptly :-) JVX - I'm in Australia... I'm on the same planet as you :-P;-)
If I'm not remember wrong , VGRS can help the Lexus stay straight when it emergency brake on a different surface road . This was explained by Lexus Taiwan before .
I've seen LX 470's do this. Catches you off guard for just a second, and then it rectifies itself.
@JVX: lol It's a big dealer. My dealer is actually Lexus of Cerritos, but Longo Lexus had a higher rating.
I took a real close look at a facelifted ES glistening under the Californian sun today, and boy... it looks great! The new foglights look flat and tacky in the pictures, but in real life, they have a real nice dimension and are virtually jewel-like. Additionally, I saw ANOTHER Audi with one of its set of LED daytime running lights broken. If I remember correctly, it has always been the left set... has to be embarrassing to show off something likely to break aha

WorldofLuxury wrote:I took a real close look at a facelifted ES glistening under the Californian sun today, and boy… it looks great! The new foglights look flat and tacky in the pictures, but in real life, they have a real nice dimension and are virtually jewel-like.

I'm crazy about the ES 350 -- especially after the update. The foglights just don't photograph well.