END_OF_DOCUMENT_TOKEN_TO_BE_REPLACED " /> Lexus RX 450h Review | Lexus Enthusiast
Menu
Log in
Register
You are using an out of date browser. It may not display this or other websites correctly.
You should upgrade or use an alternative browser.

My three month winter road test of the 2010 Lexus RX 450h wrapped up last month, and it’s safe to say that the experience has changed my opinion of Lexus’ most popular vehicle.

It’s not that I didn’t understand the success of the RXh — from a purely practical point, it’s easy to see how combining the ride height, safety & versatility of a SUV with the handling and fuel efficiency of a car would be appealing, but beyond that, the RX never struck me as an emotional vehicle. Sensible, sure, but certainly nothing to get overly excited about.

As it turns out, I just wasn’t looking at it in the right way.

It’s not that the RXh lacks emotion. Instead, it dials in to entirely different set of feelings, to the point that it’s hard to imagine a vehicle that fits better into everyday life.

For one, a fully-optioned RX 450h has a functional luxury that’s hard to match — the Heads-Up Display, the Remote Touch controller, even minor things like the auto-dimming headlamps and adaptive cruise control — they all add up to provide a level of convenience that’s almost extravagant.

Then there’s the feeling of security that the RXh brings — I can’t say I have ever felt safer in a vehicle, especially in the dead of winter. The on-demand AWD system was excellent at determining when to kick in — no matter how dicey the roads were with snow & ice, I rarely saw the orange flash of the traction control. Even the weight of the vehicle (all 4,652 lbs. of it) made me feel secure.

All this led to something quite rare on the road today — throughout my time with the RXh, I felt a general sense of calmness and a surprising patience with the traffic around me. There was never a discernible difference in my driving whether I was in the city or driving on the highway—I enjoyed my time in the RXh no matter the circumstances.

With all that said, the RXh isn’t perfect… 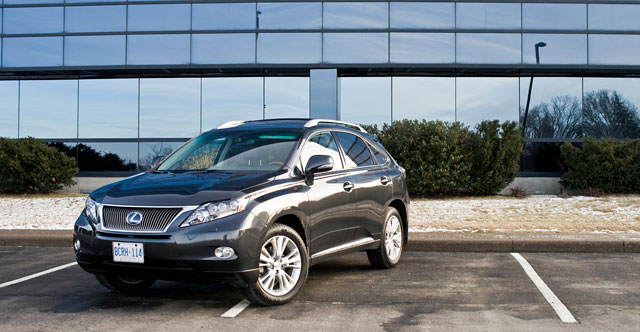 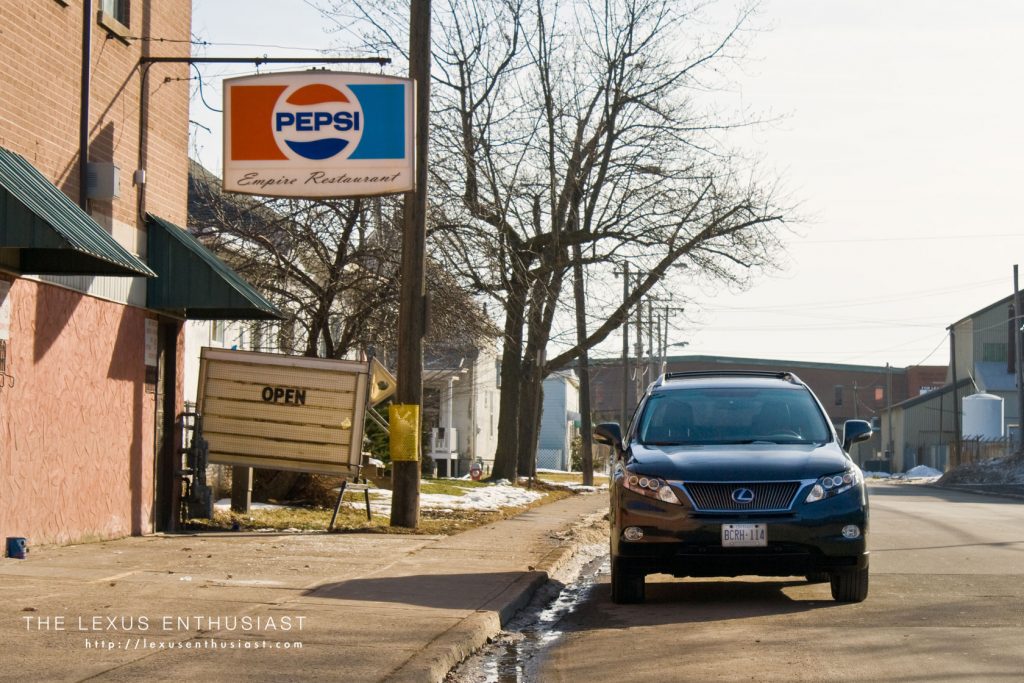 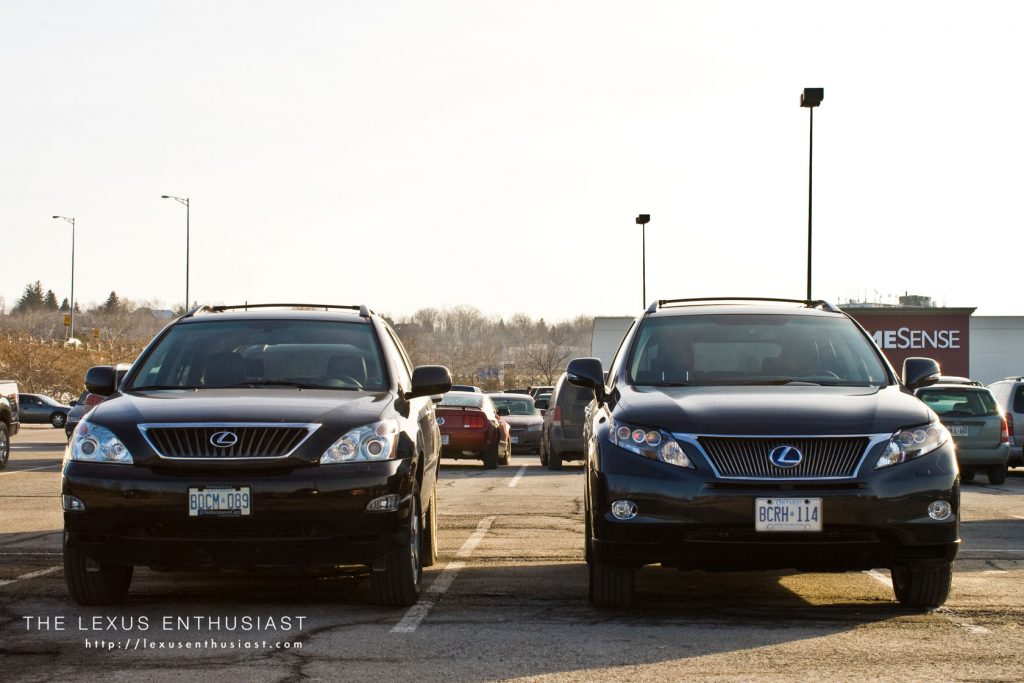 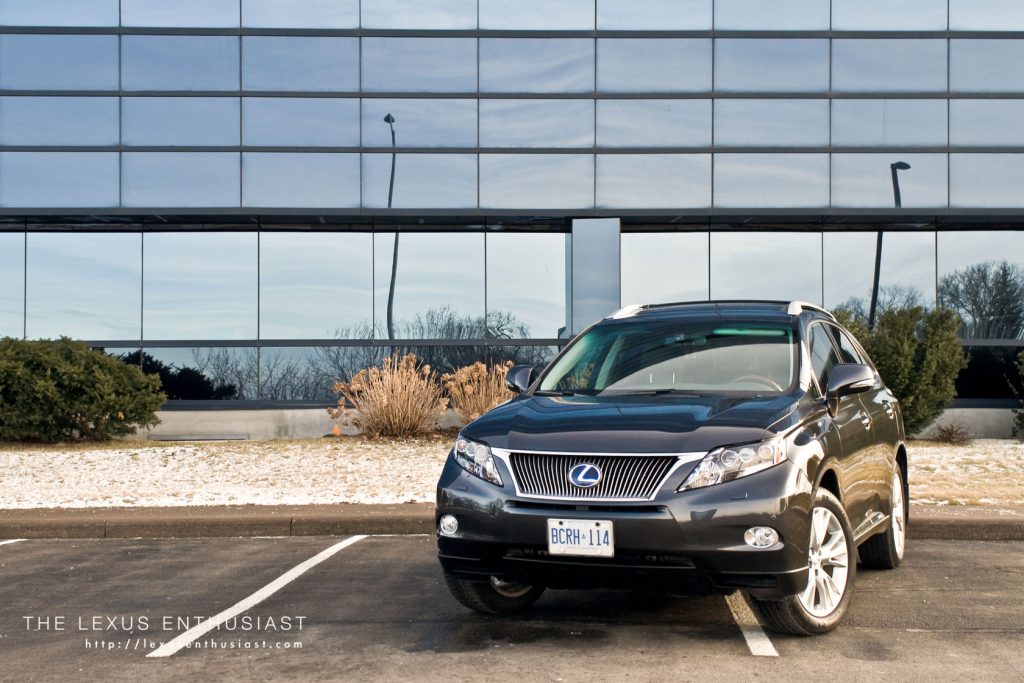 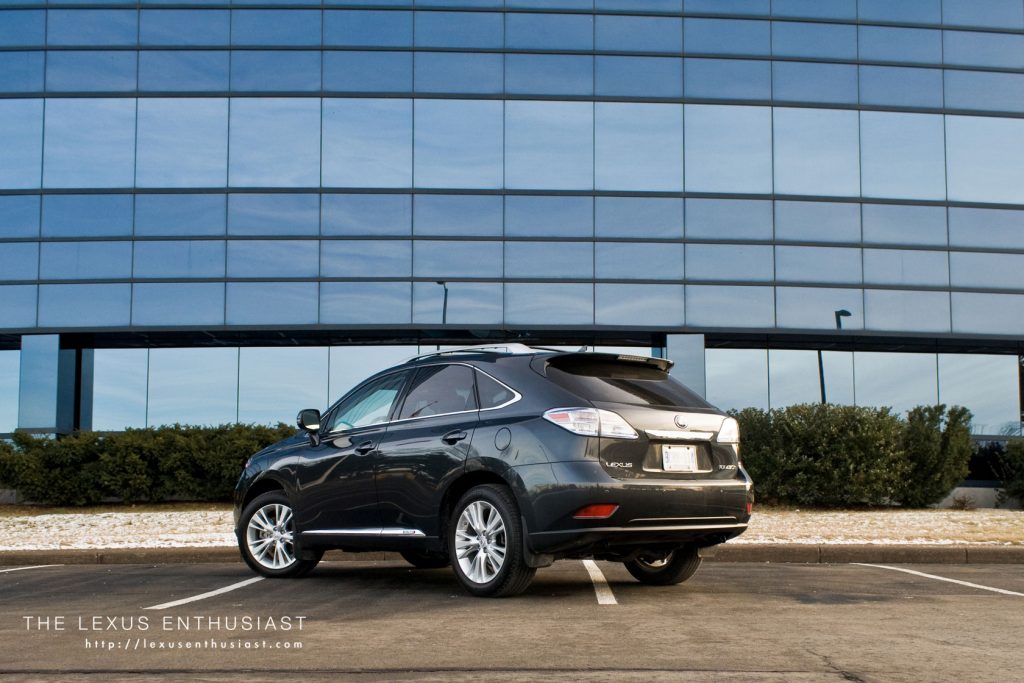 This new RX redesign is a year old now, and with familiarity comes a better appreciation of what Lexus has done with this third generation. The sharp, spaceship point of the front-end is where much of the visual interest is:

With every update, I’ve mentioned the RXh’s LED headlamps, but that isn’t going to stop me from mentioning them again. Their design, with the Lexus-hybrid-standard three-ring bulb pattern, is just beautiful: 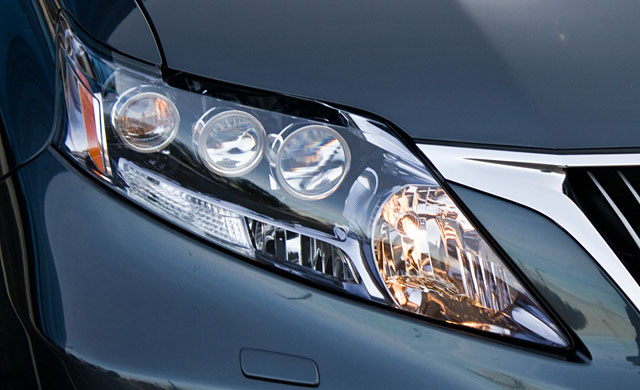 In my mind, it’s the best-looking light cluster design out there, and it has the added bonus of differentiating the RXh from the growing fleet of the other third generation RXs in the road.

On the flip side, I was less than enamoured with the clear rear lights, which have a distinct lack of character, at least when the vehicle was off: 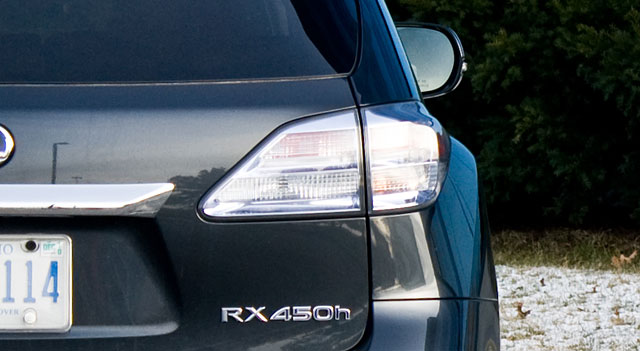 By no means is the crossover segment my favourite in terms of exterior design, but I still found the RXh to be an attractive vehicle. Even more important was the deeper masculinity of the design — whereas the second generation RX was clearly styled with women in mind, there’s a better balance with this new generation. 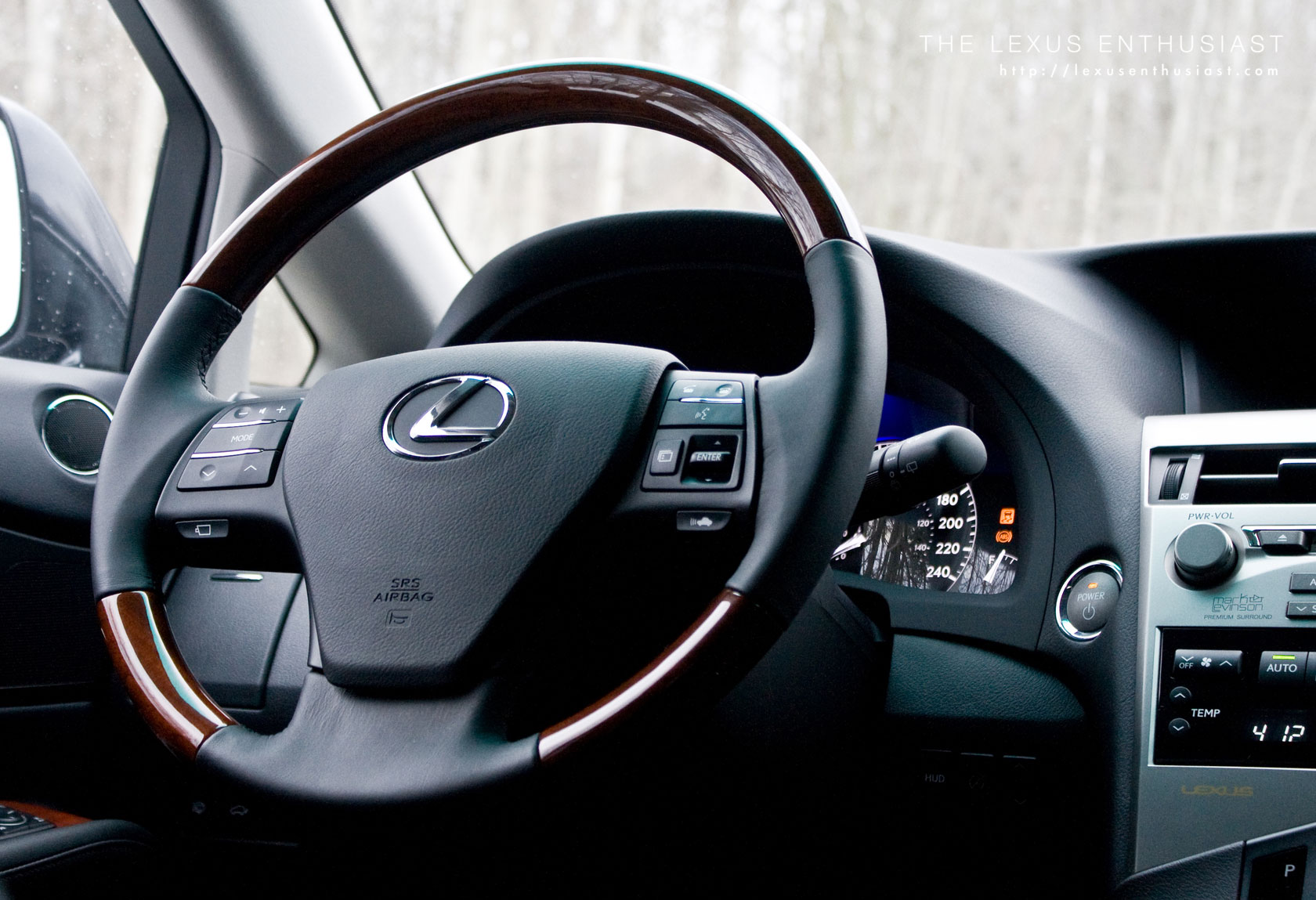 When the third generation RX debuted last year, the interior won the Design Harmony award from Ward’s Auto, and there’s really no better description — the angular edges and sloping design are startling for a Lexus, but it quickly feels modern & stylish, and most importantly, the entire setup feels well thought-out. Everything is in the right place (though the lack of a change container was unfortunate).

All materials were nice to the touch, and were up to the standards set throughout the Lexus lineup, which is to say of the upmost quality. I didn’t find a single flaw over the three months. There were some eventual signs of wear, like those pleasant creases on the driver’s seat, but there was little else that wouldn’t wipe off with a damp cloth. 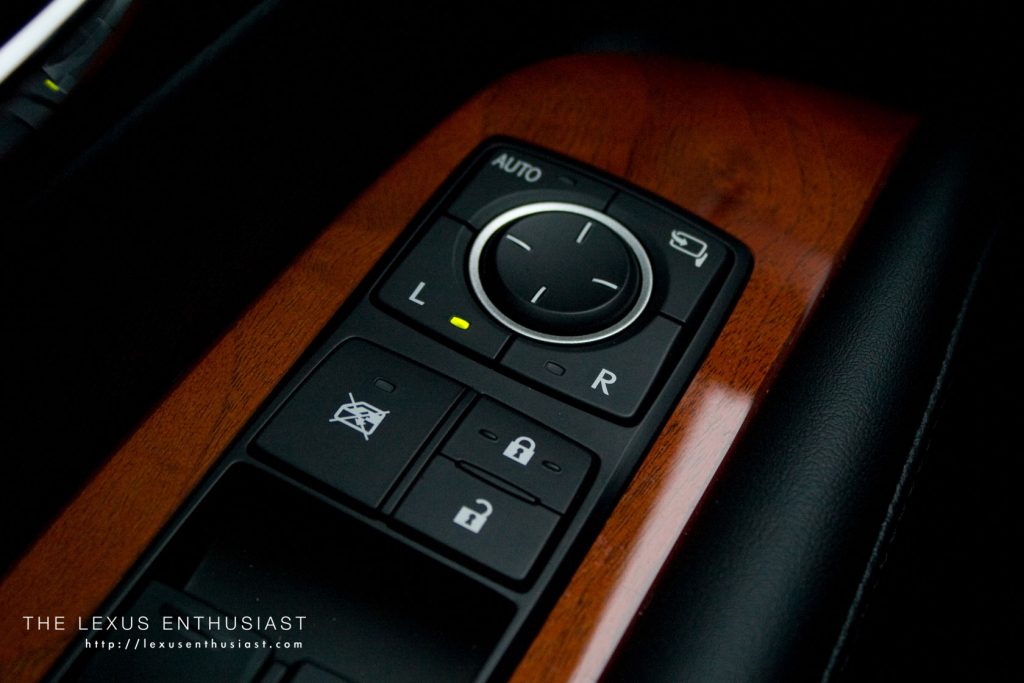 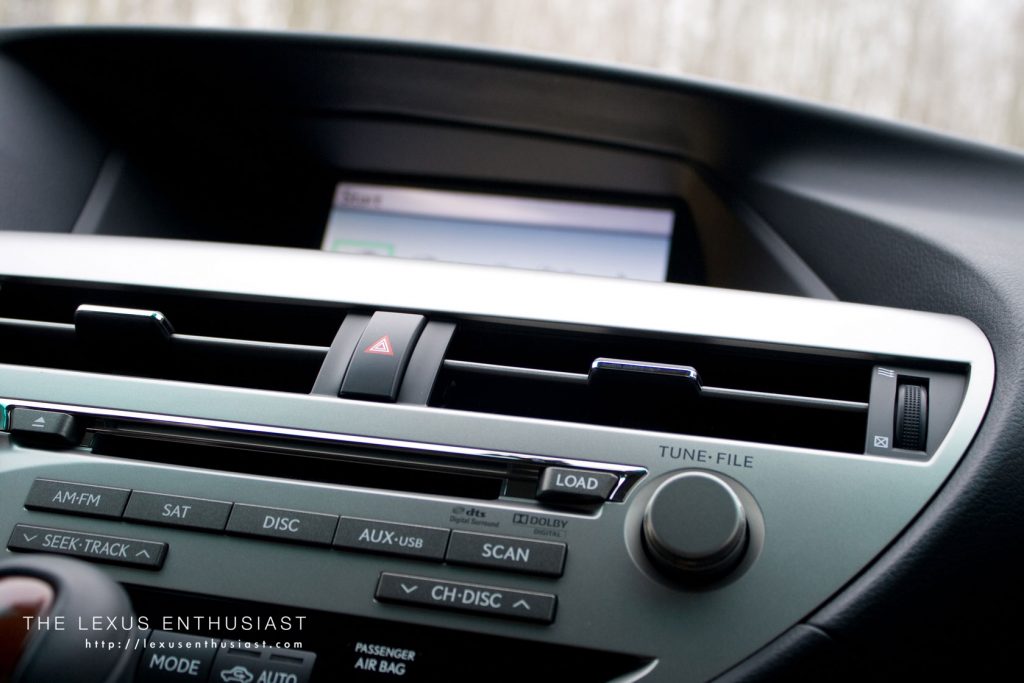 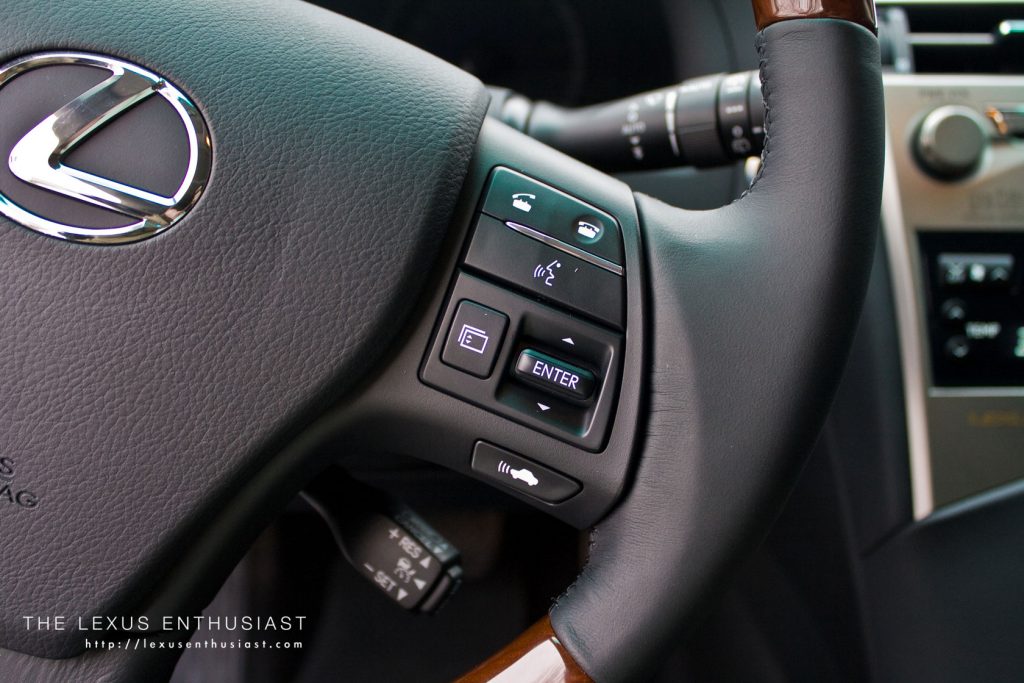 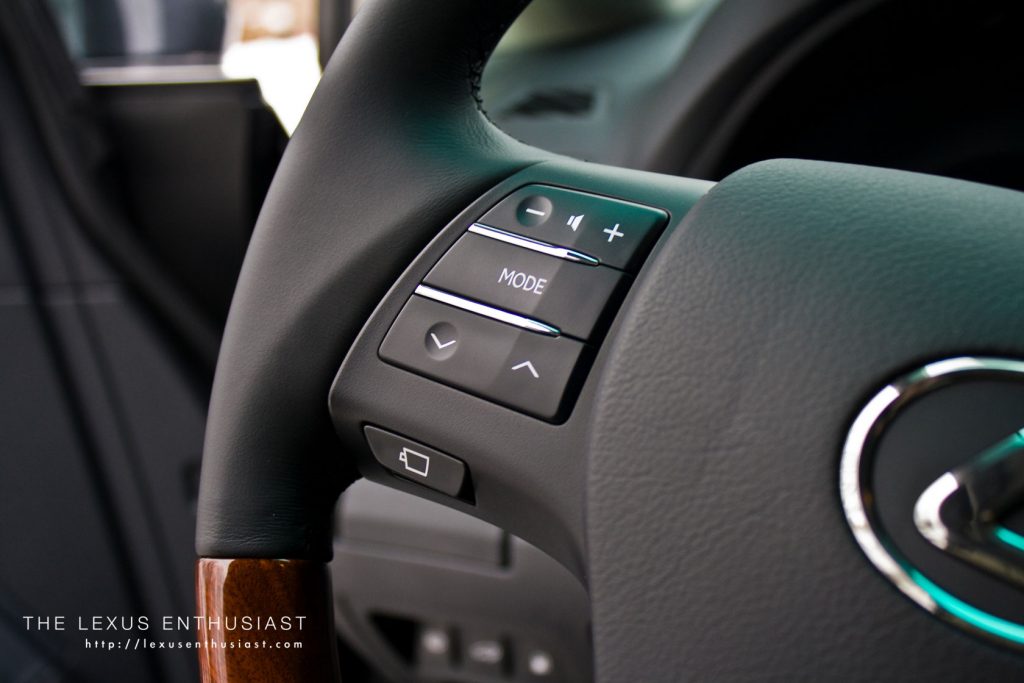 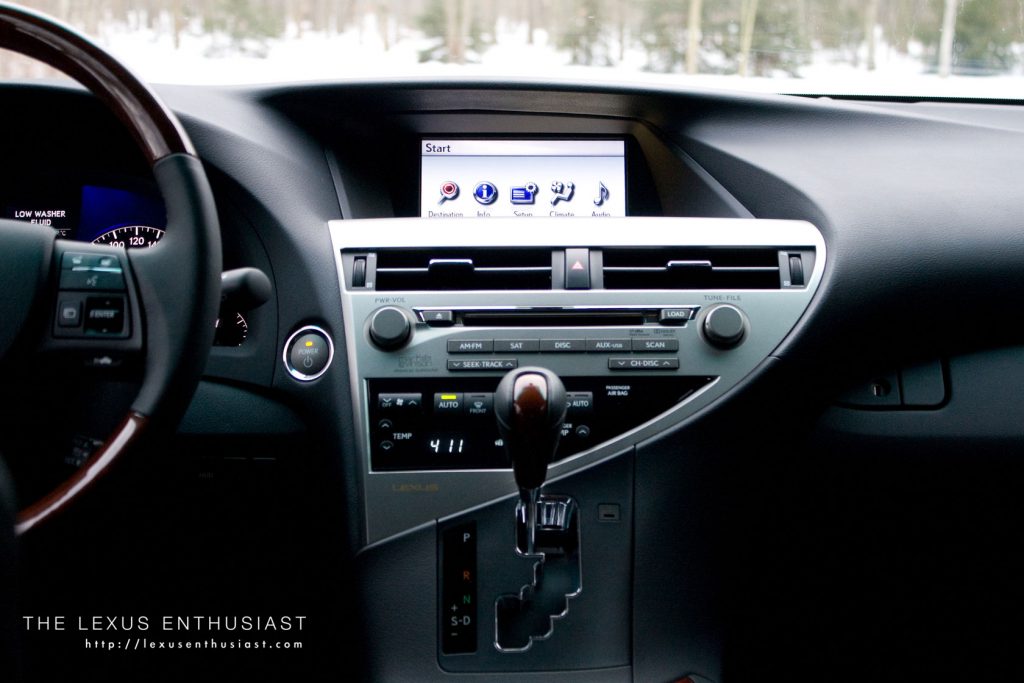 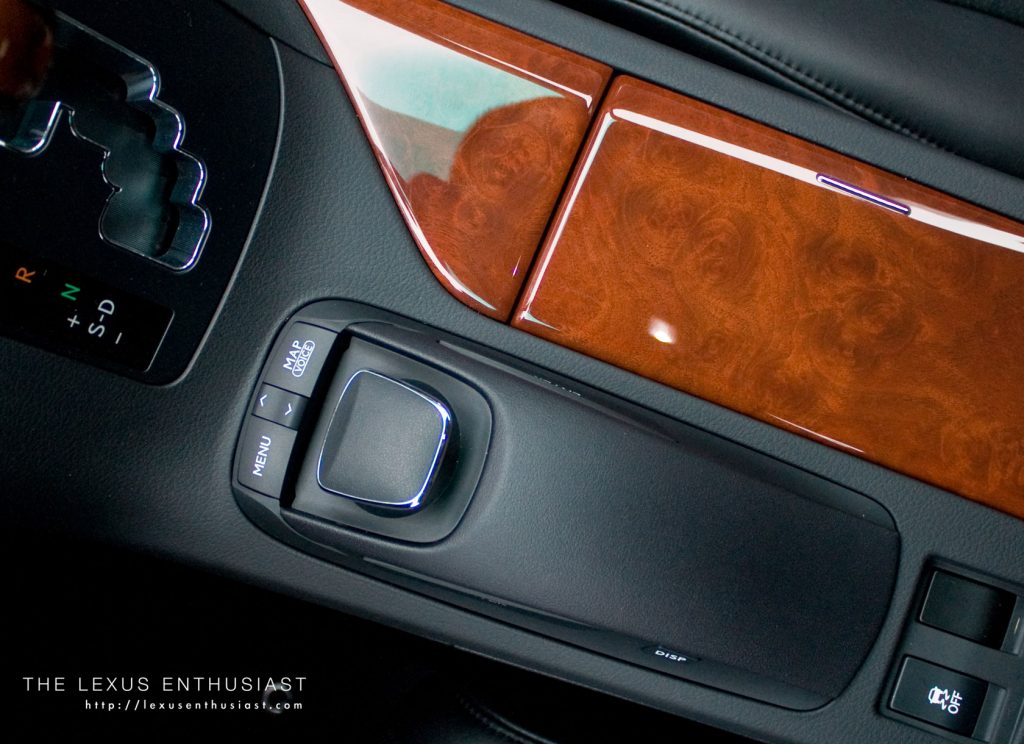 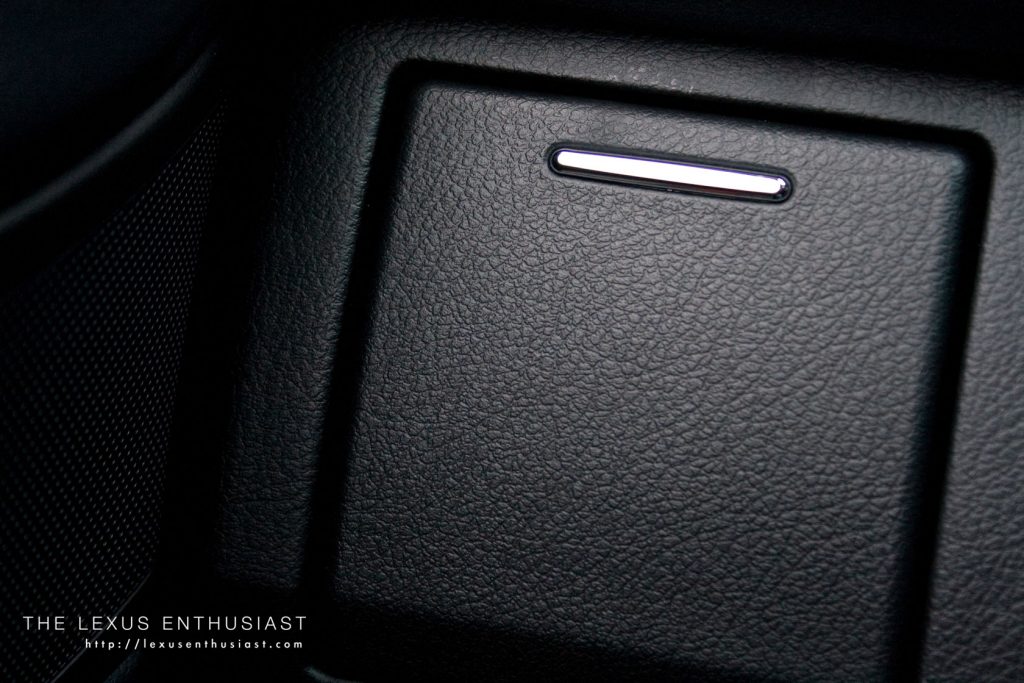 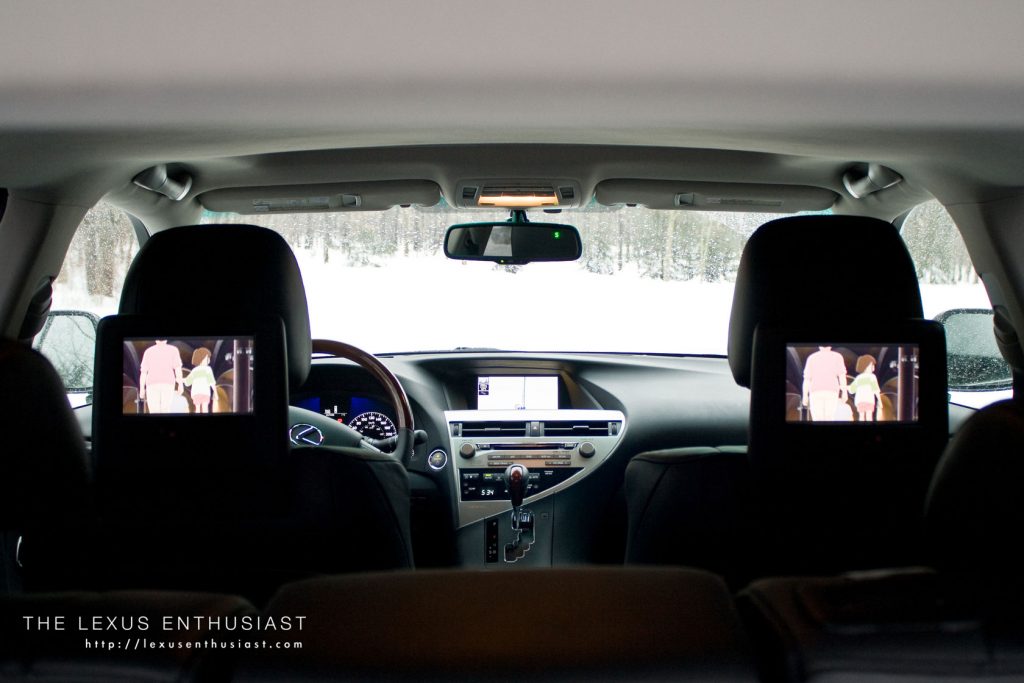 The seating was extremely accommodating — even a stretch of several short trips that added up to 1,270km (795 miles) over a week, neither myself or my pregnant wife experienced any discomfort, which is really saying something. Visibility was excellent.

In fact, the biggest problem with interior comfort didn’t come from inside the vehicle at all—rather, it was the 19” wheels that did the most to disturb the peace. I don’t know if it was the size or the tire itself, but the larger wheels didn’t respond well to the beat-up rural roads around my house. (Having driven RX 350 with the standard 18” wheels last summer, I know the problem to be the wheels and not the suspension.)

Lastly, doing it over again, I would have swapped out the carpet floormats with a set of all-season mats. The winter weather was most unkind. 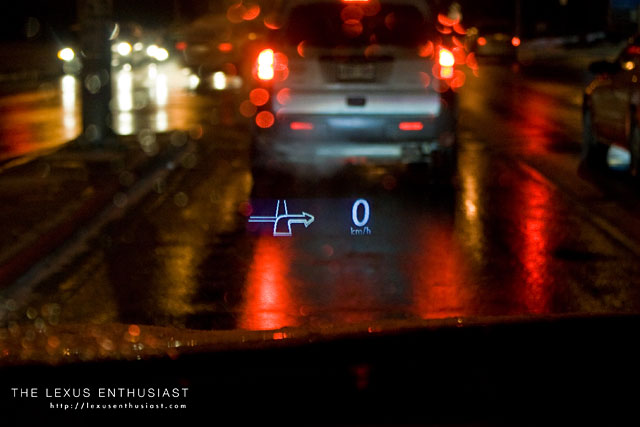 I went in-depth on the RXh technology in my Week 5 update, but there are some final points to make.

After going back and forth a bit, I think the Remote Touch controller is a fine replacement for the touchscreen. There was a certain learning curve, but it has to do with getting used to a new way of interacting with the GPS & the various systems, whereas the touchscreen is easy to pick up immediately. After becoming familiar with the menus, I found myself using the controller’s haptic feedback as a way to select options without concentrating on the screen, which meant a much safer driving experience. In the end, I couldn’t have been more impressed with the new controller.

Not so much with the audio—I ended up abandoning the iPod integration & iPhone bluetooth Audio entirely, and took to using a USB drive to store my music. Put gently, the iPod integration is not ready for prime-time. Scrolling through artists & albums is painfully slow, especially with a fully loaded iPod, and the system has the annoying habit of constantly switching the music to whatever is currently selected during the search. Never mind that any interruption, say adjusting a destination point on the GPS or making a phone call, brings you right back to the beginning of your music catalog. I never once got past the letter “M” without turning off the radio in frustration.

On the other hand, Bluetooth audio worked great, but the reduced sound quality didn’t mesh well with the Mark Levinson sound system. Bluetooth was a good solution for audio books and podcasts, but music was best suited to a direct connection, hence my use of a USB drive. Still, having to constantly pull out the centre console bucket to get access to the USB input was irritating, but it was the best overall solution for digital audio (save for abandoning MP3s and just listening to the XM satellite radio like I did most of the time).

I did try to use the Voice Control exclusively for a week, but didn’t get too far. One-step voice commands (like “turn the temperature up” or “turn the radio off”) worked well, but any commands requiring multiple interactions (Dial by Number, especially) took significantly longer than using the hardware controls.

Overall, the best features tended to be the ones that required little to no interaction. The automatic highbeams that detected oncoming traffic, the adaptive cruise control, the rain-sensing wipers, these were the options that bumped up the RXh’s luxury level considerably, and are the first things I missed after turning in the keys.

(One last thing in terms of technology, the windshield wipers had a terrible time with the winter. Even with the heated wiper option that’s available here in Canada, I had to make sure to clear off the blades by hand.) 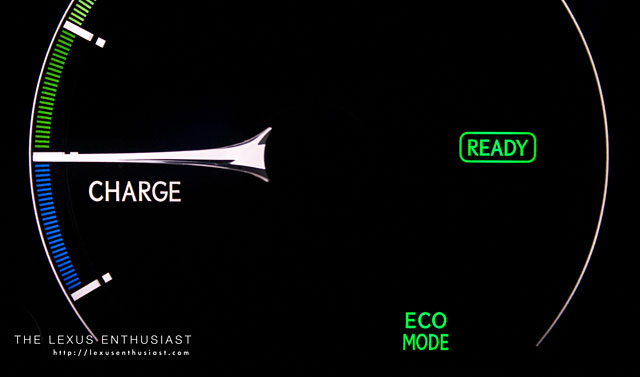 For the most part, my driving personality aligns quite nicely with the hybrid engines, in that I do tend to drive with an eye on fuel efficiency. I enjoy the “numbers game” aspect of it, and am ever-mindful of my fuel consumption. In that way, the hybrid system in the RXh added an interesting twist to the equation —  I had a much lighter pedal and coasted to stops when the situation allowed (i.e. no one behind me).

At the same time, there were times when when the hybrid engine annoyed me, but that was almost directly proportionate to the outside temperature. I felt the winter weather caused the battery to be very conservative, and as a result there was a lot of jumping back and forth between the gas and electric motors. This is a relatively smooth process, but there’s still a noticeable sensation. Happily, this is a non-issue in above-0° temperatures.

For more reading on my time with the RX 450h, check out these previous updates:

Three months of driving the Rh was a learning experience on so many levels, and I would like to thank Lexus Canada for the opportunity. If you have any questions at all about the RX, please leave a comment and I would be more than happy to help you find an answer.