END_OF_DOCUMENT_TOKEN_TO_BE_REPLACED " /> Lexus RX 450h Long Term Review: Week 5 | Lexus Enthusiast
Menu
Log in
Register
You are using an out of date browser. It may not display this or other websites correctly.
You should upgrade or use an alternative browser.

I’m now halfway through my time with the 2010 Lexus RX 450h— after six weeks, the interior controls and options has become second nature, and that familiarity has increased my appreciation of the design decisions throughout the cabin, particularly with the steering wheel layout.

You would think the steering wheel would feel crowded with nine buttons and a toggle switch, but it’s arranged in such a way that I have yet to accidentally press a button. The radio & telephone controls are similar to what’s found in the rest of the Lexus lineup, but one new refinement is the toggle switch that controls the dashboard info display: 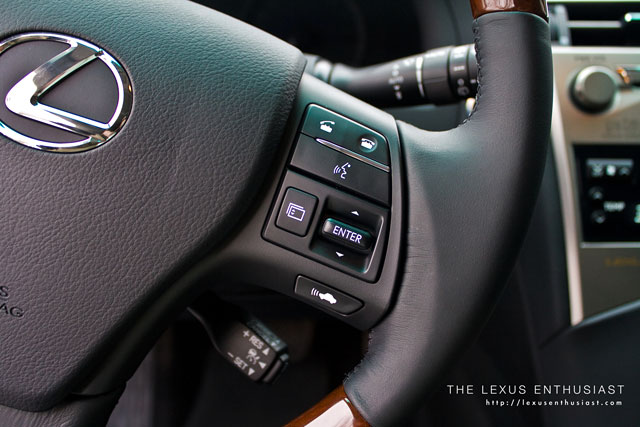 The amount of information never ceases to amaze me—here are the available info screens in the RX 450h: 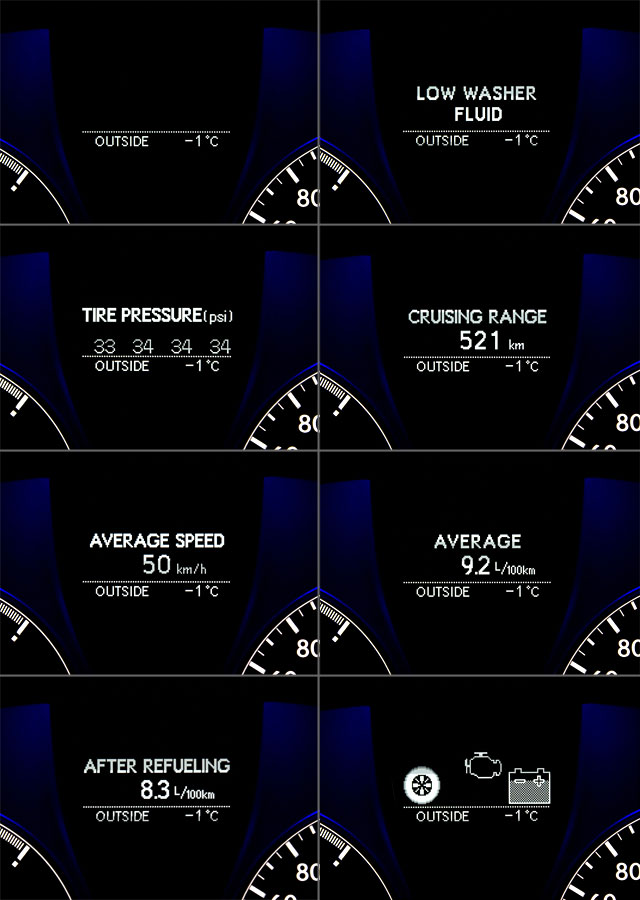 The button beside the toggle switch adds a second level with access to vehicle features: 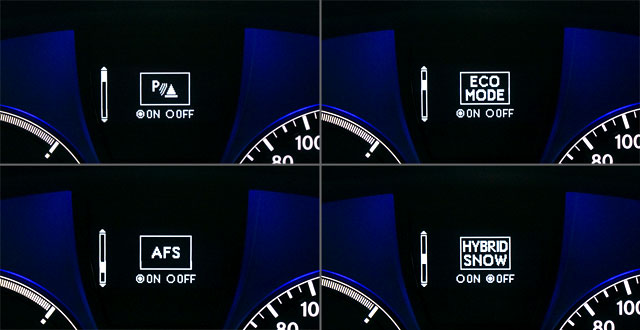 ECO mode modulates throttle response and temperature controls to improve fuel efficiency, and I’ve tried to make a habit to have it engaged—the effect on acceleration and the heating is obvious, but it does help in the gas mileage department. Sometimes you have to balance the good with the bad. Activating the Intuitive Parking Assist is a set-and-forget option, as is the Adaptive Front light System, but it’s a shame that the EV (all-electric) mode is buried in this menu rather than having its own dedicated button like the LSh & HSh.

The passenger side camera, activated by the “tea cup” button under the radio controls, is also extremely handy, and can be viewed from two different angles: 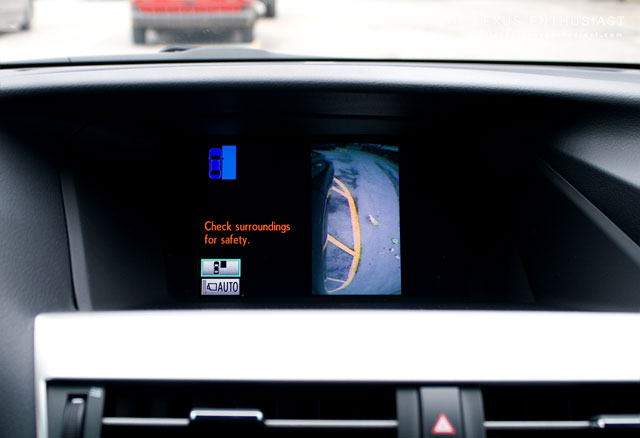 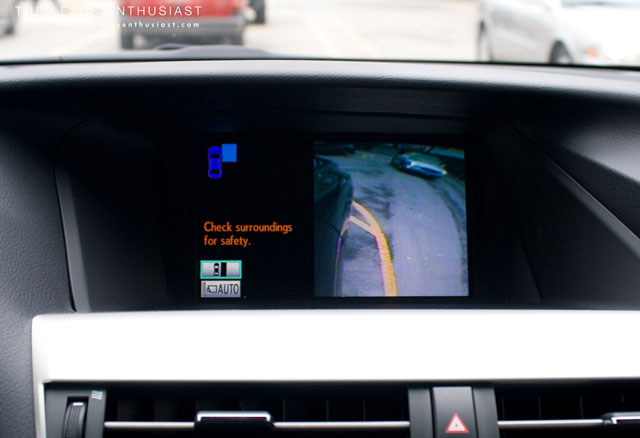 One of the biggest luxuries in the RXh is the radar cruise control, which makes long distance driving as close to an automated experience as I would feel comfortable with. Being able to digitally control your speed along with the distance between you and the vehicle ahead simplifies driving to the matter of a paddleshift and a button press, monitored via your trust dashboard display: 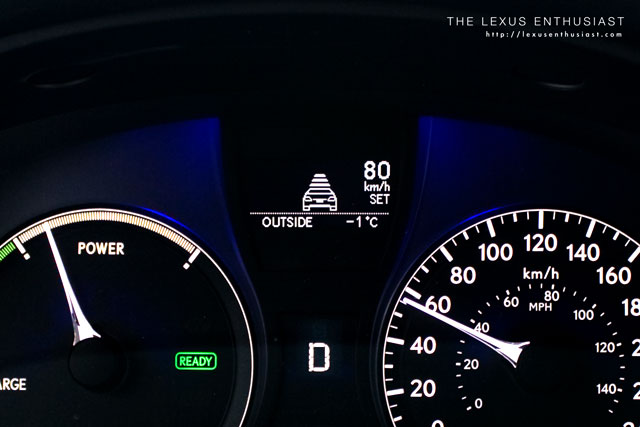 I’m really taken with the system, it does a great job at reducing highway stress.

(Still, there are some crazy people out there, which lead to a first-hand experience with the Active Safety system. After another driver swerved in front of me merging onto the highway, I heard a sharp beep and felt a deep response from the brakes along with what I thought was the seatbelt tightening. The RXh had me instantly prepared for a possible collision by amplifying my own reactions and reading the situation perfectly. Considering my expectation that the Active Safety system would feel intrusive and robotically harsh, I was especially impressed with its assistance.)

There’s been a weird learning curve with the Remote Touch controller: 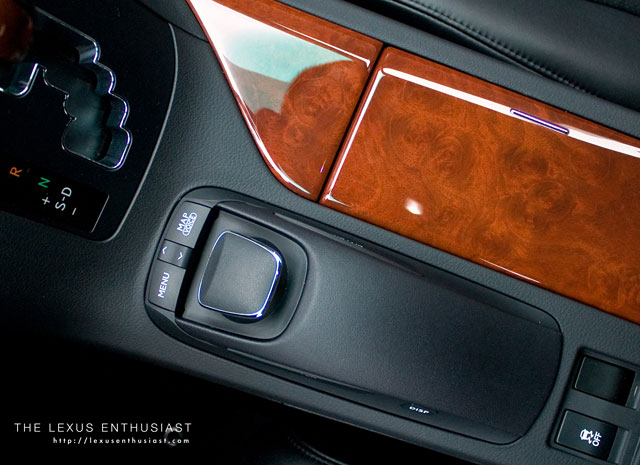 At first, I was impressed by the computer mouse interface, which feels obvious and intuitive—but after a few weeks, I started to feel frustrated and found myself wishing for a touchscreen instead. This went on for a week or so, and then my muscle memory kicked in and I came full-turn back around. Once those initial growing pains wear off, the Remote Touch system is so much better than a touchscreen—the controller placement feels natural in hand, and with its haptic feedback, it’s literally possible to navigate by touch. Whoever named the system hit the nail right on. My only complaint? There needs to be a BACK button on the controller.

The black interior is holding up, though it does tend to show the slightest dirt—a difficult situation when every single step outside is in a mixture of snow, salt and mud. On the plus side, the carpet mats and the interior are very easy to clean.

Rear storage room has yet to let me down—I picked up my in-laws’ new 40” LCD TV, and it was no problem at all: 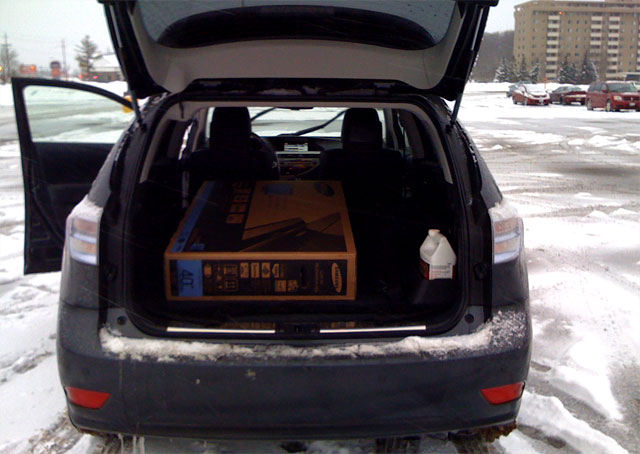 My next task is to take some proper photos of the RXh exterior, but it’s proven difficult with the poor weather. My latest idea is to take photos while out and about doing errands and the such—I’m going to try that this week and see how it turns out.

Special thanks to Lexus Canada for providing me with this vehicle for the purpose of review. The RX 450h with the Ultra Luxury Package retails for $71,400CAD ($67,150USD).