END_OF_DOCUMENT_TOKEN_TO_BE_REPLACED " /> NAIAS Live Coverage | Lexus Enthusiast
Menu
Log in
Register
You are using an out of date browser. It may not display this or other websites correctly.
You should upgrade or use an alternative browser.

This morning, the North American International Auto Show has opened its doors to the worldwide automotive press, including myself, and I will be bringing you a Lexus perspective to America’s autoshow.

I will be updating throughout the day as I go over every square inch of the Lexus exhibit, including the LFA supercar & the LF-Ch concept, and anything else that may hold interest to the Lexus enthusiast.

Updates after the jump.

Just arrived at COBO Hall, on my way to the Lexus display.

Here’s a first look at the Lexus exhibit. LFA is up on an angle—no interior shots today.

Like the look of the HS 250h modified by VIP Auto Salon:

The LF-Ch display is surrounded by three cameras that you can use to email yourself photos of the concept:

I took a break from taking photos to play with the LFA configurator, which works great with a touchscreen interface:

It wasn’t long after my last update when the battery in my iPhone died, meaning no more updates. I’m now back at the hotel now after dinner with Toyota Canada—before I call it a night, here’s a higher resolution photo of the Lexus display and just the tip of the photographic iceberg: 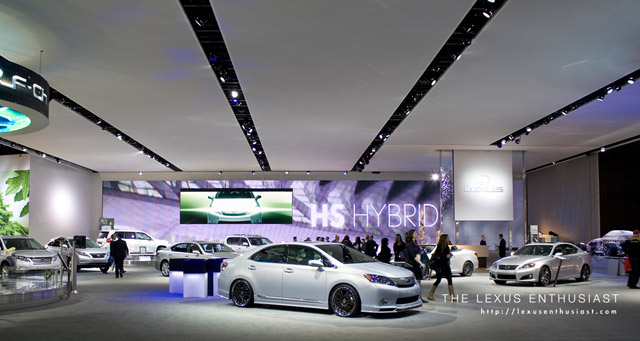 Tuesday, January 12th, 11:50pm: I’m now home after two days of automotive madness. I’ll be starting in tomorrow on the 700 photos I took, which I plan to post in photosets. More shortly.